'The apple doesn't fall far from the tree:' the candidate's kids

You perhaps recall the 2012 campaign, where Mitt Romney's sons accompanied Mitt on the stump and stood out as decent, hard working and well cultured children despite being born with silver spoons in their mouths.

We are now seeing Donald Trump's children speak out about their dad, and they are truly inspiring to listen to: well spoken, articulate and cultured.  And yes, Donald Jr., the oldest, and Tiffany, the youngest, were not only born with silver spoons in their mouths, they were born with silver coal shovels in their mouths; these kids were filthy rich when they were in diapers. 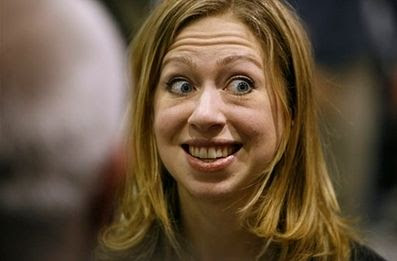 Of course, so was Chelsea Clinton.  Her parents (despite their incredulous claims of being 'dead broke') were multi-millionaires by the time Chelsea was a teenager, although perhaps she was not born uber rich.  Certainly, however, Chelsea Clinton has shown nothing of the gumption displayed by the Trump kids.

After her graduation from Sidwell Friends HS, Chelsea was off to Stanford (BA), and ultimately Oxford where she was awarded a Doctor of Philosophy degree.  Dr. Clinton was then unleashed into the world to make her mark.  Her first gig was a no-show job at NBC, where she pulled down hundreds of thousands for doing basically nothing, owing to the fact that she had no journalistic chops whatsoever.  And in the ensuing years, she has spoken on the lecture circuit in affiliation to her family's dubious 'Clinton Foundation,' which is nothing more than a slush fund to finance the Clinton's high falutin' lifestyle.  In other words, Chelsea Clinton has never really worked a day in her fabulously wealthy life. 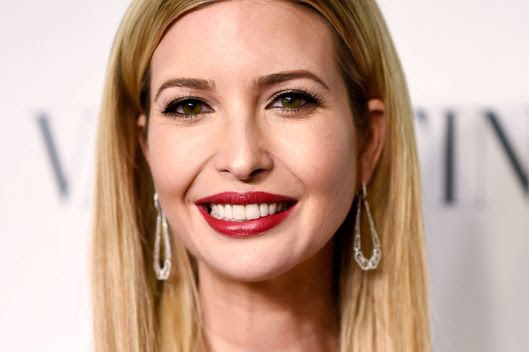 The Trump kids?  Donald Trump put these kids to work as early as the age of 12.  He urged them to rub elbows not with the management of his many companies, but with the laborers: masons, carpenters, iron workers, to get  a feel as to what kind of effort makes the real world work.  He then gave them jobs at the bottom, where they worked their way up the ladder based on merit, and not on who they were related to.  Donald, Jr. when asked a few years ago what would happen to them if they goofed up on the job, replied that if their performance started to suffer, his dad Donald Trump would 'fire us like dogs."  Results were expected and indeed achieved.  The Trump children are all involved in Trump businesses, and are not just sitting on their name, they actually work for a living.

Unlike Chelsea Clinton, who is frankly about as worthless as a screen door on a submarine.

The apple doesn't fall far from the tree.  Or so they say.
Posted by Fredd at 8:32 AM

We have to give some chops to the mothers, too. I think the reason Trump married European women (other than the unfortunate thingy with Marla Maples, which he has publicly declared a yuuuge mistake), is that often European women, in particular Slavic types, are more strict in how they raise their kids. According to the older kids, Ivana made Donald look like a pussy cat.

Not to mention they often make better wives. Speaking as a woman, I would hate to be a man looking for a wife in America. Women's lib has done the American woman no favors. It's one of the reasons I like Melania. She at all times remains a lady. Shrieking harpies like Hillary, Warren, and Mooch, are such a turn off to me.

I'm constantly amazed when I go to the grocery store and see young, overweight, and slovenly women followed by meek wussy men and a bunch of snot-nosed kids. Leave the poor guy at home with the kids and do your shopping. I don't think my father ever set foot in a grocery store with my mother. Good grief.

It's not Chelsea's fault that she was born to people of low moral character and no scruples - and predictably, she grew up to be a lazy, entitled, couch potato. Some say that Atty. Web Hubble was her sire? I have no idea. Clearly, Bill steered clear of Hillary's romantic charms for most of their marriage (said to be dry as a nun's nasty).

The apples don't fall far at all.

They all presented themselves very well. The left harps about "white privilege," but in the real world, you have to actually accomplish something. The Trump kids are miles ahead of Chelsea Clinton in their accomplishments.

about as worthless as a screen door on a submarine.

Thank you, Fredd. I needed a chuckle today.
I have to admit we were both impressed with the way the Trump kids spoke. I would hope the *never Trump* people could be open minded and listen to what is being said, but I don't think that will be the case.

I know Gary Kasparov was saying on his fb page that he saw Trump as a younger Hitler. I don't know.

Trump was not my first choice, and I don't know anything about his VP pick other than what I have read on blogs. But he is the Republican nominee and we will probably vote for him and hope for the best.

Adrienne's comment on women's lib reminds me that I have despised that movement from the start. Never saw any use for it. And my younger boys have pretty much decided there is no one out there worth marrying. The youngest will be 28 later this year. I still have hope they might be wrong in that regard.

Honestly, who would marry chelsea clinton, let alone take her to bed. And we're talking about the son of a mobster who could have his pick of women. I believe another marriage of convenience like bubba and the beast. The dude spends his time with actual women, and the prenup regards cheating is just misdirection.

Adrienne: ah, the good ol' days. I'll bet your mom licked all the S&H Green Stamps, too. Pasted them in those booklets, and redeemed them for all kinds of free goodies.

Except that those free goodies turned out not to be free, the grocery store added a 1% kick back to Sperry and Hutchinson and another 1% to your receipt for themselves.

So much for free stuff, it never lasts. Seen and S&H Green Stamps given out lately?

LL: I wonder if Chelsea would submit a DNA sample to find out who her daddy is? Maybe you should ask her.

Rip: I am getting awfully tired hearing about this white privilege business. I don't ever recall anyone ever tripping over themselves to give me a dag nab thing in life because I was white.

LindaG: Trump was certainly not my first choice, either. But neither was Jeb! If I had my way, Carly Fiorina would have been nominated.

You just hold your nose and vote for the nominee, because ALL of the Rebublican candidates are 1000% more suitable for the Oval Office than Crooked Hillary.

Kid: I don't give any thought to the Clinton love life, any of 'em. Let them swim in their cesspools of evil, and just keep it away from me.

But no. They have to let all of that slop slosh over into the public view. Scumbags, all of 'em.

The idea of white privilege is just another means that progressives use to divide up the people of the US to keep that Marxist class tension. There's no truth to white privilege. Progressivism is built on lies and deceit.

Oh, another page out of Saul Alinsky's 'Rules for Radicals,' eh Rip? I really should read that book one of these days, along with Marx's 'Das Kapital,' and Hilter's 'Mein Kampf.'

I need to bone up on leftist dirty tricks a little more. Most of them I see coming, but sometimes they hornswoggle me.

Alinsky's book is actually readable, which is why modern progressives know the tactics so well. He doesn't use very big words....

Marx and Hitler are insufferably boring. It's a wonder anyone read them at all. Well, to be honest, no one really read Mein Kampf until Hitler became famous.

Rip: hmmmm, 'Rules for Radicals,' no big words, you say? And pictures? I love pictures.

In my high school German class, we translated 'Mein Kampf,' paragraph by paragraph, but only got through the first two pages. It was incredibly tedious, Adolph used great big German words, and I swore that once I got through that class (I got 'B's), I would never pick that book up again, not even an English translation. And I haven't, but am still curious as to how a monster's mind works.

Ayn Rand is another author who just loves great big meaty words when she writes. Tedious doesn't describe the effort it takes to slog through her stuff. Ugh. And in particular, "Atlas Shrugged" has some love interests which are possibly the worst literature ever produced in the world to date. And that is saying something.

Sorry Fredd, RUles for Radicals has no pictures. The book is dedicated to Satan, however, so there's that.

Ayn Rand is tedious. I watched the first installment of the movie of Atlas Shrugged, fell asleep, and promptly wrote the whole thing off as a bad idea. That's not to say the Ayn Rand didn't have good ideas. However, I'll stick with Orwell and Bradbury and Huxley for readable dystopian stories.

Adrienne, I don't know how I missed your comment.

"young, overweight, and slovenly women followed by meek wussy men and a bunch of snot-nosed kids"

We've got that in spades in Ohio. Fat women who put as much work into their appearance as falling out of bed, throwing on shorts and a t-shirt and drag the guy to the store with the kids who are dressed in dirty clothes and look about as happy as animals in a zoo.
It is hard to believe they looked like that when they got married. It's not something I'd put up with. Even though the guys generally look like losers, there is only so much a person should be able to stand. It seems like a fairly recent phenomenon and it does not speak well for future America.