Elites pave the way for their kid's college..... 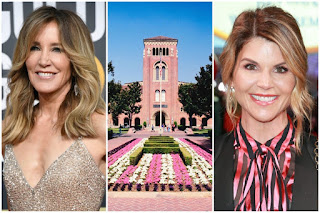 We are as a nation shocked...SHOCKED!!!  Rich celebrities fudge their kid's application process into elite colleges, what outrage!!!  Then we all wonder if it was our kid's slot that was stolen by these rich ass wipes who bought that slot, which should have been available on merit only (yeah, right.).

Did anyone ever check George H.W. Bush's merits when he applied to Yale (his daddy was Sen. Preston Bush).  I don't think so.  No need, everybody knows 41 was the smartest guy ever to trod the soil (not).  How about his little boy Dubya's credentials on his application to Yale?  No need, everybody knows Dubya was brilliant (yeah, right).  And Chelsea Clinton's application for admission to Stanford?  Did that ever see the light of day?  No need, she's brilliant.

What took everybody so long to get indignant about this?  It's been going on since man crawled out of the ooze: huge caveman rises to the head of the tribe owing to brute strength, then hands the club/pointy stick over to his son when the time comes.  Who saw that coming?  Everybody, that's who.

The news desk chief interviews a bunch of folk to anchor the evening news broadcast: he picks the tall young handsome guy with cleft chin, chiseled good looks and full head of hair, and rejects the bald old short fat guys who also applied.  Shocking, isn't it?  It should not shock anybody.

Skinny little pencil neck 98 pound weakling applies to sumo wrestling school: his application gets lost, but several 500 pounders behind him in line are escorted right in, no waiting.  Discrimination, we shout!  Shut up, you dopes: this is the way life works.

And yet the headlines screetch: "Elites pave the way for their kid's college admission."  As shocking as "Dog bites man."  Or, "Trunk full of votes found in Democrat's car trunk, and he wins election."

Wake up.  This is how things always have been, are and always will be.  I'm not saying it's the way things SHOULD be, but dumb ol' Fredd is nothing if not a practical, realistic cynic.