How to solve the Israeli-Palestinian conflict - guaranteed to work.

This conflict has been going on since 1948: vagrant Arabs see Jews as making something of their desert they moved into that was formerly infrequently inhabited by migrant Bedouins. And even these Bedouins didn't stay in one place in the desert that is now Israel for very long.  It was just too desolate.

Now it is an industrial and political powerhouse.  And the vagrant Arabs want it back.  'Right of return' my butt.  Nobody to speak of ever lived there before Israel was formed, and everyone knows it.  These vagrant Arabs who now call themselves Palestinians were in reality Jordanians, Lebanese, Egyptians and Syrians.  They were never Palestinians, ever.  There was no Palestine, other than the area that consisted of western Jordan, northern Egypt, southern Syria and later on, southern Lebanon.  There was no country called Palestine.  There just wasn't.

But now, these angry Arabs have sworn to wipe Israel off the map, nothing less, and take back Palestine (which they never owned to begin with), now that Israel has put the energy and money into the land to make something of it, where before it was nothing but a desolate wasteland.

There can be no peaceful co-existence.  There never will be.

Solution?  Easy, piece o' cake.  Let the conflict begin in earnest. Let the combatants loose, and let the bullets fly.  May the best army win.  And the winning army will not win by avoiding civilian casualties.  The winning army will decimate the other's will to fight once it has demonstrated that it can annihilate them.

Works every time it's tried.  Always has, always will. May the invention of the 'surgical strike' pass into oblivion as the surest way to lose a war in the long term.

Just let 'er rip.  Like I said, may the best army win.

A visit to San Francisco: behind enemy lines.... 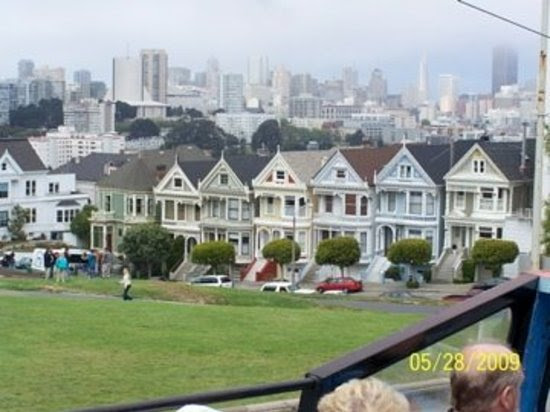 I just returned from a four day stint in the City By The Bay, home of Barry Bonds*, Al Capone and Nancy Pelosi.  Yes, four days in San Francisco to celebrate my niece's 16th birthday.

This was not my city of choice to spend any time in whatsoever, but there was no convincing a 16-year old that there are communist outposts in the U.S.  Even if she did believe me, she didn't care.  We went anyway.

During my brief encounter behind enemy lines, I was fascinated by what I saw and heard: a city that is in its death throes, but doesn't know it yet.

Our cabbie who took us from the airport to the hotel near Fisherman's Wharf (obviously a gay guy) was explaining with great delight his rental digs up on the hill overlooking the town was rent controlled: he was paying around a $1000/month, as he had been in this apartment for over 30 years, while his next door neighbor was paying 'market price' for identical digs: $5000/month.

I chose not to get into it with 'Gary the Cabbie,' about the effects of price controls and that they simply don't work in controlling prices (just ask Gary's neighbor).  Sure, they are working for Gary, since he's already got his, but they are not working all that great for his neighbor.  I am sure Gary doesn't give a damn about his neighbor, but that is the subject for another day.

We took the 'hop on, hop off' bus tour of the city, and saw all the sights, to include:

This city will someday collapse like any other socialist society in human history.  The bums will overwhelm all available resources (the paradox/tragedy of 'The Commons'), and all of this free stuff will go away, and most likely not peacefully.  Those bums are pretty aggressive in San Francisco and will most likely not go away quietly into the night.

Nepotism is alive and well on Fox. Peter Doocy didn't need to start at the bottom and work his way up, why go through all of that when your dad can pull some strings and get you a gig on a top rated national news broadcast right out of college.  I can't help but shake my head in disappointment each and every time I see the no-talent son of Fox and Friends morning co-anchor Steve Doocy's covering a story.

Steve Doocy must have embarrassing photos of Fox chief Roger Ailes, because Roger is the consummate professional when it comes to running a news program.  He knows that the heavy weight talent that people tune in to for their news should not include a snot nosed, wet-behind-the-ears greenhorn like Peter Doocy.

This kid looks like Richie Cunningham of 'Happy Days' trying to act like Walter Cronkite.  It just doesn't work.  The kid has as much talent and looks as anyone off the streets, but unlike Joe Average, he has clout in his dad pulling for him to keep him on the air.

Remember these Fox guys hammering Chelsea Clinton when she got her short lived NBC gig?  Remember them saying the very same thing I am saying about Peter when reporting on this blatant nepotism in Chelsea's hiring, relying on dear ol' mom and dad to pull some strings at NBC?  I recall Steve Doocy ticking off the many low rent TV gigs he had prior to Fox and Friends, and that nobody handed him the job without putting in his dues as a  weather guy in Dented Pig, Wyoming, then moving up to a larger audience in Butte, Montana, etc.  (no, these are not really Steve Doocy's early gigs, but you get my point).

Note to Roger Ailes: unless Steve Doocy really does have those aforementioned photos, you need to dump his rookie son and get someone on air with some street cred.  And looks.  And talent.  You know, somebody who paid their dues.

For what it's worth.