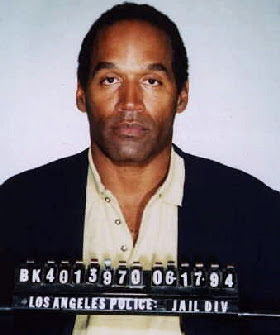 Former Penn State football coach, the late Joe Paterno has now joined a rather exclusive club of those once mighty who have fallen to the depths of public hatred.

Nobody will remember Joe Paterno as the coach who won more Divison I college football games than anyone else in the history of the sport.  Nobody will ever remember that his teams had some of the highest graduation rates among the sport.  Those spotless credentials will never, ever be brought up again in the same sentence with the hated Joe Paterno.

He will only be remembered for his shameful protection of a pedophile on his staff, overlooking the safety of children in his efforts to keep his legacy and that of Penn State's clean.  Joe Paterno himself is now one of the most hated men in football history, perhaps trailing only OJ Simpson in that regard.

OJ himself is very similar to JoPa: nobody will ever remember his Heismann Trophy OJ Simpson won at USC.  Nobody will every remember his record breaking 2,000 yard rushing season as a running back for the Buffalo Bills.  None of that ever comes up when speaking of OJ.  He is only remembered for murdering two people in cold blood, and getting away with it.

Also included in this club is Richard Nixon.  Nixon was one of the most successful politicians in U.S. history.  Is Richard Nixon remembered for serving nearly two decades as one of the leading members of the Republican Party, two terms as Vice President of the United States, and two successful elections to the Presidency of the U. S.?  Nobody remembers any of that.  Nobody remembers Nixon opening the trade doors to China through 'ping pong diplomacy,' nope, that stuff has been buried forever when talking about Richard Nixon.

Nixon is only remembered for the Watergate cover up, and his fall from grace in 1974.

Joe Paterno has now joined that loathsome rogue's gallery of the once mighty who have fallen farther from grace than anybody else in our culture's memory. 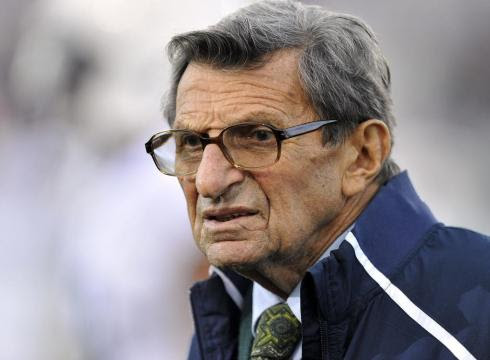 And Joe Paterno deserves this scorn.  He was a monster.
Posted by Fredd at 7:35 AM 5 comments: 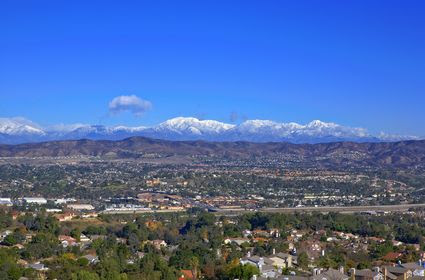 San Bernadino, California (or as some locals would say, San Berdoo) is on the verge of seeking protection under section 9 of the bankruptcy laws in California as a severe cash flow crunch almost halted payroll checks in the month of June.  City officials are on the brink of filing for bankruptcy because they knew that July's payroll would simply not be met owing to the crushing burden that public sector union benefits had on San Bernadino's financial situation.

This list of bankrupt cities is getting longer.  And there is no end in sight to municipal bankruptcy filings.  California leads the pack in these filings, since their public unions have been running amok for decades in their demands for opulent retirement packages for 52 year old employees, free health benefits and the like.  They now have sucked their communities completely dry.   Now, with benefit checks in doubt pending a court sorting out the mess that these unions have created, these young 52 year old union retirees are up in arms.

"We had a deal!!," they scream.  Yes, their public sector union thug leaders coerced unsustainable agreements over the years from hapless city politicians, who were successfully able to kick the can down the road for decades in sustaining these unsustainable agreements, but unfortunately for these angry retirees, the days of wine and roses are over.

Chicago, Illinois is speeding headlong into this same downward spiral, and an angry 52 year old retired paramedic shouted these very sentiments to a Chicago talk radio show the other day, screaming that he planned his whole life around these agreements, and if somebody wants to change things now, they will have to deal with him face to face.

Face to face.  With a screaming retiree demanding money.  And that is the only way that these young 52 year old retirees are going to keep the checks rolling: ultimately demanding payment while screaming at anyone who has ('their') money from the barrel of a gun.  They seem to understand that when the municipality stops sending checks because there is no more money, that somebody has to be forced to pay, whether they want to or not.  And that would be the funders of the municipality: us.  You and me.

In the long run, if these public sector employee unions are not reigned in from their terrorism of our cities, towns and counties, we will be facing armed bands of union retirees demanding money from us.  And if we don't pony up, there will be consequences.

Which side of this issue are YOU?  The end of the road is in sight, and that can can no longer get kicked down the road.
Posted by Fredd at 5:13 AM 8 comments:

Food deserts.  What?  This bogus phrase concocted by Michelle Obama brings to mind the image of the ragged, tattered wretch crawling across the desert in search of water, croaking ‘water…..water…..’


The ‘food desert’ Michelle Obama cites is in her old stomping grounds of South Chicago.  Do we see the scrawny, ravenous skeletal wraiths crawling down Michelle’s neighborhood, crying with feeble wails 'broccoli,....I need broccoli...', lest they simply dry up and perish?  On the contrary, in Michelle’s neck of the woods (Chicago), we mostly see morbidly obese folks sitting on their porches, stuffing their faces with Cheetos (purchased with food stamps, duh) and washing entire bags of the stuff down with Orange Crush, their folding chairs nearly buckling as their occupants corpulent bellies hang down to the ground.


And these are the victims living in the middle of Michelle Obama’s ‘food deserts.’  Michelle Obama is concerned that for too many of these corpulent Democrat constituents, fresh fruits and veggies are simply not available within walking distance of her husband's pudgy voters (just a side note: her husband's waddling constituents are able to walk perhaps half a block before the exertion forces them to seek the first available folding chair, bag of Doritos and six pack of Mountain Dew).


The truth of the matter (of which concerns Michelle Obama not one bit) is that fresh fruit and veggies are indeed available within bus distance of every Obama voter in Chicago, since Chicago Obama voters don’t feel the need to have cars, or walk very far for their Twinkies.  What Michelle fails to notice is that most reputable vendors of fresh fruits and veggies have concerns about placing one of their stores in her constituent’s neighborhoods, where the likelihood of them getting robbed and beaten on a weekly basis is very high.


The desert that Michelle refers to is not a ‘food desert.’  It is a morality desert.  It is a decency desert.  It is a capitalism desert.  Lately the murder rate in these neighborhoods exceeds the death tolls seen in an active Afghanistan war zone.  It is more likely you will die in South Chicago if you are out and about on the streets than if you are on patrol in Kabul.


Since Obama’s beloved Democrat Party with it's socialist liberal policies has in exchange for votes put itself in the place of providing food and shelter for most of the primarily black inhabitants of South Chicago instead of a loving husband and father, the black family has deteriorated into chaos.  Illegitimate births are the norm.  Kids without fathers are seeking guidance from gangs rather than fathers.  And the murder rate is out of control, and Michelle wrings her hands about why this is so.


This is the 'responsibility desert' that Michelle laments.  And it is a desert of her, her hubby and their ilk’s own making.