Polls, schmolls. This election is a referendum on Obama

I'm old enough to remember the 1980 election, and worrying about Jimmy Carter getting his sorry butt re-elected.  I recall the polls a few months before that election putting Jimmy back in the Oval Office by double digits, according to the polls.  Doesn't anyone remember that besides me?

And what happened?  Jimmy Carter lost in a landslide to Ronald Reagan.  One of the worst landslide losses in American history.

As Yogi Berra put it, it's like deja vu all over again.  I've seen this before, not all that long ago.  A really terrible first term president who couldn't manage his way out of a wet paper bag on any national issue up in the polls, with the 'underdog's' supporters wringing their hands and biting their nails.

The economy stinks.  Just ask anybody (except Jay Zee and Beyonce).  Obama's foreign policy stinks.  Just ask Israili PM Bebe Netanyahu. Just ask the dead Libyan ambassador and all of those millions of Osama's in the Mid East (we all saw them chanting 'we're all Osama's now, Obama,' was I the only one who heard that?) what they think of Barry's foreign policy.  Go ahead, ask them.  Obama's domestic policies stink.  Just ask the 60+% of us who loathe Obamacare and demand its repeal. Just ask the 53% of us who still pay federal income taxes.

You might want to read Hack Wilson's latest take on the real skinny (http://hackwilson.blogspot.com/2012/09/2012-election-prediction-mitt-romney.html) as Hack digs deep into the numbers and has a credible analysis of the way things worked out in the past.  I'm just basing my opinion on what I see as to the Zeit Geist's mood, and what my aging eyeballs actually saw happen back in the day.

Polls, scmolls.  Did anyone see the landslide Republican wins coming in November 2010?  No, not really.  Did anyone dream of Republican off term wins by Bob McDonnel in Virginia,  Chris Christie in New Jersey and particularly that pickup truck driving Scott Brown in Massachusetts?  No way, Jose.

Romney wins in November 2012, and he wins big because this election is flat out a referendum on a failed Barack Obama first term.

The phony baloney negotiations between Rahm Emanuel and the Chicago Teacher's Union.

Karen Lewis vs Rahm Emanuel: Hard core liberal Democrat politican up against a hard core liberal Democrat union leader.  Almost everybody outside of Chicago can see what kind of ridiculous, non-existent confrontation is going on here.  This stupid circus is for only one set of eyes: the dumbest population living in any metropolitan area within the United States of America.

Chicago, the county in which encompasses Chicago (Cook County), and the State of Illinois itself are all dead broke, penniless, and completely bankrupt.  The Chicago Public Schools have an unfunded pension liability in the untold billions, are deep in the red as to their net assets (minus 1.2 Billion dollars), and the total bleak story can be seen in the Chicago Tribune article "CPS finances tell a grim tale" (chicagotribune story here).

And yet we would be led to believe that the brave, fiscally responsible Mayor Rahm Emanuel is holding the line against these greedy selfish union thugs and their demands of ever more tax money to fund their lavish pensions, existing salaries plus a 31% raise over four years , lax work rules during their 8-month work year of showing up in the classroom from 9 until 3, where 80% of their students can't read, write a complete or meaningful sentence, or add two plus two.

All of the union tomfoolery I mentioned above is true.  What is not true is that Rahm Emanuel is holding the line against union greed: he is completely in the tank with union interests.  The teachers walked out on Rahm's offer of a 16% raise over four years.  Rahm is offering raises to a broken system with money that doesn't exist.  Both of these sides are fiscally irresponsible.  There is no money.  Chicago is broke.  The Chicago Public Schools are broke.  Cook County is broke.  Illinois is broke.

Not so, says Karen Lewis.  "The CPS is awash in cash.  It's just in the wrong hands."  If this were true, which it isn't, what difference would it make if all of this cash that the CPS is awash in were in a liberal Democrat politician's hands, or in a liberal Democrat union leader's hands - none of this cash would go towards the public good.  It would disappear faster than a case of Scotch on the Kennedy compound.

Regardless, these guys are sparring over how much money they can borrow to pay a pack of worthless, crappy teachers who already make $76K on average per 8 month year, compared to an average Chicago citizen who makes around $46K per year.

You idiots!!  Every damn one of you in Chicago are dumber than a bag of hammers.  These two liberal Democrats, Rahm Emanuel and Karen Lewis, are driving your town into further ruin and bankruptcy.

Everybody in the country can see this except you morons.  Chicago finances are going up in flames, and Rahm and Karen Lewis are arguing about how much gas to throw on it.

Chicagoans, you all deserve these two thugs.
Posted by Fredd at 9:55 AM 11 comments: 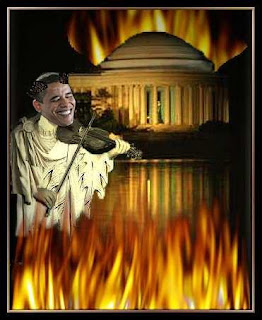 Obama and Nero have much in common: they both watch with bored indifference as civilizations crumble.  Nero liked to pass the time with his fiddle, or so it was told, and Obama is likely on the golf course as the Mid East erupts (again).

Obama is staking his re-election on two episodes: Bin Laden is dead, and GM is alive.  Both of which he really had nothing to do with, other than to get dragged into both decisions.  Apparently he had to be urged three times by various defense poohbahs to pull the dang trigger, and he finally did.  And with GM, recall that it was George W. Bush who initiated that fiasco.  Obama just made sure that the GM bond holders got the shaft, and that control of the company was firmly in UAW hands.

If you call those his shining moments, I would hate to see what would happen should all hell break loose.

Oh, wait a minute.  Hell has already broken loose.  Mid East Islamic thugs have just committed an act of war, and murdered our Libyan ambassador.  Our Cairo embassy was under assault the day before.  Obama snubs meeting with Israeli Prime Minister Netanyahu yesterday, saying he's just too darn busy keeping the world safe for democracy and can't squeeze Bebe into the schedule.

Good thing we have the Weasel in Chief calling the shots, don't you all feel comfy, cozy and secure knowing that Barack Hussein Obama is at the helm?  I am quite sure he will bungle this mess just like he bungles about everything that comes across his desk in the Oval Office.

I can't wait for November to come so we can fire this idiot.

Private vs Public management of resources: a study of camping

Recreation vehicles such as motorhomes and travel trailers are as popular now for vacation camping than ever before.  The demand for them, despite the economy, is on the rise.  And when mom and dad want to take the kids out to enjoy the great outdoors, and yet not subject themselves to roughing it in sleeping bags under the stars, these RV's are the way to go.

Although these RV's are mostly self contained and can be driven out to the wilderness, to get the most out of the amenities onboard, an RV site that has 'full hookups' is optimum (meaning electric power, water supply and sewer hookup).  Demand for these sites are also on the rise with the demand for RV's, and the private sector is always happy to please a profitable market.

But most if not all federal, state and county parks also have RV sites, and these sites differ immensely from the private sector RV campgrounds in the following ways:

In general, the government sites are managed by people that simply don't care that you never come back: they will still get paid, and probably get a larger budget the next year regardless of attendance.  They will never expand (only the personnel roster will get bigger), and will only spend their money on the existing property regardless of the need. Most of the increase in the budget will go into air conditioners for the entry booth, air conditioning and new roofs for the administration buildings, and brand new shiny camp cars and trucks.  Typical government campgrounds are paved, and have pristinely maintained sites, using 10 times the manpower that the private, gravel road equipped mom and pop sites use.   Private campgrounds need to make a profit, and go out of their way to ensure that the campers enjoy their stay and will return in the future.

The revenoors don't give a damn whether or not their patrons drop dead: as long as its not on their site, since that would be way too much paperwork to deal with your dead body.  And when you are still alive and breathing on their state or federal park, you better toe the line or the revenooers will be crawling down your throat in the blink of an eye.

That, of course, is a rhetorical question.
Posted by Fredd at 11:37 AM 3 comments: