Sympathy for workers on strike... 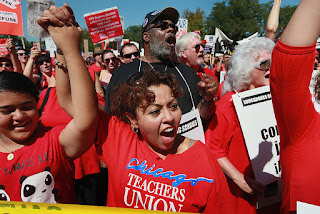 ...and I got none.  I particularly have no sympathy for public employees who go out on strike, like the Chicago Teacher's Union now on strike for more, more, more.....

These greedy bastard were offered a 16% raise over 5 years, not bad considering they only work 9 months out of the year, have some of the most opulent benefits packages available anywhere on earth, and can never get fired for any reason, except maybe murder - and even then, the union fights tooth and nail to keep these murderers on the payroll.

Nope, 16% pay raise?  Uh-uh.  No way Jose.  They want way more than that, in addition to guaranteed affordable housing forever, and a few other ridiculous demands, or they walk the picket lines.

The strikers at General Motors are slightly more sympathetic, but not much.  They are going up against a management structure of a private enterprise that determines their compensation, and that does not affect the general public directly: if GM's products are not available owing to a strike, we can always buy a Ford, a Chrysler, a Volkswagen or a Porsche.  No biggie.  And GM, should they choose, can just fire all of these strikers and hire scabs, completely legal.

Not so with striking public unions: yes, like Ronald Reagan fired all of the striking air traffic controllers in the 1980's, that option is not on the table for public school districts.  And parents cannot simply enroll their children elsewhere in the event that their local schools remain on strike.  Nope, these kids are held hostage by these rotten public unions and there is nothing mom and dad can do about it, not really.

As contrasted with private companies and their unions, public employees are not striking against and demanding concessions from private employers.  No siree Bob.  They are demanding concessions from the taxpayers.  And yet we tax payers already put in place public employees to manage our public schools: the mayors of the cities.  These elected officials are our representatives regarding educational resources, and when public school unions decide to buck what the duly elected mayors have established as reasonable compensation, they are bucking us - John and Suzie Q. Public.

To hell with them, I say.  Fire the lot of them, send them screaming into the night and force them to eat out of dumpsters.  If they want to play hardball, well then welcome to the NFL.

I used to be anti-union until I had to join a union to find work. After a few years, I came to the opinion that most companies that had unions deserved them, since they were as corrupt as the unions. As for public employee unions, they should never have been allowed in the first place. Such jobs used to be considered where you worked until you could get a "real" job. It should have remained so.

Gorges: I suppose you have a point - if a company treated its employees well from the beginning, a union would be unnecessary.

And we can thank JFK for allowing public employees to unionize. Worst mistake ever, by any president as we can thank that little boo boo for our massive public debt ($23 TRILLION dollars and counting...)

Hnestly, who in the hell allowed public unions. They rape us even more than the feds do imo.

Kid: see above, President John F. Kennedy did. A pox on his memory for that.

Saw that a couple seconds after I commented. Dang you JFK ! No doubt a ploy to buy dem votes.

Kid: OF COURSE it was a ploy to buy Dem votes. A short term blunder for short term gain by a Democrat who has passed from the scene 60 years ago, and we are left with his mess today as we speak: $23 TRILLION dollar public debt.

Effing democrats, I tell ya.

Democrats have left us with EVERY life sucking problem we have today.

Teachers' Unions? A sort of bloc representing teachers... shouldn't they be sued for the DISGRACE that is our education system? Seriously, every one of them, held financially accountable for the garbage that is public school education.

Pastor: Yes, a RICO suit is surely applicable here. And another yes - it's high time that teachers were held to account for their product (which is pretty dag gum crappy, excuse my French)

The smaller districts have learned not to strike, after some districts hired out of town/substitute/retired teachers to break the strike.

What can the city do?

Break the district apart, giving each mini-district sectors of the city. Outsource the functions of the district offices. Current employees - HR, payroll, maintenance, curriculum support, etc. - may apply to the new employers for a job, citing their experience. SOME will be hired, most will not.

Right there, a major source of school expenses is cut.

But, the best part is that these new reconstituted districts can arrange for staggered contract expiration dates, allowing temps to be brought in to break unreasonable strikes.

Linda Fox: I could support your suggestions. There might be some kinks to work out, but they sure as shootin' are better than the stranglehold the teacher's unions have over urban kids and their futures.