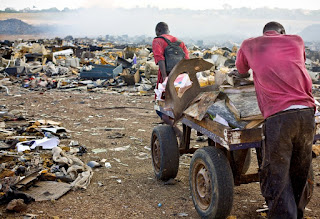 Yes, the Golden State has crossed that threshold: it is no longer simply a misguided state that is in need of adult supervision.  It has now progressed into a full fledged 3rd world country.

In-flows of illegals have swamped the social safety net long ago.  Emergency rooms at hospitals now resemble Cuban waiting rooms with sick illegal aliens piled to the ceilings waiting for a nurse practitioner to come by with a Band-aid and an aspirin (to treat a broken arm caused by another illegal immigrant pushing them down into the street after stealing their shopping cart filled with all of their worldly possessions).

The San Joachin Valley used to be the bread basket of America, and it's now dried up because politicians chose to protect the snail darter from extinction (huh?) and let millions of acres of productive farmland dry up as they diverted irrigation water back out to the ocean (huh?).

Forest fires burn out of control as politicians have buckled to leftist organizations such as the Sierra Club's demands that clearing brush and over growth from forests be halted in order to save the environment (huh?).

Now PG&E (Pacific Gas and Electric, the villain in "Erin Brockovitch") is cutting off electricity to around 800,000 Californians to preemptively avoid catching anything on fire during high winds and dry conditions (which California is known for most of the year).

People in 3rd world countries have it better off than many Californians currently.  And we can attribute all of California's woes to their affinity to elect and re-elect liberal politicians state wide, from dog catcher to governor.  Year in and year out.

You would think they would learn.  Nope, no learnin' goin' on in The Golden State.
Posted by Fredd at 9:21 AM

Sowing the wind and reaping the whirlwind.

Gorges: or, in Biblical terms, 'as ye sow, so shall ye reap.'

Don't know why I haven't stopped by here before; I see your comments over at LL's blog all the time.

Before we ( my wife { female } and I ) moved to Oregon, we lived in Chicagoland. Perhaps we passed each other, all unkowning. Such is life.

Yes, it’s all of those things, but we’ll all be dead in 12 years, or is it ten now? I think that is the core of their argument.

But Fredd, don't the rulers live in mansions, well supplied with electricity, running water and walls to keep away the great unwashed?

Now as a resident of the People's Republic of Oregon, I still think you should stop drinking the water - use Evian because the stuff out of the tap causes brain damage. It must, since most all Oregonians are nuts but just don't know it. Since everyone around them is nuts, they figure that is normal.

LL: then again, we should all have been dead or at least starving by 1980, right? Socialist/Communist scientist Paul Erlich said so in his 1968 doom and gloom publication 'The Population Bomb.'

Now a failed bartender is predicting death for us all in 10 years (yes, she said 12 but that was awhile ago). I suggest you take their predictions with a grain of salt. Or better yet, ignore their validity completely because they have been wrong about our impending demise time and time and time again.

Padre: of course the rulers (our betters) live in luxury, as they well should. We need them to wake every morning to champagne and truffles so that they are refreshed and ready to make all of those decisions required to keep the Great Unwashed in line. Without them, the rabble wouldn't know what to do. We need to keep our betters in the lap of luxury, right?

Yes, that's how socialism works. It works pretty great for our betters, and as for us - The Great Unwashed? Meh. Ask our betters if they care whether the rabble fares well or not under their leadership. They will say they do, as they have their servants spoon feed them their morning caviar. Not enough caviar to go around, your Bettership? "Let them eat cake," they say. Sound advice for the ages.

I really do expect California to collapse like a house of cards one day. You can't do stupid evil stuff forever and survive, but then look at all the democrat run areas that continue on like an infection that just won't go away.

"Now as a resident of the People's Republic of Oregon, I still think you should stop drinking the water - use Evian because the stuff out of the tap causes brain damage. It must, since most all Oregonians are nuts but just don't know it. Since everyone around them is nuts, they figure that is normal."

Fredd: I think that you may be judging all Oregonians by the inmates of the three largest cities in Oregon. Those of us who live in the smaller communities are not quite so nuts. One of the side benefits of living in a small town is the drive to the larger towns to shop. The beauty of the countryside makes the drive enjoyable, at least if one is not doing the driving. One can mostly avoid the crazies where I live, if one avoids their gathering spots at the appropriate times.

I lived about 60 miles SW of Chicago until 1982 when I moved to (then) California.

In the 35 years I lived there I watched it slide downhill to become Kommiefornia, where the middle-class gets taxed at obscene rates on everything, and the illegals just skate along.

One of my good friends was a Roof Korean at his uncle's store during the last unpleasantness, and said the had to, because the cops were nowhere to be found.

The countryside is still nice, when not burning, but all the big metro areas have degenerated from Kommiefornia's Golden Age of the 50's~80's.

Fredd
You overlooked taxes on gasoline.

Of course I am judging all Oregonians by the politics of the three largest cities. That's typically how things are run in states; the masses congregate to those centralized points where it is easiest for the government to distribute the government cheese.

And so goes the rest of the state, by the choices of the mobs in the cities. I wish it were not so, but it is so. Of course there are non-nuts in Oregon; they are in the minority and likely will always be.

I live in a beet red county (at least as far as presidential elections go), and surrounding counties to me are beet red as well. That doesn't seem to stop all of our statewide elected blue officials from voting for commie socialist pinko policies/taxes/fees, etc. Chicago drives politics in my state of Illinois, and the rest of us suffer accordingly. Will that ever change? No, it will not.

Dr. Jim: 60 miles SW of Chicago would put you near Ottawa, maybe Morris, in that neck of the woods.

Kid: as the late great economist Herbert Stein used to say: "if things can't go on, they won't." Or words to that effect.

But look at Detroit: the zombie city. It is dead, economically, but doesn't know it. It has been bankrupt for a decade (or more?) and yet the zillions of state and city retirees are still cashing checks. Where that money is coming from is the stuff of miracles.

One of these days (later rather than sooner, sadly), those retirees are going to go out to the mail box, open it and find there ain't no check. Nor will there be any more checks.

Now THAT is when the poo hits the fan. We'll see how the citizens view socialism at that time. Should be fun.