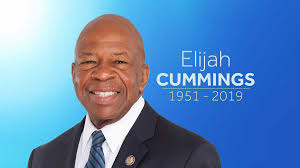 Yes, a 'great man.'  Those words will probably be chiseled on his gargantuan tombstone in front of his enormous mausoleum, a tomb fitting of Great Men who have passed unto the hands of the Lord.

Because he was a Democrat, all of Elija Cummings failures will be swept under the rug, never to be discussed again.  Ever.  There is still the issue of the missing $1.5 BILLION dollars that was ear marked to ease the blight in his district of Baltimore, but not one penny of that $1.5 BILLION dollars was ever spent anywhere near Baltimore and has not been seen anywhere else, either.  Not yet, at least.  And certainly Baltimore remains the rat infested hell hole that it has always been, or for at least the last 50 years or maybe more.  I would think that $1.5 BILLION would go a long way towards solving at least a few of Baltimore's myriad of problems.

Had Elija Cummings been a Republican, this would be the issue chiseled into his tombstone.  "Where is the $1.5 BILLION, Elija?  Rest in Peace".  But none of that will happen, because Elija Cummings was a Democrat.  A black Democrat at that.  He will be remembered as a 'great man.'  A leader of the Civil Rights movement, who was there and was down for the struggle in Selma.

There have been other 'great men' who's reputation in America's eyes are that of ogre, criminal and malfeasant.

O.J. Simpson was a great man.  Huh, you say?  That double-murdering thug who beat the rap and is now the most hated man in America, THAT O.J.?  Yes, that O.J.  Nobody recalls that while a running back at USC he was setting rushing records en route to a Heisman Trophy.  Yes, that O.J. who when playing for the Buffalo Bills was the first man to rush for over 2,000 yards in a single season.  Yes, that O.J. who charmed his way into the movies and was seen in Hertz commercials hurdling over luggage and wandering up and down the sidelines on Monday Night Football, microphone in hand, yes that O.J.  We all loved O.J.

And now all of that is forgotten.  He is a hated double murderer, the scum of the earth.  But he was a great man, once.  Not anymore.

What about Richard Nixon?  Huh, you say?  The lying criminal ex-president who covered up the heinous crime of some of his stupid cronies who broke into his opponents offices seeking dirt?  Yes, that Richard Nixon.  Nobody remembers that it was Dick Nixon who was the avowed enemy of communism back in the 1950's during the Red Scare.  As vice president under Eisenhower, Dick Nixon was the lead man to beat back the commie scourge that was creeping into our government.  He was the great man to cede the presidential election in 1960 to JFK and not contest the Illinois vote count that then Chicago Mayor Richard J. Daley conjured up from graveyards and death certificates on file in the Windy City.  Those votes from dead people, had they been tossed, would have put Dick Nixon over the hump. would have landed all of Illinois electoral votes into the Nixon column and not the JFK column, and he would have been elected president in 1960.  He chose not to sink the U.S. into that quagmire 'for the good of the country.'  (unlike Al Gore, who sued Dubya over the Florida vote...and we are still seeing the seething rage of the left owing to the decision going Dubya's way to this very day).

Dick Nixon is the man who, through 'ping pong diplomacy' opened up the Chinese markets globally after meeting with Chow En-Lai and other Chinese heavy weights.  Dick Nixon also ended the U.S. involvement in Vietnam, a war started by Democrats to feed what Eisenhower a few years earlier warned us about: the military industrial complex.

Yes, Richard M. Nixon was a great man.  But what do we remember him as?  "I am not a crook" crook.  And yet all he did was stick up for his guys, for better or for worse.

Yes, both of these guys were Great Men.  Orenthal James Simpson and Richard Milhouse Nixon. Not anymore.

Elija Cummings is now at the right hand of Jesus.  A Great Man.  I am still wondering where that $1.5 BILLION dollars is.  That kind of money demands an investigation.  But that will not happen, not to a 'GREAT MAN' like Elija Cummings.

I liken Elija Cummings memory to the likes of other Great Men, such as O.J. and Tricky Dick.
Posted by Fredd at 7:30 AM

Cummings is likely not at the right hand of Jesus, but has been handed a shovel with a never ending supply of coal to stoke the fires of Hell. Still, it's not for me to judge the thief.

He's celebrated for being a negro. To me, that's really all he accomplished, other than to amass a fortune at public expense. I guess there are talents there. Professional crook and politician, but I repeat myself.

Nixon was a disappointment as a man on a personal level, but was an excellent president. He deserves better. His only REAL sin was being a republican with a democrat news media.

LL: I think we can both agree that he excelled at being a negro. That, and that he and his wife are wealthy beyond what public servants should normally achieve.

As to where he resides in the after world; at the right hand of Jesus, or stoking the eternal fires of hell, I guess those of the cloth might better be suited to speculate.

Gorges: Nixon was a great man, and I cannot be persuaded otherwise. Faults? He who is without sin can cast the first stone. I heard that somewhere...

Cummings is gone - that is enough.

Fool: it's not enough, but it's a start.

Ah, Fredd. I remember the Nixon/McGovern race and the impeachment, but only just. That's as maybe, what will Elijah's widow do to pay back all that money? ON HER OWN.

Padre: the Widow Cummings will very likely do just fine and live out the rest of her life in opulence and luxury, as she deserves.

All defecrats are pure evil. I'll admit it, I cheer for their early demise - All of them. They're all Satan as far as I'm concerned and what the hell is wrong with that. Screw his family and friends too, and all the rino's declaring him a 'great man'.

I hope I was clear on that.

Kid: OK, so I'll put you down as a 'maybe' as to whether we should characterize Elija Cummings as a great man, or as a scumbag.