Pacifists in power cause massive deaths 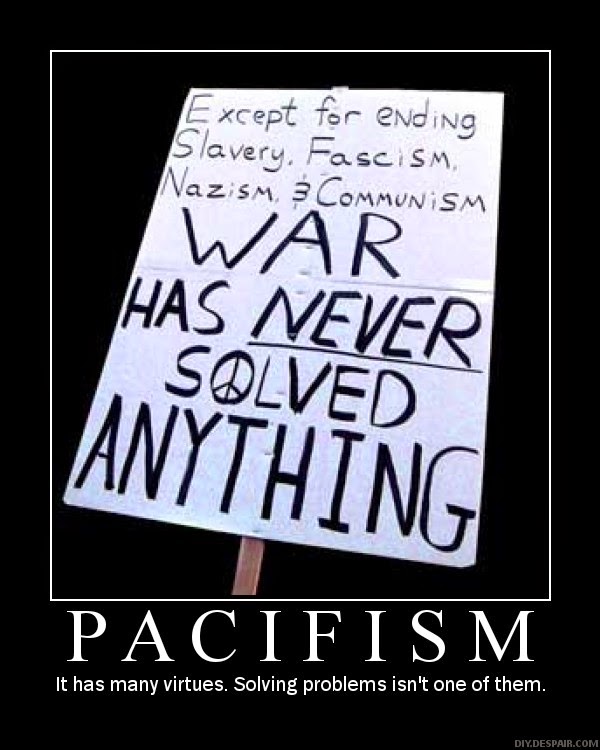 It is indeed ironic that modern pacifists, such as Jimmy Carter, Barack Obama and of course Neville Chamberlain, have been directly responsible for millions of people losing their lives owing to these pacifist's military policies (or lack thereof).

Pacifists are those politicians and their acolytes who truly believe in their heart of hearts that if we only all endeavored to just get along despite our differences, we could all live in harmony, sit arm in arm swaying peacefully to "Kumbaya."  Yes, if we all just adhered to these pacifist policies, we would all be at peace.

Yes, on paper, it would be nice to sit around the campfire singing Kumbaya with everyone who wanted to kill us, so that in the end we would all see eye to eye and agree in every way how to best manage all human affairs.

But we don't live in a paper world.  The world is ruled by the aggressive use of force.  It always has been, is currently done this way, and will always be done this way.  It's how the real world works.  But don't try and sell this concept to pacifists.  They still insist if we take the brilliant philosopher John Lennon at his word and 'give peace a chance,' things will work out just peachy.

Jimmy Carter figured he could throw the Shah of Iran under the bus in 1979, and the Shiite muslims of the world would love us.  We can all see how that turned out. The Ayatollah Khomeni took the reigns of power in Iran (a former reliable ally of the US in a very troubled region), and we all see how things turned out since then. The Shiite muslims of the world hate us with a purple passion, and have been on the rampage with their murderous intent on bringing about the 'End of Days,' with the world going up in smoke.  Millions of people have died since the mullahs have been in charge in the Middle East.  Untold millions.

Neville Chamberlain, British Prime Minister during the outbreak of WWII, of course, is the poster boy of pacifists gone wild.  This guy figured he could simply chitty chat with the worlds' most evil butcher, Adolf Hitler, and things would end up just fine.  How many millions of people lost their lives owing to Neville Chamberlain's miscalculation as to how pacifying homicidal dictators would make them peaceful players in the world community?  There are still debates as to how many millions lost their lives, as the statistics are lost in history and the fog of World War.

And how about Barack Obama, the guy who ended all of the wars that the warmongers Bush, Cheney and Wolfowicz got us into?  What is the body count now on Barry's watch?  How many people are dead in Syria, Libya, Egypt, Lebanon, Iraq, not to mention Paris and elsewhere, once Barry decided to withdraw American force from trouble spots?  Millions?  Maybe not.  Maybe.  The body count will always be disputed.

Regardless of the actual numbers of dead people owing to America's pacifism that is currently the policy of the greatest power on earth,  the numbers will speak for themselves as history becomes clear years from now: pacifists kill people.  When good people stand by and let evil flourish, this is what we get, and pacifists will never agree that this is reality.

That's why they live in fantasy land.  Reality is just too harsh to contemplate, especially when they are the ones with blood on their hands.
Posted by Fredd at 5:09 PM

I don't think that Barack looks at it that way. He did get the Nobel Peace Prize two months into his presidency for being of mixed race.

Excellent post Fredd. Evil must be smacked down with sufficient force to make that evil afraid to do any more evil for at least another 1000 years.

The Lord will come back with His own sword someday and settle the problem.

LL: Barry will never look at things the same way you and I do. He will truly think to his dying day that he saved the US from a horrible fate during its darkest days. He truly thinks we are a greater nation than ever, now that we have withdrawn from international affairs. He truly thinks that he will be regarded as America's greatest president by history.

Christopher: yes, I appreciate the sentiment. Robocop would have done a better job at putting things in perspective than I could ever do, however, something we both agree on.

Gorges: that is the same sentiment that the mullahs have: Allah will settle all of this at the End of Days. The only difference between your sentiment and the mullahs, of course, is who is on the winning edge of that mighty sword.

What he really need to do is smack down these evil cultists until there's none of them left. That oughta settle things for a millenia or two.

Barack and friends are fools and the world is full of them. They only become dangerous when they can convince other low information people to vote for them.

I remember how peaceful the Middle East (to a point that is) was before Carter's and Obama's meddling.

Odie: that festering pus hole Middle East was at least confined to the desert sands, where they threw acid in each other's faces and chopped off hands for the least offensive crimes and left us out of it.

Now they are boiling over into civilized lands, thanks to Jimmy C and Barry O.