Since when should liberal Democrats moderate GOP debates? 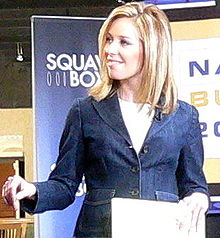 "Madam Secretary, it has been confirmed that you deliberately and callously lied to the American people about the murder of four Americans including our ambassador in Benghazi, saying it was a spontaneous riot caused by a video.  It has been verified that you knew in fact, by your own words, that it was a planned attack by an al-Queda-like group, your words, Madam Secretary.  My question to you is this: why should the American people ever believe a word you say from this point forward, and isn't it true that you have no integrity whatsoever?"

That question will never be asked of the known liar and failed politician, Hillary Clinton.  Why will it not be asked?  Because rock solid conservative moderators will not be conducting the debates at any point.

But we still put up with the likes of these arch-liberal moderators such as John Harwood and Becky Quick.  These guys have never, ever voted for a Republican, not once.  And they never, ever will.  They are true-believer liberal socialists, and their only goal was to discredit as much as possible everybody on the GOP debate stage.

They may has well have asked the following:

"Senator Cruz, since some say you eat babies for breakfast, will you and your administration continue this abhorrent menu if you are elected to the highest office in the land?"

Or better yet: "Mr. Trump, why are you so rotten?"

Or even, "Senator Rubio, it has been suggested to many that you suck real bad.  Why should we elect you to the highest office in the land when you suck so badly?"

Reinz Preibus swore that we would have none of this a few years ago.  What ever happened to that pledge?  Did he forget that these liberal Democrats always go for the throat when moderating GOP debates, but throw soft balls to their Democrats vying for the nod in their debates?

My suggestion going forward to balance things out, is for Rush Limbaugh to host the next Democrat/Socialist debate.  And ask the tough questions of them, for once.

I was waiting for Becky Quick to ask Ben Carson, "When did you stop beating your wife?"...a solid rhetorical question.

I'd like to see 2 libtard moderators and 2 Conservative moderators for each and every debate.

But they consider David Brooks, or Morning Joe a conservative.

Ed: many on the left consider Hillary Clinton center-right. She voted for the Iraq war, she is buddy-buddy with many on Wall Street. Depends on your perspective, eh Ed?

From my ultra-uber-extreme right perspective (and proudly so), where Genghis Khan would consider me a right wing nut job, I see Hillary Clinton as about as far left as anybody can go. Then there is Bernie Sanders, who is the Alf Landon of his time, and not any more valid a candidate than Al Sharpton was a few cycles ago.

Ed, yes! Brooks and Joe CONSERVATIVES? :-) ONCE in a while Joe will stick up for a Republican...but that MIka B is there rolling her eyes, disgust oozing from her pours...hard to watch, so I don't much!

Did you see what the view did to Carly Forina? Man what a bunch of ignorant whores.

No, Kid. I can't stand the ignorant whores on The View. I saw, of course, the short clips of their "demented" segment on Carly, and I understood that she was to reappear on the show, presumably to allow those stupid hags to kiss and make up.

Did Carly show back up on The View, and did the ignorant whores grovel at her feet?

Fredd, I didn't see it I read about it. No, they didn't grovel. They tried to excuse themselves by saying they do humor. Strange how they never do humor on obama, clinton, reid, pelosi, or any other piece of human garbage excrement.

Did you watch the latest Fox Business Channel debate? If so, what is your take-away on winners and losers?

LL: Just about 30 minutes of it was all I could stand. In those 30 minutes, I heard three candidates completely eliminate themselves from my consideration (not that any of them are losing any sleep over my contempt):

Jeb: "You can't deport 12 million people. That's not an adult conversation." Oh yes we can. Just start shipping them out. One at a time.

Jeb! is a dead man walking politically. Be honest, you didn't consider him viable before the debate...He needs to keep his cushy trust fund and his do-nothing job at Lehman Brothers (where Kasich worked). He can play fantasy football and golf, or whatever it is that he did these days before running for Leader of the Free World.

Kasich is more Democrat (in the 1960's mold) than Republican. The Democrats of today are the Marxists of the 1960's. He stands on the corner of the stage, ticked off that he's not in the middle. He talks about what a good governor of Ohio he is (incessantly). He should stay there before we allow him to Peter Principle himself into the presidency.

Rand is angry that he's on the opposite side of the stage from Kasich and not in the middle, and he's like a yappy little poodle (hair and all) trying to hump somebody's leg so that he'll move up in the polls. He's going to be below the line with Pataki and Huckabee by the time that the next debate rolls around.

Does that sum it up?

Jeb is in MY eyes not viable. He, among all 17 GOP candidates, ranked 17th. George Pataki would be vastly preferable to me than Jeb. That said, if Jeb is the last GOP guy standing (which is what the Old Guard GOP all want), Jeb would be vastly preferable to the Bitch of Benghazi. I have had issues with all Bushes of all ages, starting with Preston. They are all Democrats at heart. Every damn one of 'em. But middle of the road Democrats are less of an evil than a true believer leftist Democrat.

Rand and Kasich have as much chance at the GOP nod as Scott Walker does.