Why Liberals think Conservatives are Evil 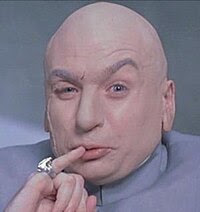 Just ask any card carrying, dues paying liberal what they think of conservatives.  The pejorative expletives and vitriolic venom that will inexorably spew from the liberal's maw in response to such an inquiry should give you a hint that they just don't like conservatives very much.

But why would this be?  It's simple, really: conservatives' views, if implemented via legislation, will significantly cramp a liberal's lifestyle.

And when a liberal's lifestyle is cramped, they consider whoever is doing the cramping to be flat out evil.  Why else would somebody purposely cramp a liberal's activities?  Nothing else explains this except the 'evil' theory.

Only evil sorts would want to inhibit this, obviously.  And conservatives fit that bill.  Just pure evil, these rotten jerks, standing in the way of true love.  Speaking of true love, hard core liberals also believe that adults should be able to have sex with children, if it is in a truly loving relationship.  NAMBLA (North American Man-Boy Love Association) is getting a bad rap owing to its opposition from conservatives, there they go again standing in the way of true love.  How evil can you get, these liberals ask.

Of course, there's also the widely known fact that conservatives are just plain mean spirited and cruel when talking about wealth redistribution.  These evil conservative jerks oppose having their money taken away from them via confiscatory taxation and given to those less fortunate.  Can you believe how evil that is?  Pure evil, the liberals say.

Just ask any average, any run of the mill liberal how evil conservatives are.  And you don't need to hunt down a dyed-in-the-wool hard core liberal who brings three bean salad to all the liberal picnics to get this line of reasoning.  Any old liberal who falls off a log truly thinks that conservatives are pure evil, the veritable spawn of Satan.

Conservatives are a bucket of cold water on their desires, a wet blanket on their wishes to be free.  Those damn, rotten evil conservatives.
Posted by Fredd at 7:45 AM

You pretty much summed it up brother.

I hope I don't shock you.

Labels are hard to use since they've been Fubar'd so much, but:

I believe the founders to be Flaming Liberals by today's definition.

I consider myself a neo-con by today's loose definition and I personally don't care what people do as long as it doesn't infringe upon the right of another. Lie, Liberty, Pursuit of Happiness. Small government, low taxes is about it for me. I believe the Federal gov should only concern itself with Natl Defense and all else to the states.

I don't care about drugs, I think they should be handled like they were pre-1920 or so. No restrictions other than need to be an adult. Handle them like alcohol and put the dealers
out of business. Get caught dealing to underage? 20 years minimum. Spread the word.

Conservative have gotten such a bad name because those with the loudest voice Do seem to want to control what people do. WAY too much of what people do. I understand people rejecting that. Our founders rejected it.

"If a liberal wants to marry a turnip, who is to stand in the way of their heart's desire?"

I think a rim shot is needed after your beet comment. But you needn't concern yourself that I will let the word 'leek' out that you are a closet commedian.

Conservatives are evil in many ways

1. They force the bible on people
-there is the seperation of chruch and state.
-Not everyone is christian.
-Religion has no right to dictacte in politics like they think they do.
2. Careless and evil coporates control the conservatives.
-they only think about their wallets and not their hearts.
-poverty is beyond their thinking.
-conservatism is the reason why hostes went out of business.
3. They will do anything to wipe out the liberals.
-liberals do the same thing, but conservatives will hire assasins to murder and shut people up if they have to.
-they constantly try to attack obama in many ways.
-conservatives buy their seats in congress instead of working for them.
4. They are discrimitory.
-in the conservative heartlands of Alabama, they wanted to challenge the voting rights act. Which gives african-americans the right to vote.
-they think they know whats fair.
-they think they are special people.
-listen to the song "My Way" by Limp Bizkit.
As said, the Conservatives are evil in many ways.