All Hail King Barack I?

Well, it's done. The foot is in the door, the tooth paste is out of the tube, and the Genie is out of the bottle. On December 19th, 2009 (mark this day on your calendars, fellow soon-to-be Proletariat's), was the day that Ben Nelson (D-Neb) reportedly accepted whatever back room agreement offered by Sen. Majority Leader Harry Reid (D-Nv) to secure his vote on the disastrous senate version of Barack Hussein Obama's coveted health care reform initiative. 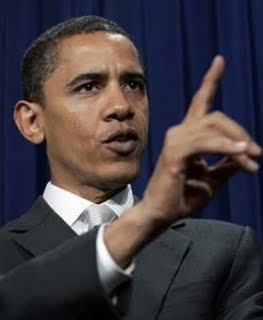 If all 58 Democrats and 2 Independent senators keep their words and actually vote in favor of shutting down debate on the Senate floor, this one is a done deal. It will pass, regardless of it's wildly unpopular standing with the American public.
Even though the hated 'public option' was taken out of the wording of the bill, and the God awful 'Medicare buy in' provision has been scuttled as well, they will be back. Those provisions will be added by hook or crook going forward, in addition to public funding of abortions, rationing, death panels, and all the rest of those unsavory ingredients: in a few years, it'll be like the old ad for Praego spaghetti sauce: 'it's in there.'
.
This wildly unpopular legislation will be touted by the Obama administration as the beginning of a new era, the first significant social program to find footing since Social Security was passed in 1935. And we all know how well Social Security is doing these days.
With the upcoming signature of Obama's into law of this health care reform debacle, we will have the foundation arguably of a primarily socialist republic. And now for the scary part: Barack Hussein Obama will want to be around to make sure that those stricken provisions (you know, the death panels, the abortion funding, and outlawing private insurance eventually, etc.) are put back into the wording so that the government will in time be able to tell us what to drive, what to eat, what to smoke/not smoke, what to drink/not drink, what to play/not play, where to live/not live, what to listen to/not listen to, what to (fill in the blank), what not to (fill in the blank). All in the name of keeping health care costs under wraps. Like they care about the cost of anything in the first place, they don't. Barack Hussein Obama and his ilk just want to be able to control our lives down to the tiniest detail.
.
With the current system in place, the 112th Congress will likely see the huge majority of Democrats shrink if not even disappear, and Barack's administration will come to an end in 2012 as all Republicans, a majority of Independents and even some Democrats will sack him, maybe even in the Democratic primary.
.
Not so fast. Since we just got rid with a single signature on a piece of paper of our current capitalistic based representative republic for a socialist base for the most part, what's to stop Barack Hussein Obama from seeking to get rid of other components of our country's heritage? Like removing the 22nd amendment regarding presidential terms of office limits via executive order, increase ACORN's funding by ten fold, and thus have the framework in place for securing fraudulent election victories from now until he tires of being president for life. Heck, why stop there, he may as well just dissolve the Supreme Court, the House of Representatives and the Senate while he's at it. Sound unconstitutional? The Constitution of the United States of America has not stopped this guy from doing what he wants to do, not even one time.
.
Once these inconvenient (and in Barack's mind, trivial) constitutional matters have been eliminiated and we are completely under his boot, he can anoint his daughter, Sasha The First, as Queen of America in 2045. Then King Barack Hussein Obama The First, or likely in the history books, King Barack I, will have realized his vision for our country.
Remember, Adolph Hitler accomplished much the same thing: he was duly and legally elected by the German voters to the Reichtag in the 1920's, solidified power of the National Socialists over the next 4 years, and was then elected Chancellor (the last Chancellor of the Wiemar Republic), dissolved the Reichtag and took over as Der Fuhrer of the Third Reich. And we all know how things turn out for him thereafter.
Yes, all of this doom and gloom speculation sounds pretty far out there. I wonder how Hitler's rhetoric sounded to the citizens of the Wiemar Republic back in the 20's. I understand that the old paper hanger was quite the gifted orator.
Sound familiar?
Posted by Fredd at 9:19 AM

Fredd, I only wish to direct to this link,it says it better than I could but I have been saying much the same amongst my friends and the blosphere.

The Constitution can't stop any one.
It will have to be used like a hammer, pounded on the head(s) of the offender(s), By Some real Patriots in Congress. Doesn't look like there is one to be found!

I'll check out that link momentarily, Comrade Christopher. Or going forward, how should we fellow Proletariats address each other, perhaps 'Brother Christopher?'

They/We: yes, we'd have to assemble a search party to find some Real Patriots in the 111th Congress, but I will speculate (an activity I am rather fond of, frankly) that no seach party will be required after 2010: that Congress should be LOUSY with patriots! The Republican Speaker of the House can arbitrarily throw a rock towards the Right side of that aisle in 2012, and he can be guaranteed to hit a real patriot.

OK, Christopher: I read that Hot Air article, and it rambles on and on about what we can do within the system to roll this back once we holster our pitch forks and get to work with Republican majorities.

It does not address the more sinister side of my speculation: that Obama will not leave the current system in place, and accordingly all of those future parliamentary manuevers are moot: ain't gonna be no House and Senate, and King Barack I will throw anyone that looks at him cross ways into the Gulag.

The date of Dec. 19th is a horrid one that will haunt America for generations. I can only pray the scenario you paint never comes to pass. The only king obummer will ever be is king of the Moonbats!
(I think Dr. Dave's son said that...funny stuff)

He can be King of the Moonbats, as long as I don't have to be one of his loyal subjects.

Jadedfellow: don't be a weirdo.

I say this again: don't be a weirdo.

Yes, that may be a lot to ask from you, but remember that I don't have to publish your weirdness. Yes, we Oregonians stick together -to a point. If you are going to continue with the goof ball comments that do not add to the discussion, forget getting air time with me.

One correction, Fredd: Nelson is from Nebraska, not Colorado. We have our own lefty nutball senators to worry about in Mark Udall and (can't remember his first name) Bennett. Bennett was appointed and it's generally agreed he's toast next year.

Thanks for the editing, Foutsc. Already amended.

And a quick Google search indicates that your 'toast' appointed senator's first name is Michael.

Don't know much more about Colorado politics, other than that's where Pat Schroeder is from, and she was the craziest, left pinko liberal weirdo that ever graced the august body.

Additionally, I think that Colorado is where your former governor Richard Lamm hangs his liberal hat. Seems he thought 'old people have a duty to die and get out of the way' for the good of the rest of society. He must have been hanging around Pat Schroeder too much.

My suggestion to all who visit Colorado is that when inside the borders of Colorado, don't drink the water. There has to be something in it that scrambles people's brains. No offense intended, Foutsc, you apparently guzzle bottled water.

The only thing I can say in regard to this post is AMEN!! But my money is on us saving the constitution and replacing the bums with Patriots in 2010 and 2012. We just need to wake up America to what's going on and prevent King Obama from taking his coveted throne. I'm sure at the very least he's trying to be an immortalized figure like FDR or Marx, (as KP and Foutsc have pointed out) but I'm pretty sure he'll go down in history as the WORST president EVER. America loves her freedom. We just have to wake her up from her politically apathetic coma.

TKC: Rather than 'King Obama,' I think the Messiah prefers 'King Barack the First'.

LOL!! Sheik Barry, Emperor Obama, Das Fuhrer Barack. Yeah... I don't like any of them. King Barack I works best but I still want to vomit.

"It does not address the more sinister side of my speculation: that Obama will not leave the current system in place, and accordingly all of those future parliamentary manuevers are moot: ain't gonna be no House and Senate,"

You betcha! They're already changing the rules of the Senate w/in this blasted bill:

They're making up rules as they go along, rules to prevent anyone from CHANGING their 'progress!'

The repercussions of this corrupt bill, if enacted, and the slimy way that the Dems went about it will shake the foundations of our country. Maybe then the Won's voters will finally realize the arrogant contempt in which they're held by their false messiah.

Susannah: I love the phrase 'you betcha!'

Looks like you've been busy, actually reading a few of my posts WITH the comments - phew. Welcome, BTW.

She's the whole reason I started my blog last fall. Check it out here when you have a few spare minutes:

Thanks for the welcome, Fredd. You & your readers are welcome to swing by any time.

There is a Hope high above any government power or public figure...Merry, Merry Christmas all!

Fredd, the only people who follow ombummer are like rats the pied piper leads off a cliff, or did he lead them into the ocean to drown? Either way, they all end up not existing anymore, kind of like I wish this sorry lot would.
PS: Glad you enjoyed the Tull video's and those talented "hungary" dogs. We must have gotten brainwaves thru the crappy chicago atmosphere.
Merry Christmas! I hope we don't get walloped with ice storms too! I'm sick of winter and it just started - kind of like the events of last jan.

This blog is great Fredd, I'm hooked on it now.

Hooked, huh? Well, as a veteran you will probably LOVE my next piece, about banning pregnancy in combant zones.

I suspect I know your position on the issue already, PS. I served 10years active duty as an enlisted guy in the army 25 years ago or so.