Afghanistan: US trying to train an army of Gomer Pyles and a police force of Barney Fifes 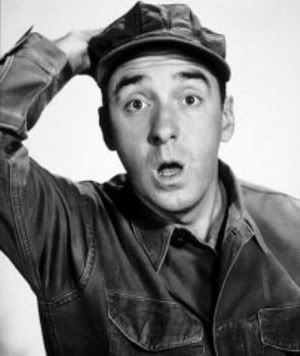 SO true!!!! Awesome post!! I think it's funny that Obama's 30,000 troop commitment is being hailed as a nod to the Right, when obviously there are a lot of us over here that want to pull the troops out of Afghanistan altogether.

TKC: Rather than send Obama's 30K troops, let's send 10 squadrons of B-52's: much cheaper, not to mention quicker.

And note: this conclusion is similar to yours in your last post, wouldn't you agree?

For sure!! In war it's all-or-nothing: everything you've got or don't bother. I just can't see how this 30,000 troops thing can be a good idea from either side of the coin. Riding the fence is only putting more lives in danger because it's not enough to get the job done, but they're going in undermanned anyway , so they're basically being sent to the slaughter. Either send in the B-52's and/or the 60,000 troops that were originally requested, or admit that it's not worth it and pull the troops out. We've got a President that is more concerned about his popularity than about the safety of the soldiers, so he rides the fence and sends in 1/2 of the needed troops, and that's just dangerous and dumb.

I firmly believe that these 30,000 troops we send are not going to get 'slaughtered,' but rather a marginal amount of them will simply get picked off at the perimeter, much like has been the case for virtually all of our casualties to date in both Afghanistan and Iraq.

We have not lost anything close to a major battle, as our superior training, equipment and tactics prevail each time we engage these barbarians: we kill or maim 15 or 20 times their numbers for each of ours that falls. That is a ratio that is acceptable to this insurgency.

Our soldiers have the education, training and leadership that allows each soldier to make independent decisions on the battlefield. The Taliban and al Qaeda fanatics must be told by a single leader each and every move they make on the battlefield. Big difference. When a Taliban leader goes down in battle, the rest of them do not know what to do, and accordingly they simply stay where they are and neither advance nor retreat until we find them and kill them, or they surrender. They don't have the skills to adapt and overcome on the battlefield.

They will never, ever win a major engagement, and have not yet. Our troops will largely survive, hold and take ever more territory, and the casualties we take will just be around the edges of our forces.

Good point. Slaughter is an overstatement, but being picked off at the perimeter isn't fun either. LOL It just seems like we should send the full 60,000 as recommended and get the job done... no nukes necessary, just give the generals what they have said they need in manpower. If that's what they say they need to win, then why not?

True, getting picked off is a bad thing, especially if you are the one getting picked off. Sending the 60K troops is still adhering to 'surgical' tactics, however. It will work, but a lot more time on the ground in addition to US blood will be involved. Not as much blood as in past wars, not nearly as much, but still more than necessary.

Just dispatch those squadrons of B-52's, give 'em some coordinates to bomb, and let 'em bomb, bomb, bomb.

Much like the ol' ditty from a few years ago to the Beach Boy tune of 'Barbara Anne,' which went 'Bomb bomb bomb, bomb bomb Iraq...' Then the harmony set in, you know the tune.

Good analogies, but they need a few tweaks. Imagine the Gomers all came from different tribes and hated each other, guaranteeing a lack of teamwork and likely blue on blue attacks.

Further, imagine the Barney Fife's were not good-hearted, but venal and corrupt.

Now we've got a complete picture. It pains me to say this, but some societies really do need an iron-fisted dictator.

Foutsc: I was wondering whether someone was going to pick up on the 'hearts of gold' monkey wrench in my analogy. Good eyes. I considered editing it, but now that I've been outed, so be it.

Yes, not only do the Afghani policemen 'Barneys' definitely NOT have anything close to hearts of gold, neither do the Gomers, truth be known. They'd just as soon throw a beaker of acid in your face as look at you, if you're not part of the tribe.

PS: not that they have ever laid eyes on a beaker. My analogy just gets further and further astray...

Hi Fredd, This is a great post. I totally agree. After 8 years, and countless American and allied lives ruined, these savages are never going to get it right. Good luck with that, indeed.

I like your idea of the 10 squads of B-52's. Clear the area of all the good people, then "bomb's away". Problem solved. PS: Great blog you have here, Thanks for following me, I'm returning the favor.
Keep up the good fight.

Bunni: ditto what you said. I appreciate your kind words as well.

Not to mention the hardship that the rules our troops must follow in Afghanistan has put upon them:
http://www.washingtontimes.com/news/2009/nov/16/us-troops-battle-taliban-afghan-rules//print/
After reading this article, the B52's sound like a good idea.
Thanks for the follow on my blog. I am happy to reciprocate.
Nice blog BTW.

A fellow conservative Illinoisan, and Chicago Bears + Chicago Cubs fan. I like you already good sir! And great post by the way.

Feel free to check out my blog anytime.

I disagree with your article in your saying that our troops should leave Afghansiatn altogether. But, I do agree in the all or nothing approach. Obama didn't even give Gen. McCrystal all the troops he requested. Leaving in 18 months is not an option if we are going to fight this war properly. Obama gave part of our playbook to the enemy by revealing when the U.S is going to start leaving Afganistan. Whether that is due to his motives or inexperience, I don't know.
I believe it is important that we finish the job in Afghanistan and Pakistan and stop the terrorists. I know its extremely tough because of the terrain, but sometimes the things that are the toughest to do in life are the things that are the most worthwhile and important to accomplish. Pakistan has at least 25 nuclear warheads and we must not let Pakistan fall into the hands of terrorists. If Afghanistan does fall into our enemies hands, and since Pakistan has not signed the Non-Proliferation Treaty, I can see the terrorists using the nukes on the U.S. or any number of places.

My dad complained for years, after coming home from the WWII; that McAurthor should have been let alone. Gone all the way In N. Korea!
The result--The U.N. gave our troupe locations to the N. Koreans.
We are fighting more than one Enemy.
He was very suspicious of things, and people (served in the middle East) did not trust-was waiting for the back stab.(Literally)

Hey, what's wrong with a bunch of Fifes as police officers?

Great post by the way, and I can't help but to add my 2 cents worth.

I'm in the process of reading Democracy In America. On page 189, chapter 8 Tocqueville said way back in 1837 something similar to the point of your post as it applies to Mexico.

"The Constitution of the U.S. is like those exquisite productions of human industry which ensure wealth and renown to their inventors, but which are profitless in any other hands. This truth is exemplified by the condition of Mexico at the present time. The Mexicans were desirous of establishing a federal system, and they took the Federal Constitution of their neighbors, the Anglo-American, as their model, and copied it with considerable accuracy. But although they had borrowed the letter of the law, they were unable to create or to introduce the spirit and the sense which give it life. They were involved in ceaseless embarrassments between the mechanism of their double government: the sovereignty of the States and that of the Union perpetually exceeded their respective privileges, and entered into collision; and to the present day Mexico is alternately the victim of anarchy and the slave of military despotism.

With this in mind, McCain may have been right in suggesting that we stay there for 100 years, and that still won't be enough. As long as our goal is defeating terrorism, and not using Afghanistan for the purposes of political capital for Obama, we might be OK. Or we could just turn it into a sea of glass.

Dan: I'm all for plan B: the sea of glass thing.

An army of Fifes, led by a cadre of the 4,000 Stooges; Ernie Bilko would be so proud.