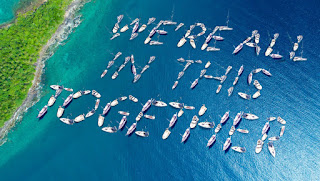 Yes, we've all heard our betters tell us this, over and over.  And they seem to believe what they are telling us.

"We are all in this together."  And in the next breath, our betters tell us to stay at home, no beach outings, no haircuts, just sit.  And in the breath after that, they instruct their chauffeur to warm up the Bentley because they have an appointment at the hair salon, just for them ((Lori Lightfoot (D), Mayor of Chicago)).

When asked why she can get her hair done, but nobody else can, she replied "I'm on national TV every day, I need to look good and I take my personal hygiene very seriously."  Next question.  In other words, I'm special and you are not.  It's OK for me, but not for thee. So shut up.

About that same time, our corpulent Illinois governor, J.B. Pritzker (D), is telling us the same thing: 'we are all in this together.  Accordingly, I am asking you to stay at home and save lives.'  Even as these words are escaping his meaty jowls, his sister is jetting off to Florida on her private plane to see relatives.  When asked about this double standard, he replied that he is insulted that this reprehensible question was even brought up, next question.  In other words, shut up.  I'm important and you are not.  It's OK for me, but not for thee.  Or words to that effect.

And what about our betters shutting down businesses left and right, telling us all to stay home and save lives.  Subsequently, all revenue for these businesses comes to a screeching halt, and all of these small businesses are suddenly insolvent, dead broke.  Our betters in government, however, are getting paid direct deposit on time and in the manner in which they have become accustomed.  "We're all in this together," as they cash their paychecks and we proletariates declare bankruptcy because these well paid government types tell us to stay at home, save lives.  We're all in this together, remember.

We voted for this?  Unfortunately, we did indeed vote for this.  I am using the Royal 'We', because I did not vote for this.  I voted for Republicans, and yet my Republican candidates did not prevail at the ballot box, at least not here in The Land of Lincoln (Illinois).  The Democrats in power now did, and they seem to truly believe that whatever they think is good for their constituents is what they will enforce with the ham-fisted power of their offices.  Just for the record, whatever Democrats think is good for all is almost never good for anybody except themselves and their cronies.

Notice in Red states that want to open up commerce sooner rather than later, things are getting better.  Also notice in Blue states with Democrat governors (Michigan, New Jersey, New York and California leading the charge), draconian state mandates of lock downs continue until, well, forever (until a vaccine is found and available for all).  In other words, years.

But above all else, just remember 'we are all in this together.'

People as a whole get the government they deserve. That makes it rather hard on the rest of us, though. I'm sort of glad that I won't be here too many more years, because I think when Trump is gone, things will go to hell in the proverbial handbasket.

It all sucks lemons, I know that.

Gorges: yup, we as a nation deserve all of this. We (as a nation) voted in most of these tyrants.

I didn't vote for any tyrant with a D after their name. I maintain the right to piss and moan about them.

LindaG: yup. Times are bad. But as always happens, this too shall pass.

Not quite as bad here in Flyover Country, and things are somewhat normal. Emperor Polis has been caught LYING about it numerous times, fudging "The Numbers" and raising the general level of hate and discontentment to new highs (no pun) here in Colorado.

Hopefully we'll be able to get rid of this jerk in the next election so we can all get down to business.

Some animals are more equal.

Doc: don't bet on getting rid of Polis, he's a Dem and Colorado is a blue state. He's probably immune from his lies and fudging. Dems like a pol who fudges and lies, they enhance his resume.

Fool: I like the Orwell quote in its entirety: "all animals are equal, but some animals are more equal than others."

We'll never get rid of the scumbags who get elected but shouldn't. There are too many dumb shits among us. Way too many, and we don't seem to be as a nation getting any smarter.

It's not as bad as some here. Kansas is mostly red though nine (out of 105) counties had enough votes to narrowly put a donkey in governor's seat. Things are opening up though not quickly enough. We need a state level electoral college.

Jim: yes, when 9 out of 105 counties call the shots, a state electoral college would fix that.

That, or just require photo ID to vote, that will also fix things.

The dead who vote in Illinois are all donkeys.

I'm not politically correct in the least, not wearing.a mask, defying somebody to do something about it.

LL: yes, all the voting malfeasance and skulduggery tilts the results at the polls towards the Democrats. The older I get, the more I am convinced that nobody is honest. My beloved, pure and the wind driven snow Republicans are doing nothing about all the crooked crap going on in the government, and I am convinced they are all on the take as well.

Look at all the evidence of the silent coup against Trump. It's clear and criminal. And yet not a single crook is in jail, or even in trouble. Like you said, they are all on their tropical island paradises, dining on crab cakes and Dom Perignon, and all on my dime. With no fear about getting caught with their hands in the cookie jar. Not just their hands, they are into that cookie jar all the way up to their elbows. Life is good if you are a politician, Dem or Republican.

A pox on them all.

Yea, we dirt people are all in this together.

Kid: yes, when our betters say 'we,' it's the Royal We. Meaning, you are in this together, not them, they are above all of this. You dirt people should know your place by now.