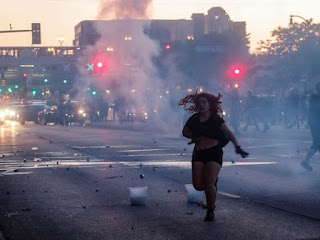 Minneapolis is on fire currently.  Another police brutality case erupts into civil unrest, and the community is suffering mob violence over the perceived injustice as a video lays out yet another bad decision by a bad cop.

No, I haven't seen everything leading up to this video of a Minneapolis police officer holding down an African American suspect, knee to his neck, all the while the suspect pleading with the officer that he can't breath.  The suspect died shortly thereafter.  It would be hard to overcome this video in a court room, but I will have to say that this is awfully hard to watch as this callous rogue cop slowly suffocates this guy as he begs for his life.  Just awful.

Look at the cost of this bad hire.  This cop, who has had lots of disciplinary action taken against him over his fairly long career, is another example of how a poor hiring decision can cost a community dearly.  This bad cop should never have been hired in the first place.  Give a thug a little authority, and everybody knows what will happen: they will abuse that authority, and brutalize the public.

Minneapolis is symptomatic of the hiring process in many larger metropolitan areas: they have budgets, the budgets are tight, and they can't offer the kinds of salaries to their police force that would attract more talented individuals.  College grads are likely not attracted to positions that start with annual salaries as low as typical rookie policemen/women.  Accordingly, communities are getting non-college trained folk, and although many of these people entering the police academies would make perfectly fine grocery baggers or landscape laborers, giving some of these unimpressive rookies a gun and discretion to make life and death decisions on the spot requires a higher caliber of personnel than a ditch digger or a gas station attendant.

We can all see on our TV screens the result of bad police decisions, as we watch Minneapolis burn.  Time to jack up the salaries and qualifications of America's law enforcement personnel.  We can't advance a polite society when we have brutal thugs wearing badges killing us willy nilly.

Time to wise up.

Ah, but that would cut into the money used to by votes!

Among my extended family are many LEO, probation officers and 911/police/fire dispatchers. Most are retired. In my world there are "Peace Officers", and there are "cops". One, a peace officer was first to arrive at the Aztec, NM school shooting. He, and a city policeman, broke a window and entered the school putting the shooter down p.d.q. They didn't do more than arrest and handcuff him even though they had children of their own attending that school. Professionals.

Another was a LAPD "cop" so rank he was fired. He was assigned to the Rampart Division back when that was a cesspool (Rodney King). One of my cherished memories was breaking his jaw and nose at a family reunion for slandering my autistic son.

To the point of your blog. I'm not sure education matters as much as attitude.

Fool: education weeds out the riff raff. Most of the time. Attitude can be taught.

Gorges: well, it might dent the corruption slush fund a bit.

The officer who was charged had 18 brutality complaints against him and was a well-known bully and thug. Why did he still have a job?

That in mind, do you remember the riots when a white woman was shot in the chest by a black Minneapolis policewoman? No?

That's because there weren't any.

LL: the fact that he had that job in the first place is a failure of the system.

Padre: I remember that. It all boils down to something beyond race here. It is the people who make the system work, have skin in the game pitted against those who don't.

Do you think any of this mob that is burning down Minneapolis has a business down there, pays taxes to support the community? That is a rhetorical question; of course they don't. They just want to smash things that they don't own. Pay back against The Man, as it were.

Well, a couple real life stories Fredd. No doubt, thousands could be added by other folks.

1) My retired Marine Colonel friend tells me that Marines who have been meticulously trained to be killers often go straight from combat to the police force without any decompression time. He tells me a simple two weeks would do the trick to bring these guys back into American society policing the populace with a proper amount of perspective.

2) Probably 15+ years ago, when I would still listen to some talk radio, a police recruiter relayed to the radio host that he recently had 10 applicants for the police force in Cincinnati. He told his boss that not a single one of them had an IQ over 70. His boss told him "Well, pick the best 7".

Kid: that is not unusual, dumb shits applying to the police academy and making the cut. Then they get a gun, an attitude and let the brutality begin.