No sympathy from me for under capitalized businesses 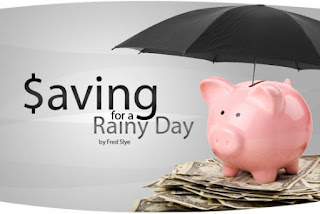 As Grampa always used to tell all of us, 'you need to save some money for a rainy day.'  Well, as usual, Grampa was right: it's raining cats and dogs right now, and those that saved that money for that rainy day are doing OK.

I am somewhat surprised, however, at just how many businesses there are out there that can't endure a bad month or two in a row without going bankrupt.  There's a ton of these under capitalized folk that have been living paycheck to paycheck for, well, decades.  Yes, our own elected government officials have screwed up the economy to hell and back by mandating shutting down commerce so that old folks don't die.

Then again, we have been ensuring that all of our old folks live in the lap of luxury since the Great Depression era and good old Uncle FDR who ensured that there was a goodly amount of our nation's wealth was transferred to old people, this has been going on for almost a century or so now.

But as for the younger generation who can't rub two nickels together during hard times, this will generate very little sympathy from me.  Going bankrupt because you can't pay your employees or rent for a month, that is just not the way that our fore bearers suggested it be done.

It seems that restaurants are the bulk of these failures, and in general terms this has always been the case.  They say that 90% of all restaurant start-ups fail for whatever reason: bad food, poor service, shoddy equipment and environs, if people don't enjoy what you are providing, you are toast.  As it should be.

Our federal government is now shoveling out helicopter money to all of these under capitalized businesses by the trillions of dollars; now I (a tax payer) am on the hook for bad business models, and I am not happy about any of this.  The employees?  Unemployment benefits are available, also at my (the taxpayer) expense, which is reasonable under the circumstances since the government is the reason that they are unemployed in the first place.

Of course, that is a topic for another day.

Moral of the story?  Always listen to Grampa.  Unless he is talking about that huge fish he caught back in the day, don't bother listening to any of that, it's all hogwash.  Other than that, Grampa knows what he's talking about.

Meanwhile, the millionaire CEO's move on to ever greener pastures.

(although they eat table carved chateau briand and caviar and sip $250 dollar bottles of Chateauneuf du Pape, while you and I eat spam and wash it down with Diet Coke).

A quibble or two. I've paid into Social Security all my working life. In most states I've worked in, premiums for unemployment insurance came out of my earnings, one way or another.

Otherwise, I agree with you.

Fool: there are exceptions here and there, but far more oldsters have or will have taken more out of the social security system than they ever put into it, far, far more. It's a Ponzi Scheme of the highest order, and it is simply funded by young working folk to ensure that the majority of oldsters can live high and dry in Boca Raton.

The only reason that the social security system has not been fixed is that oldsters vote. ALL of them. And they want this Ponzi Scheme to continue.

I think that is your point, right, Fool? You paid for your social security checks, every dime. Or a sentiment to that effect. And my point is that this has been going on since the days of FDR, or even earlier. Young people paying for old people to avoid eating out of the dumpster to get by.

And don't get me wrong, I'm an oldster myself. But I got eyes, and like The Doobies Brothers once crooned, 'I ain't blind, and I don't like what I think I see.'

Gotta say I could not care less about federal debt. Let's default on it.

Fredd, I started collecting SS at 66. No way in HELL will I ever take more out of it than I paid in.

Kid: I previously said there are exceptions here and there. And what if you live to be 388 years old? It could happen; what with you and those star people you hang out with, they will tell you how to preserve your brain in a jar of pickle juice, and you may just collect social security forever.

Fredd, Isn't that a wonderful thought. Social Security for the next 320 years. Hell I might have my bank account total rival any given politicians...

Bob: just FYI, my name is not Fredd either, it's Steve.

But the point of my post is this country is going to hell in a hand basket, when business owners can't operate for more than two weeks disruption without throwing in the towel.

I thought we Americans had more gumption than this.

Padre: of all the meat in this post, I knew you would glom onto the fish thing.

But Fredd, fish aside, are we looking at hyper inflation and if not, why not? Perhaps a gold hedge is in order?

Padre: as someone who has studied economics in my undergraduate and graduate pursuits, I would have thought that inflation would have already set in with so much printed money in circulation after many QE's, but that is not the case.

So many more Benjamins chasing the same amount of goods available, the classic definition of inflation should take effect, but it doesn't. Not yet. So much for the economists of the past and their theories. And again, the old line still applies: if you take all of the economists in the world and lay them end to end, they still would not reach a conclusion.

As long as the US continues to honor its treasury debt obligations, inflation should remain where it is.

Gold? That's yesterday's hedge. My suggestion for you? Sardines. Or Herring.

I've heard that N Korea prints up $100 dollar bills all day long faster than you can say Jack Robinson... And they can't be detected as counterfit. Inflation? Fogeddabouddeet. Stock market rallying again today. Agree - forget about gold. When you got people on TV selling the crap out of it - it is not the time to buy.

Just like GM dealers advertising the crap out of Malibu's and Equinoxes... They only advertise what ain't selling - 99.99% of the time. When's the last time you saw an ad for Corvette.

Kid: yes, gold is yesterday's hedge. I still recall maybe 10 years ago when G. Gordon Liddy was hawking gold for Rosland Capital: 'you want an investment that goes up, not down,' Gordo told us. At that time, gold was around $1850/ounce, and then tanked (I bought DUST, thanks for that one), and then Gordo was nowhere to be seen since. Still hasn't been spotted, I think he's dead.

Corvettes: I think that this car has been overrated ever since it rolled off the assembly line in 1953. It's just another Chevrolet, has no real performance value compared to true sports cars like Porsche and Mazzerati, and has lots of mechanical problems that nobody complains about much. A friend of mine once told me 'Everybody I've ever known that owned a Corvette was a dick head." Or words to that effect. I've noticed over the years that he is not far wrong.

Agree Fredd. Corvette just another Chevy. The last Corvette that I even thought looked good was 2012 I believe.

Gimme a Porche 911 or Jaguar (prior to Ford ownership). You could drive over a curb with one of those and not even feel it.

Not just the under capitalized businesses... what about all the businesses that were making Millions in Profits and still needed bailing out only a Month into this Pandemic? I find it hard to believe they NEEDED the Money allotted to the Mega Corporations, which was far more than allotted to small businesses... but like Bank Bail Outs... if money can be had on the Taxpayers Dime, well, their hands are always out and they'll give themselves big Bonuses for how well they worked The System.

Bohemian: that's what we get when legislators don't read the crap they pass into law. Like Red Nancy once said, 'we have to pass the bill to see what's in it.'

When a piece of legislation gets to be a two or three thousand page document, that leaves a lot of nuance for lawyers of big companies to wiggle into the fine print and wet their beaks.

Helicopter money helps some, but it also benefits others that need no help at all.