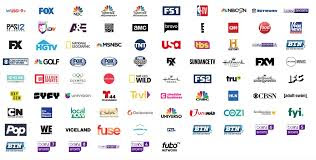 Yes, Fredd the Luddite is going to cut the cable (or satellite, as it were).  Our DirectTV invoice has now climbed to $136.47/month, and we don't have any fancy package, just the basic stuff.

We've had DirectTV for about 20 years now, and have not really had a problem with it, other than no movie channels such as HBO and Showtime, Starz, none of that.  Had we opted into those premium channels, and our monthly bill would approach two C-notes a month; way too damn much.

Our daughter is pushing for Hulu with a Netflix account, and other than the $90 or so initial investment for the Roku box, it would run around $60/month, or 43% of what we are forking out now. Very attractive pricing, not only is Fredd a Luddite, but he's also a cheapskate. The missus, however, really wants 'The Hallmark Channel,' that airs those dopey predictable Christmas movies.  Hulu does not include the Hallmark Channel.

But Sling-TV has both Pac-12 and Hallmark, but not Fox News or Fox Business Channel (both of which Luddite Fredd cannot take another breath on this earth without).

Apple TV has an enormous channel selection, but not Hallmark or Pac-12, but it has Fox News, but not Fox Business.  Then there's Disney + just hitting the streets, it looks great.

So many streaming services, all of them over half the price of our DirectTV account per month.  But none of them have everything we want.

Luddite Fredd is paralyzed with indecision.  But he's still a cheapskate.  And DirectTV is on its way out.
Posted by Fredd at 8:20 AM

I pay $42/month for Direct TV. I bought the deal through Costco. You should look into that. It's $42/mo for the first year of a two year contract and then it soars to $84/mo for the next. After that I'll return to Costco and start the whole deal over again after the two year contract ends.

Living in the country as I do, with VERY limited bandwidth, the other fancy streaming options don't work.

LL: Direct TV is owned by AT&T: Ma Bell. We hate AT&T, they've never cut us any slack, and it's over between us and them. And like the late great Sam Kineson once yelled: "I want my records back!!!"

Oh the humanity! I haven't owned a TV in five years. Yeah, WSF is a hard core Luddite.

Xfinity has a lock on the building I live in. $66 a month for my Internet.

Disney is slowly becoming a company for perverts run by perverts.

Fool: wow, you make ol' Luddite Fredd look like a techno-geek. You are a Luddite's Luddite.

I'm somewhat surprised that you know how to start a fire, much less sign onto the internet.

Gorges: I remember when ol' Walt was disappointed in Annette Funicello when she signed on to that filthy movie with Frankie Avalon: 'Beach Blanket Bingo.'

Disney has fallen quite a ways since then.

Well, we're on a bundle that costs 196 a month, most of that the TV portion. My wife watches TV, says it keeps her company when she is home alone. The only show I make a point of watching is Curse of Oak Island on the history channel. Slow moving but getting pretty interesting lately.

I would cancel the TV if it were just me.

What to do? Can you get your shows on youtube for free and just pretend they only just came out? When I lived in England in 1990, movies were delayed 6 months there and they only had 4 TV stations. I didn't stress over it I just pretended the movies just came out. And I haven't paid a dime to watch a movie for decades.

Kid: you don't watch sports, or care about sports. You don't watch TV, you must entertain yourself by whittling. You are about as big a Luddite as WSF. And that's saying something.

I get most of my news from Fox and Fox business, along with monitoring ABC (I hate those guys). And because I am not a day trader like you, I don't need any business news other than just watching the generic Fox Business, the Dow Jones, S&P500, etc.

And you pay almost $200 a month, and don't watch any of it? I don't know what to say, other than Oak Island is about as real as The Bachelor.

Fredd, Yes I gave zero interest in sports. I'll play but not watch. 80 MILLION for some dude to say he feels like a slave? Count me out and screw them all. You know why sports announcers scream everything? Because if they didn't it would be Beyond Boring.

Oak Island? Ok, no treasure found yet but you now what? Dude.... the last episode reveals a box structure consisting of timbers 100 feet or more down in a water infested environment that was made in the 1700's or earlier. By Hand. Without modern machinery. Dude, people willing to do this were motivated to hide some serious treasure. Or Something. Hell, even with modern machinery, we are not able to reveal it, the stuff made by hand with simple hand tools. That alone makes it Damn interesting, if the find something or not. Now get with the program Fredd :-)

I am no longer a day trader Fredd. I occasionally dip my wick into SPXL which is a 3X bet on the SPX, AKA: America Inc. Right now it looks overbought based on various occillaters so I'm on the sidelines, but if the RSI goes below 30, I'm a buyer.

Kid: OK, I'll give Oak Island a pass on my scorn for now. But the producers of that show have got to deliver the goods: Hitler's gold, or something. And it's gotta be big...

And whatever happened to your gold bug days? Gold has been languishing at between $1200 and $1500 for what, 10 years now? Maybe you should start looking at silver...

No, the metals are too spastic. I prefer something I can get a sense of where it is going, and as long as Trump is at the helm, the market S&P500 -should be a fairly safe bet.

Kid: that's my feel, too. Just grab some SPY and QQQQ, you'll be good to go with these oldie but goodie ETF's. I have a butt load of them, and they are golden; can't go wrong. Slam dunk. Lead pipe cinch....unless Elizabeth Warren is elected, then they will crater like Michael Avenatti's career.

Thanks Fredd, Good luck to you and us. Wow, if these people find a way to replace DJT with a democrat communist, I wouldn't touch the market with a 10 foot pole. I'd head for some CD's maybe. Zero risk.

If 'these people' win the Oval Office, CD's will have negative interest rates. Better to stuff your cash into a mattress.

It sounds as though you have an Internet connection, so you have options:

2) Amazon Prime - if you are in the service or are a vet, you can get a discount on Veteran's Day

Even at regular price/student discount, it's a good deal if you order even a few packages a year. You also get access to video, music, and books.

As long as your internet supports streaming, using it for your TV is good. Supplement with library DVDs, garage sale goodies, and an occasional purchase (I wouldn't waste the money to rent one that you know you'd like to see more than once), and you're good to go.

I'd buy one of those HD antennas to get over-the-air options - surprisingly good in many locations. Through it, we actually have access to more channels than basic cable.

Check out the antennas here - https://www.bestbuy.com/site/searchpage.jsp?_dyncharset=UTF-8&id=pcat17071&iht=y&keys=keys&ks=960&list=n&sc=Global&st=hd%20antenna&type=page&usc=All%20Categories

Linda: I just started digging into our options a few days ago, and have not even verified that our internet service can support a streaming service. I assume they can (for a price...)

Ah, Fredd. Haven't paid for the utter garbage that is network TV in 10 years, but I do use Amazon and Netflix.

Padre: not even Fox News and Fox Business? Yes, ABC/NBC/CBS/PBS are all garbage and affiliates of the Democrat Party, no question about it, and I would prefer to not pay a red cent for any of it.

BUT: the missus likes ABC, David Muir and accordingly I can also see what the other side is up to.

I went five years with no TV and lived to tell about it. When I moved to Mom & Dad's to care give they had cable TV. It was great for mom as she was bedridden, I seldom watched though, more because they asked me to watch something with them than anything else.
Now I have xfinity for TV (which I seldom watch) and internet connection. They are raising rates and the packages they offer hold no interest, so that is going away shortly.
I'm interested to hear what you end up with.

Brig: one thing is for sure - Direct TV is not going to be in the running. We hate those guys.

Went down that road almost two years ago because our cable bill had gotten up $175/month and that was WITHOUT HBO, CindyMax and all. I made a short list of must have stations and a list of nice to have. Everybody had the nice to haves, nobody had all of the must haves. One in particular, Outdoor Channel, was Optional At Extra Cost everywhere.

For us, the best all around is YouTubeTV. It has Fox News, but no Outdoor Channel in any way. Last year, we dropped YTTV and switched to the "sports centric" channel FUBO. Outdoor Channel was an extra $5/mo. Sports Centric meant channels for the Big 10 (several of them), and PAC10, nothing for the SEC or ACC, where we live. It ended up being not worth it and we're back at YTTV. It's something close to $56/month with the taxes and fees. The Internet connection that allows it all is almost the same. So we're still saving $60/month.

We've had the Roku stick for years, and have watched stuff on other services, mostly Amazon Prime and our church has a Roku channel.

Streaming seems to be the New Hotness and everybody wants in. General services like Hulu, YouTubeTV, FUBO and all may be on the way out because they're kind of the cable company of streaming. Disney+ is sucking up a lot of energy because of their content library, and the new Star Wars TV series.

SiG: we are leaning towards getting the Roku high-end box (one-time layout of $100), and then Hulu. That seems to be the way things are going. And then maybe pop for Disney+, our monthly bill maybe be around $65/month, or 40% of what we were getting gouged by Direct TV.

Also of note: you mention Pac-10 above, it has been Pac-12 for nearly 10 years now. You must be one of those old-timers, I'm surprised you didn't call it the Pac-8 (30 years ago, until ASU and Arizona came aboard).

Fredd, I think you're right -- Roku + Hulu and you should be sorted. Me? Just use 'flix and Amazon Prime, which is weirdly redundant. Anyway...

Pastor: jury is still out. This ESPN/Hulu/Disney+ package has all the fixin's (but not Hallmark!!?), and it all goes through that Roku doodad.