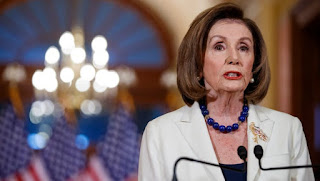 So this is now the standard for impeachment: the party out of power doesn't like the guy in the Oval Office, but controls the House: since they hate the presidents' guts, he's gotta go.  Write up the articles of impeachment here (fill in the blank, doesn't matter, we'll get some lawyers and pinko professors to argue the details).

The impeachment bar is now so low, that if a sitting president sneezes without saying 'excuse me,' he's out.  Impeach the sumbitch.

This standard, however low it is currently, was more than adequate to impeach Barry on any number of crimes/misdemeanors that Barry Obama had committed during his 8 years of regime:

* Fast-n-Furious - any 2nd year law school student could write up reasonable impeachment articles on this one, the guy's hare brained scheme on getting rid of the 2nd Amendment got people killed.

* IRS Scandal - again, that same 2nd year law student could argue this with credibility when Barry and his minions were weaponizing the IRS against their opponents.

* Pallets of cash to Iran: a no-brainer high crime and misdemeanor giving aid and comfort to our enemy.

* Tapping the phone lines of then-GOP candidate Donald Trump at his NY Trump Tower residence.  Sure, he only had about a year left in office, but still...

* Weaponizing the Justice Department assets against his opponents, as I am pretty sure that the culprits with their fingerprints all over this high crime and misdemeanor (Stryzok/Page/Comey/McCabe/Brennan/Clapper, just to name a few) would invariably rat Barry out as the master mind once the screws were put to them

And the list of high crimes/misdemeanors is long and lots of bad things that Barry had a hand in didn't make the above list, chief among them was that almost everybody in the GOP ranks hated Barry's guts.  They loathed the commie pinko.

And they SHOULD have!

Gorges: the Democrats feel the same way about The Donald as the Republicans felt about Obama. These lefties, however, have little impulse control and pulled the trigger.

Forever onward, we're going to be impeaching each others' standard bearer.

Exactly. I never understood why they didn't.

This impeachment effort will bite the Donkeys in the ass. Outside their insular circles, the unwashed masses care about jobs, i.e., the economy. Per Slick Willie, "It is the economy, stuped!"

This whole thing has become ridiculous. There's very few people who are even paying attention.

Donkeys are in their own little world. Slick Willie himself nailed the great unwashed's dominate desire, "It is the economy, stupid".

I saw Rep. Al (The Caveman) Green on the news saying that if this impeachment didn't work, they'd reload the president and do it again on some or other hoax. The concept is that the president would continually be implicated in impeachments and Congress would do nothing other than impeach.

What the Caveman and his filthy colleagues fail to recognize is that the worm will turn.

You're right. Obama could have been impeached for anyone of a number of corrupt practices - 'high crimes'. (but it would have been racist). The next time that a Democrat wins the presidency, a Republican House needs to draft articles before he/she/it is sworn in.

LindaG: Obama was not impeached because they knew Americans would make them pay, as they did after the Clinton fiasco. Dems did not learn that lesson, or if they did, they are so desperate now that they will do absolutely anything at all to grab/hold onto those gavels.

Adrienne: if we had frog marched their guy (for good reason, BTW), the GOP could count on at some point in the future the Dems would be frog marching our guy, no matter the reason.

What we didn't see was losing the house to a bunch of maniac socialists who are bat guano nuts and have pulled the trigger on this insane impeachment business.

Fool: just a technicality (a nit pick), Bubba didn't pen those words 'it's the economy,stupid', that was James Carville.

Adrienne: Yes, Obama was a crook but because he was black, he was immune from scrutiny. Just one of those things that happens as blow back from the wrongs of the past (Jim Crow, poll taxes, slavery, lynchings, the KKK, and on and on). As Rev. Wright put it so eloquently a few years ago, 'America's chickens have come home to roost.'

LL: sadly, the horse is out of the barn. The toothpaste is out of the tube. The genie is out of the bottle. And so on - much like 'the nuclear option,' as a result of this foolishness on the part of Nancy Pelosi's maniac caucus, their standard bearer in the future will have to be a saint or the next coming of Jesus to avoid impeachment scrutiny for each policy they enact that the GOP doesn't like. We have lawyers and constitutional scholars, too...

Nit pick. You are, of course, correct.

I'd say obama did things on a weekly basis that could pass for high crimes. And there are 'people' who still love the guy and would vote him back in a heartbeat. We live in the days of ignorance beyond the point we can maintain the American culture.

Kid: you are right. There's the 'Obama phone' lady in Cleveland, you remember her. Big hefty black gal, whiskey-chugging voice, lots and LOTS of people like that; takers and not makers. In the wagon, not pulling it. They loved Barry and more particularly, 'his stash' that he was giving out.

Good Lord, I don't know anything about politics but it seems like a constitution wrecking precedent's been set. Bizarre to see our polity unravel before our very eyes, and what will take its place, a dictatorship?

That aside, surely it's all play acting until our TRILLIONS of dollars in debt are called in. No one's talking about that, they're too busy quoting leftist wonks who crept into the White House. Maybe they should.

"'high crimes'. (but it would have been racist)." So, what is the standard, if a person's grandparent was black, a great-grandparent, mother's cousin's sister-in-law's best friend's second cousin's step-father? Where does one draw the line without being called RACISIIIIIIST!!!?

"Your comment has been saved and will be visible after blog owner approval."

By the way, Fredd, that sort of thing tends to cause me not to comment at your site. I had forgotten your policy when I wrote my previous comment. I shall endeavor to not make the same mistake again. I understand, your blog, your rules; if I don't like them, I should stay away; however, you make such good, well reasoned arguments in the comments on other's blogs, that I forgot that you have not yet grasped the concept of freedom/

Pastor: the 22 trillion dollar debt - as long as we can fork out the $500 Billion annually on interest, we're good. Now, how long that will be is the topic of much speculation. Some say 50 years, others say 10. The Donald says he will focus on the debt starting after his re-election. We'll see, I suppose.

Mr. Quandt: as a fellow Oregonian (I was born in Oregon City), I will overlook that freedom comment, just this one time. As for the approval process on my site, this was necessitated by a lousy troll some years back, who cursed and swore at me and was in general a major league jerk. I changed the open comment status so that when I saw his moniker on any comments I could just delete them without even reading them, very convenient for scummy trolls such as this guy.

Sorry for the inconvenience.

Rep (Caveman) Green was on the news yesterday promoting the idea of impeaching President Trump for slavery, which ended in 1865. Such is the brain trust in the hallowed halls of Congress.

I'm not sure who is dumber: Al Green or Maxine Waters, it's neck and neck. Both have been howling for impeachment since the inauguration, but have failed to mention what bribery, treason or other high crime or misdemeanor would warrant it.

I would think that if high crimes and misdemeanors are grandfathered, we should consider posthumously impeaching George Washington, as he was the first president to tolerate slaves in this country.