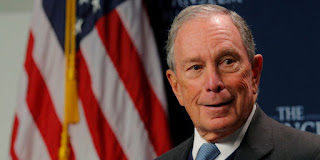 Yes, he may have bamboozled and flim-flammed in addition to having bought his way into three terms as mayor of a liberal pinko large town, but if he thinks that his bazillions of dollars will buy his way into the heartland and the presidency, he is sorely mistaken.  He thinks he's the voice of moderation among commie pinko socialists.  Yes, he's slighly more moderate than Ho-Chi Minh, leans just a tad less left than Mao Tse-Tung, and is slightly to the right of Josef Stalin.  He's as much of a moderate as Fidel Castro.

Don't get me wrong, I fully encourage him to spend as much money as he sees fit and watch it swirl down the toilet.  No amount of money can buy bad politics in Fly Over Country.  It will not affect any of The Great Unwashed.  The Dirt People out here aren't having any of it.  Just ask Jeb! how much it costs per vote to convince people that your bad policies are good for them.

Michael Bloomberg has been surrounded by yes men for who knows how long.  And those shameless butt smoochers surrounding Bloomberg all to a man agreed that he could buy his way into the Oval Office.

Sure, all of these things taken individually can be shrugged off.  Added all up, Little Michael stands no chance of even getting the Democrat tap as candidate.  The guy is just a grown-up Baby Yoda.  A toad, and Americans don't elect toads to national office.

In addition, Little Michael's policies are the stuff of certain defeat: grab all of your guns, close all the coal plants, and ban Big Gulps and Juul e-cigarettes, in addition to easing that Green New Deal in under the rug.

Not the stuff that has mobs of admirers begging to sign up for any of that garbage.

But he is certainly free to throw away great big huge gobs of cash chasing the dream.  This is The Land of the Free, Home of the Brave, he's free to blow as much serious scratch as he wants. And he has it to spare.

Yes, he's significantly left of Mousey Tongue and Stalin. But he has a plan for America and he thinks that people are stupid enough to go for it. He considers you, Fredd, one of the great unwashed, in need of a savior, and he intends to be that guy.

I find him odious in the extreme, but think that he's laying the ground work for Hillary. I find it hard to believe that Bloomy is serious.

Yes, all that money is BOUND to make SOMEBODY'S life a little better.

LL: I need Michael Bloomberg like I need the pox. The guy is bad news wrapped in $100 dollar bills. If he's shilling for Hillary, I think I hate him even more.

Gorges: the money that Bloomberg is spreading around is only going to already stinking rich media moguls, who just take that Bloomberg money and use it to stoke their fire, light their cigars and just line their gilded hallways with bags of money.

It's not like that kind of serious scratch is going towards Toys for Tots.

Let him be the (P)regressives Ross Perot.

Another self-absorbed limousine liberal elite who thinks he knows how *I* should live......NOT gonna end well.....

Fool: think he'll not get his bought and paid for nomination and run as an independent? That would be sweet; split that Democrat vote like a log.

Doc: ALL of the Democrats in the race are limousine liberals who think they know how everybody should live. Not just Little Mikey.

And I take issue with that 'NOT gonna end well...' piece: of course it will end well - for us, when they all lose and crawl back into their limousines.

The democrat educmacation system has morphed enough people into being bleep bleeper bleeping bleeper morons, it inspires this evil to believe it can rise to the top of the septic tank. Not after DJT. Nope, we know have definitive evidence that standard issue politicians are Useless and people like DJT that actually now how things work and don't need to participate in crime to load up their bank account can actually get things done.

I hope we see a real similar movement in Congress to get those useless critters replaced with Americans working for America.

Kid: the scenes in the last few days at some of these Democrat town halls look pretty ugly to me. Well, more accurately they look good to me, ugly for the liberal incumbents of these previously held seats by GOP folk.

I have in previous liberal times predicted that their evils would be turned on their heads come the next election and the wrong doers turned out of office; been wrong way too many times. My uninformed neighbors did not hold my views, and voted for the miscreant liberals yet again despite all of their malfeasance and skulduggery during the prior congressional term.

I still have those same neighbors - unreliable at best. Those neighbors (my fellow Americans, to be exact), however, DID elect The Donald, which had me gobsmacked. Maybe these dumb neighbors will gobsmack me again. They already did it once.

Then again, those damn neighbors of mine elected and re-elected a communist as president not all that long ago.