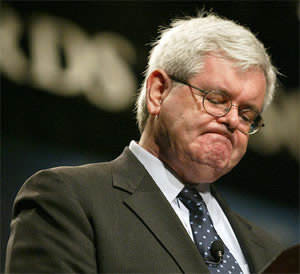 If we've heard it once, we've heard it a million times: Newt Gingrich is one smart honcho.  Smartest guy in the room.  Brilliant, a genius.  The guy's brain is huge.  Yeah, yeah.  We've heard all of that.  Lots of times.

And he's got the resume to prove it, too.  He's got a PhD in modern European history from Tulane, and good ol' Newt can really mop the floor with anyone in a political debate.  He's quick, and can really turn a phrase to get the crowd on it's feet.  Yup, ol' Newt's one sharp fella.

How smart does one have to be to know that cheating on your spouse (not once, not twice but many, MANY times) will ultimately stain your integrity?  Most dunces know this, but apparently Newt is clueless as to how this works in the fullness of time.  And how intelligent do you have to be to know that there are some things better left unsaid?  Most of us seem to get this, but not Newt, oh no.

It seems that no thought swirling around Newt Gingrich's huge brain goes unsaid.  An idea a minute, and some are great, some not so great.  How about his latest great idea; let's start a colony on the moon.  Sounds good.  Well, maybe not.

Almost ALL of Newt's peers back in the heady days of the Republican Revolution in 1994 agree that Newt was a terrible leader.  As Speaker of the House, he would call meetings nearly every day, and have a new agenda for each meeting.  No follow up on anything discussed in the past, but always something new and fresh at the meetings.  Nobody could keep track of all of Newt's initiatives, and his freshly won majority soon descended into chaos.

Socially, Newt Gingrich is at best a retard.  He's the guy who, after not seeing a female colleague for a few years and notices that the woman has put on a few pounds, will point this out to her right away.  And I think we all know how much we love to hear from people we know tell us all about our weight gain.  We just love that, don't we?

Newt thinks so, apparently.  The guy can't maintain relationships.  Not with his spouses, nor with members of Congress, and particularly with those in leadership positions.  Dr. Tom Coburn, who was swept into office during the Republican Revolution, was part of that freshman class and recalls Newt's modus operandi back then.  And he in no way supports Newt's presidential aspirations.

When asked why, Dr. Coburn tacitly defers from getting into detail about Newt, but simply reading between the lines suggests that Newt Gingrich as a leader has much to be desired, and seemingly stepped on so many toes, that not a single congressional toe went unstepped on.  Accordingly, not one - NOT ONE - former or current member of congress who served under Newt when he was Speaker of the House is willing to come out in support of Newt today.

He may be the smartest guy in the room, but I would posit that he is arguably the dumbest politician to come down the pike in some time when it comes to maintaining personal relationships with anyone outside his family (not including people to whom he was married).

Newt may be book smart, but the guy's a social retard.
Posted by Fredd at 7:12 AM

Newt's the guy you want in the engine room cooking up ideas, not at the helm.

You can be the smartest person in the world and still lack common sense and integrity and social graces.

He has his good points and bad points, no one is perfect, but should have tried to use a bit of common sense.

Much like Scotty, on the Enterprise, 'I don't know how much more power I kin give ya, Captain. I'm givn' her all she's got...'

To your point, Bobby Fischer (the chess guy) was brilliant, absolutely brilliant.

And yet he was a complete jerk when it came to social situations. Much like Newt.

I'm not so sure about that. Rush pointed out that Mitt's 9 out of 25in election wins.

But so was Dick Nixon, or there abouts.

Like Yogi Berra wisely opined, 'it ain't over, 'till it's over.' Now Yogi, that was one smart fella....

Fredd. Nothing personal, but I am quite sure about it. Romney, the Liberal )or moderate, take your pick) Wall Street 1%'er, backed by Goldman Sacs (just the facts, all else aside..) can not win.

I triple guarantee you.

Yogi is one of my mental heroes. It's why every time I come to a fork in the road, I stop and pick it up.

I dred the idea that Nov 4 or so, I have to post one hell of an I Told You So post pointing out that moderate republicans do not win big elections. It's proven by history. Nothing personal.

Hey, maybe Santorum will rise up. He does have the element of surprise in that few people know anything about him and he has very little political history.

He was a moderate Republican. Got elected twice. TWICE, Kid. Count 'em.

Newt had the same problems as a young History professor. His
'smarts' consist in selling himself to those who don't recognize what an egomaniac looks like.

To name a couple. For your consideration only :)

btw- Neutral on Gold now. All cash, no longs, no shorts, but looking to get long again more than short.

The dollar and the Euro are in a race to the bottom and all you gotta do is figure which one is going to get rocked, slammed, and toppled, over the next week or so.
Which, granted, ain't easy.

Romney is not 'unelectable.' He's our 45th president.

Side note: I recall Obama as being labled as 'unelectable.' By quite a few reliable pundits.

Now look at who's sitting in the Oval Office: 'Unelectable' Barack Hussein Obama.

Kid, you're 100% wrong on this one. And you know you are hoping I am right about you being wrong...

I'm not so sure Newtie is all that smart. But even if he is he still hasn't acquired the wisdom needed to be a effective leader.

Newtie is at best, a clown in a very bad circus.

oh fredd....you must know better than to use the word retarded.

If you re-read the post, I never used the word 'retarded.'

I prefer the word as best used by the Mayor of Chicago, Rahm Emanuel, when searching for a perjorative term: 'retard' (pronouned REE' - tard), and is the one I grew up using before politically correctness was foisted on conservatives.

There is nothing wrong with the word retard, or retarded. I use it and I mean exactly what it means.

Fredd, We've both made our case.

So, Anybody but obama.

Generally speaking, far too many 'conservatives' STILL let the media pick their candidate. Therefore we will not have a good candidate until we can break the habit as a very large group. Personally, I don't see it happening. So, we'll be left with the illusion that something worthwhile is being gone when the RINO's takeover.

Looks like it's going to be President Romney. Oh well, that's always the way it is for me. I never wanted Dubya, either (I was a Phil Gramm or Steve Forbes guy), but still pulled the handle for Dubya. Twice. And he spent money like a drunken sailor, but in retrospect Dubya looked like a grinchy old miser compared to the spending that the Obama regime has done.

Gold: still got my double shorts, will hold them until approx. Jan 2014, a year into the Romney administration. Gold should be at market price by then: $800/0z.

Yes, Newt ran into social problems as an assoc. professor of history: he was denied tenure, and left in a huff to run for congress.

Anyone with any semblance of 'social intelligence' knows that there's a pecking order in any human group. A little butt smooching and deference to the leaders of the group is required to get a leg up.

Newt has never learned this...to this very day. He has never had to smooch a butt, and will never stoop to butt smooching. Hence, the big wigs at the college he taught at denied him tenure because he didn't toe the line, and show at least a semblance of deference to the powers that be (or were).

Newt's big brain has gotten in his way more often than not.

Lets no come down so strongly on Newt. We all seem to have such shot memories when we eat our own. It's funny how the left-wing media considers Gingrich's connection to Fannie Mae and Freddie Mac newsworthy; however, it conveniently forgets to mention that every major Democrat from Obama on down have connections to this failed mortgage firm.

The bias in the media is best exemplified in what they selectively forget to cover rather than what they do cover.
Ok, Gingrich is finished. So you can let up on him now.

I wish Coburn would run for president, by the way.

Bill Bennett's a friend of Newt's...he was on FOX a few weeks ago saying something like "Newt has always thought he's the smartest guy in the room and he needs for everyone else to think so, too."

Watch Newt when he answers question in a debate; his eyes are flying over the crowd...looking to see if everybody's listening, everybody's agreeing with him. Kind of scary.

A guy with many ideas and no focus; we can't have that in the office of the President.


Re Mitt's electability; he's been polling neck and neck with Obama across the country, except in polls on CNN, where he's down about 10 points....I don't see how one can think he hasn't a chance.

Newt's a big boy now. He can take the beating that conservatives are dishing out.

That's what you get when you sit on that couch and get all lovey dovey with Red Nancy.

Coburn would indeed be a great president. Unelectable, but great.

I think President Romney's going to be a welcome breath of fresh air, after the stink of Obama has receded...

I sure hope so, Fredd...I sure do.
I just don't think any Republican can be voted in after what I"m hearing about Obama's money, targeted fundraising, media cover-up...and media hate for Republicans...

Heck, either conservative CLint Eastwood's gone totally senile or even HE supported Obama's ideas in that Super Bowl ad and he doesn't even realize it!