Top Ten Best 'Bad Guys' on the Big Screen ever

Back in the good ol' days of cinema, you could always tell the good guys from the bad guys: the good guys wore white hats, and rode white horses, while the bad guys wore black hats and rode black horses. You could spot winners and losers simply with your peripheral vision, easy as falling off a log. Not anymore. Bad guys can wear whatever they want, and ride whatever they want. It's tough, but the discerning movie goer can still pick out the villain without even breathing hard. Some actors pull off villany better than others, and here is the definitive list of 'best' of the bad:

10. Steve Buschemi: Easily recognizable as the slimy, shifty ne-er-do-well in many films today, and is a favorite scuzz ball to Joel and Ethan Cohen. His slimiest role ever had to be his portrayal of dirtbag Carl Showalter in 'Fargo', and eventually he gets his as a co-consipirator feeds him into a wood chipper.

9. Peter Boyle. This excellent bad guy may surprise most of you by making this list, since his hit TV show "Everybody Loves Raymond" had him playing the loveable slob father in law that we all enjoyed so much. However, Peter Boyle gave one of the most impressive portrayals of evil as 'Sheppard,' the general manager of a space station on a moon of Jupiter, Io in the 1981 movie 'Outland.' Sean Connery eventually does him in, but Peter Boyle gets in his licks, and is completely hatable in this excellent flick. 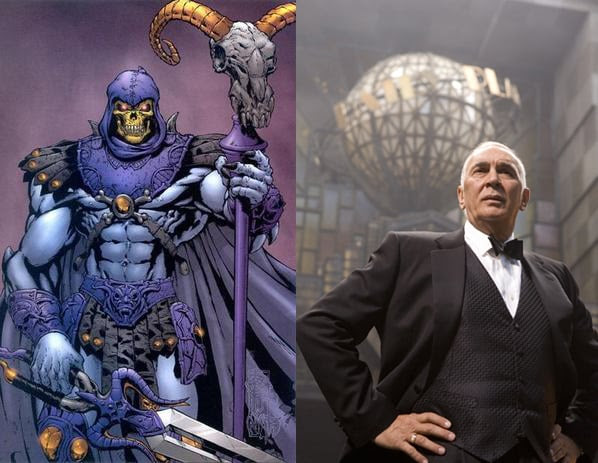 8. Frank Langella. This most excellent bad guy came to my attention as the evil 'Skeletor' in the 1987 sci fi flick 'Masters of the Universe.' Langella was also most evilly excellent as the manipulative chief of staff Robert Alexander to imposter U.S. president 'Dave,' a 1993 feel good movie also starring Sigourney Weaver as the fist lady. Frank Langella's scheming Bob Alexander in 'Dave,' of course gets screwed in the end, and that's the way we like our villains to end up: screwed.
7. Ronny Cox. No credible 'Top Ten' list can ever be complete without a men

tion of the 1987 'Robocop' flick and its great cast of characters, both good (Peter Weller, Nancy Allen) and bad (Ronny Cox). Cox plays VP Dick Jones, who on the surface is a respected businessman working for a law enforcement vendor to the City of Detroit, but underneath it all he is a slimy, filthy pus bag who mingles with the local underworld criminals as easily as Jay Leno works a cocktail party. In the end, Robocop guns down the evil Dick Jones, who falls through the window of a skyscraper to his death, assuming the hail of Robocop bullets didn't kill him first. Either way, a satisfying end to a truly hateable bad guy.

6. Bruce Dern. Bruce can sneer into the camera better than virtually any other Hollywood heavy. When Bruce gets his three-day stubble going, musses his hair up some, and cranks out that nasty sneer of his, let the hissing and booing begin...a truly detestable bad guy, Bruce Dern. Best bad guy role: Joe Danby, one of the ne-er-do-well Danby clan in James Garner's great flick, 'Support Your Local Sheriff.'

5. Arnold Schwartzenegger. Even though he comes off as a good cyborg in the latter two 'Terminator' movies, he pulls off one most excellent heavy as the first 'Terminator' out of the future to snuff out Sara Connor, mother of the leader of the human resistance in the future. Best line: 'I'll be back....' And of course, Arnie gets his in the end, but it sure did take lots of effort to put him down. This role may have not been the 'best' bad guy ever, but he certainly was the toughest bad guy ever. Hands down. 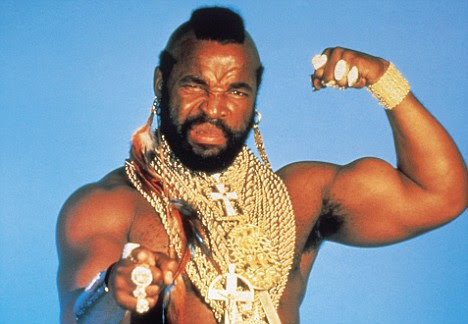 4. Mr. T. Although his most memorable line is mistakenly quoted from his series 'The A Team,' ('I pity the foo'), this phrase was first uttered by Mr. T at the age of 29 during his role as Rocky's nemesis Clubber Lang in 1983's 'Rocky III.' Rude, menacing and obnoxious, Clubber is truly hatable. Just what we all want in a bad guy. Best line: 'I don't want no has-been messin' in my corner.' (this to former champ Apollo Creed, Rocky's trainer at the time).

3. Anthony Hopkins. In his role as the cannibal Hannibal Lecter, Hopkins truly captures the spirit of evil in the sequel to "Silence of the Lambs" when he removes the top of a victim's cranium, slices a piece of brain out, grills it and serves it hot to the still living victim. Ugh. 2. Gene Hackman. Hackman is another one of those actors who gets great good guy parts, but has the breadth of talent to really belt out a nasty bad guy performance. His role as the bully sheriff of old western town of Big Whiskey is one for the ages. Hackman truly shines as rotten 'Little Bill' in Clint Eastwood's Oscar winning film 'Unforgiven.' Best exchange: Hackman to Clint: 'you just shot an unarmed man!' Clint: 'well, he shoulda armed himself.' Classic. 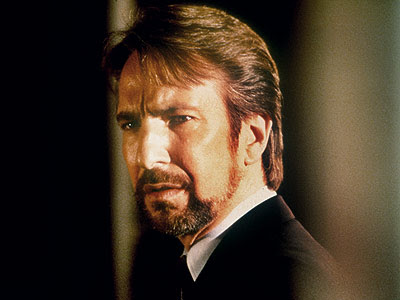 1. Alan Rickman. Completely unlike Gene Hackman, Alan Rickman is a bad guy's bad guy. He has NEVER played a good guy in his entire film career for good reason: he's evil personified. It's hard to choose which was his best bad guy role, whether it is Alan Gruber as the terrorist in Bruce Willis' 1988 flick 'Die Hard,' as the Sheriff of Nottingham in Kevin Costner's 1991 film 'Robin Hood: Prince of Thieves,' or (one of my favorites) as Elliot Marsdon in Tom Selleck's 1991 classic 'Quigley Down Under.' Lately he has been up to his evil ways as Severus Snipe in the Harry Potter films. An all around evil guy, Alan Rickman rules as the heaviest of heavies.
Posted by Fredd at 6:16 AM

Fredd. "I'll be Back", but I wanted to put in my quick vote for Bruce Dern as the worst of the worst within your top ten list.

In the movie "The Cowboys", Bruce is actually the one and only character that Kills John Wayne in a movie. I watched a show with him talking about it and he described that scene. He said John Wayne actually broke his collarbone when he rammed Bruce into that tree in the movie. Wayne was that pissed about having to have to take a fall in a movie.

But I'm thinking there were some bad guys that deserve mention that are missing and I plan to get back to this subject..

No Al Pacino as in 'Scarface', 'The Godfather' series or even 'The Devils Advocate'?

Glad we agree on Bruce. I'll look for your erroneous additions to my comprehensive bad guy list with bated breath....

Al's too good lookin' to pull off a truly hateable heavy. The women still love him, and to make the list, EVERYBODY's gotta hate him....

What, no comment on my listing of Ronny Cox for his evil role in 'The Movie Whose Name We Shant Mention?'

Fredd, Since you inquire as to my opinion on that particular movie I find myself at liberty to now discuss it albeit not at length.

There is a simple reason I did not opine on Mr. Cox being I only viewed the film once which was too much, again in my opinion, and that was now, what, a couple of decades ago. So all I remember of the film was it's ridiculous plot.

I did not even know the name of the actor who played '____cop' until I did that shout-out post to you awhile back.

Let's not forget Bruce shoot John Wayne in the back.

Hey Fredd, didn't Ronnie Cox also play some sleazeball in "Total Recall"? I seem to remember him threatening someone with the line, "Now do as you're told. Or I'll erase your ass."

Or something to that effect. And even his doctor character in TV's St. Elsewhere was detestable.

Yes, Ronny Cox played a pus bag in Total Recall, and like all pus bugs in the movies, he get his in the end on the icy cold surface of Mars.

But Ronny Cox plays a great asshole, though, you gotta hand it to him.

Yes, Bruce Dern shot John Wayne in the back in 'The Cowboys,' as Kid noted above. But we expect nothing less of hated dirt bags like Dern loves to portray.

Ok Fredd, with much fanfare and trumpet playing here are my additions to your list:

And let's not forget barak obama, the imbecile bad boy, currently playing the President of the United States.

Kid: oooooh; Lee Van Cleef, an excellent bad guy as 'Angel Eyes' in Eastwoods's flick 'The Good, The Bad, and the Ugly.'

Also played a pseudo-good guy in one of my favorite weirdo films, 'Escape from New York,' Lee Van Cleef probably should have made the list.

The rest of your list, not so much. Maybe De Niro as Al Capone in the 'Untouchables'.

;-) Ok my friend. Opinions not only make the world go round, they provide the beautiful colors.

I'm gonna have to throw in my favorite bad guy. Jack Palance in Shane has always been one of the baddest bad guys in my book. I was young when I watched for the first time though, and had nightmares.

I was thinking about the Cowboys movie. I didn't know that was the only time he died in a movie. Wasn't there a war movie where he bought it?

My only arguement to this list is that I would elevate Anthony Hopkins to the top of the list. His portrayals are not just of a bad guy, they are of an essence of vil guy.

I considered Jack Palance in his 'Shane' role. A true scum sucking evil guy. But the movie is just so old, it is on the border of consideration.

I also briefly considered James Cagney, but promptly dismissed him because of the ancient technical disadvantages that also disqualified Jack Palance.

Dan, No sir. This was the only movie in which he was killed without his permission :)

He was killed in his last movie - The Shootist - but he died of his own wishes, bringing a showdown upon himself that he was unlikely to survive rather than die of cancer.

Pure evil, Hannibal Lechter. Yup. Lots of it going around on the big screen. How about Kathy Bates' performance in 'Misery'? Pretty darn evil stuff there. Oh, that's right: the list is Best Bad GUYS...Bates is out, too.

Any list which doesn't include Dennis Hopper's, Frank Booth, in "Blue Velvet" is suspect.

Of course I would expect an extreme right winger to list only American films.

I must admit I never saw Blue Velvet. Dennis Hopper was a pretty decent bad guy in Kevin Costner's much panned 'Waterworld': I, of course, loved it. Just like Robocop, now recently billed as one of the most terrible flicks ever.

Just goes to show you, no accounting for taste.

Sorry, but it seems you're not quite familiar with Alan Rickman's filmography. He's played many good guys and with succes. He's liked for his acting skill, charm and so on, not only for his performances as bad guy.

Alan Rickman has played many good guys, and very well!

And by the way, Snape is not a bad guy! Don't want to put any spoilers in for anyone who hasn't seen the last movie or read the books, but take my word for it, Snape in not a bad guy!!!

Alan Rickman is a superb actor IN EVERY ROLE, GOOD OR BAD.