Newt Gingrich: no chance for the GOP nod 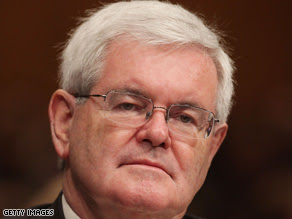 Don't get me wrong, I really loved the job Newt Gingrich did back in the good ol' days, navigating the Republican way to a majority in the House for the first time in 40 years way back in 1994.
Those were glorious days indeed. We had the gavel in GOP hands, and got down to work: we of course agreed to vote on all of the bills within the Contract with America in the first 100 days. We got that done (not all of them passed, and sadly term limits was among those that went down to defeat), but Newt and the boys were off and running.
Then things started to go awry for the former fiery back bencher and now Speaker of The House of Representatives, and just like the 111th Congress that followed in Newt's footsteps (only under the leadership of the hated Nancy Pelosi), he over-reached and soon got clobbered on too many issues (like the 'wither on the vine' thing, and wanting school children to starve, and the 'Gingrich who Stole Christmas'), and he resigned as Speaker in disgrace only four years later. I would like to add that none of those issues had any validity, but it didn't matter. Newt Gingrich was politically radioactive.
During that time, Newt packed the baggage into his resume, walking out on his cancer stricken first wife, dumping her overboard for a newer model (Marianne), then when Marianne gets diagnosed with multiple sclerosis, unceremoniously dumps Mrs. Gingrich #2 and hooks up with some new arm candy twenty-something years his junior, an office staffer (Callista Blizek) with whom he was having an affair, and who subsequently became Mrs. Gingrich #3. Then he made a second career out of becoming a lightening rod character in politics for the next decade or so.
And now he wants to run for president?
.
Can anyone seriously believe that Newt Gingrich has a snowball's chance in hell to get the nomination? With his baggage? Newt is arguably the smartest guy in the room, and that pertains to any room he walks into. He has a great idea every two or three days, and writes a book to promote those great ideas perhaps every six months or so, like clockwork. Although I am primarily an economic conservative, Newt's social life is just a bit much for even me, and I am not even close to being considered by anyone as 'St. Fredd The Pious. '
.
Newt Gingrich has become a political train wreck. And if you think none of this tawdry, salacious stuff will get brought up in the ensuing campaign of 2012 by St. Barack The Pious' campaign, I have some Mississippi delta property I would like you to consider. Prime riverfront property, mind you....well, today at least. Tomorrow it may be in the middle of the river, but that's why it's selling at a bargain price today. For you only.
But as a viable GOP candidate, Newt's got no chance. Not with the Tea Party zeitgeist, anyway. Recall, it was both Newt and former GOP Chairman Michael Steele who threw their support behind Dede Scozzafava ('R'-NY) in that New York house race for District 23, rather than the true conservative in the primary, Doug Hoffman. Turns out, Dede was a dues paying, card carrying RINO, who always brought the three bean salad to the summer RINO picnics (and more than a few Democrat picnics), and who eventually threw her support behind the eventual contest winner, Democrat Bill Owens. Everybody knew Dede Scozzafava was a raging liberal, even Newt, but none of the Old Guard GOP aparatchiks cared a whit. Doesn't anyone remember that but me?
The Tea Party will remember that, and you can take that to the bank. Newt Gingrich is a staunch defender of the GOP 'Old Guard' who is at odds with the American People as is expressed within the Tea Party sentiment of no more business as usual.
When Newt threw his support to Dede the RINO, he effectively ended any political chances at the Oval Office that he ever had. And even those former odds were slim. Now they are none, since Slim has been sighted working the one-arm bandits in Laughlin, Nevada.
Newt's got no chance for the GOP nod. ZIP, zero, nada.
Posted by Fredd at 8:33 AM

I hope you're right Fredd. Because I agree and remember everything you brought up here, Plus, Newt is an old grey haired cracker ass. He is no more electable than Any of the usual suspects. (notice the democrat is pushing romney already?)

We will need someone smart, personable and younger that isn't Sarah Palin.

On the subject of women, I'd vote for Michelle Bachman, but I just don't think the country is ready for a woman at this particular time. Anyone who isn't totally in the tank for the Dems/obama is going to need someone they feel is experienced enough to get this country back on track. Maybe a Rand Paul, but certainly not a Ron Paul.

I think this country is going to really be hurting (ala jimmah carter * 8) by the time 2012 rolls around.

It's early to pick a nominee, but I'd bet on Palin to emerge from the wreckage. As much as that pains you.

IMO, the front-runners in the GOP are RINOs; this is our fault because through our silence we coaxed them along. I certainly agree that Gingrich has no chance at the Oval Office … even if he is intellectually one of the brightest. The rest of the GOP field is completely underwhelming. Since Christie indicates he isn’t ready for the White House, plan on Romney getting the GOP nod and the reelection of Barack Obama.

Hey, that counts lots with those Independents (also known as morons). And women. I will refrain from putting a label to the latter group, who value follicles in a presidential candidate.

That, plus the country is going to be in such sad shape by then, that anybody on the ballot not named Barack Obama will win by a landslide.

I tend to agree with you that Gingrich’s main value is that of emeritus statesman.

Still, I do not think that our search for perfection will render us the ideal presidential candidate —at least, not from among homo-erectus.

I will vote for any homo erectus that comes down the pike, as long as they have an (R) behind their name, and they propose to lead us in the exact opposite direction as Barack Obama.

And that even includes Newtie, if lightening should strike all the other 12 viable candidates dead and leave him the lone flawed guy standing (homo erecti stood, right?)