Dumbest Commander in Chief Ever 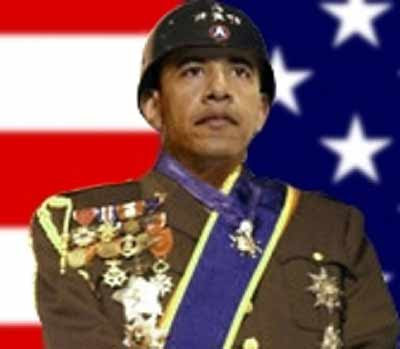 Who is the dumbest Commander in Chief of the United States Armed Forces ever? If you said Jimmy Carter, you would be close. Carter's clumsy efforts at looking like he knew what he was doing during the Iran hostage crisis ranks him right up there (or down there, depending on your point of view). Carter was God awful as a military leader. Just pathetic.
But he is not the worst. Now that Barack Obama has had to make some tough calls militarily, he has botched every single one of them. He has to be considered the dumbest CIC ever. He vowed to close Guantanamo Bay in Cuba, blustering on the campaign trail that this torture chamber was giving a black eye to the U.S. and was a recruiting tool for al Qaeda. Turns out, Obama had to eat every one of these stupid remarks. Gitmo will remain open for the foreseeable future. Duh. Where else are you going to detain unlawful combatants, picked up on the battlefield, with no uniforms, shooting at Americans while hiding behind women and children? If justice were served, each and every one of them would be lined up against a wall and shot at dawn, but that's a topic for a different time and place. For now, Gitmo is perfectly suited for detaining these animals. And it only took Obama three years to figure that one out, and you just can't get any dumber than this guy.
We're talking about the dumbest CIC ever. Barack Obama was told by his generals that an additional 80,000 boots on the ground were needed in Afghanistan or the U.S. would start to suffer casualties from lack of ground strength (and for dumb ol' Barry, that means 40,000 troops wearing a pair of boots each, as I am sure math was never his forte at Harvard). It took him months and months to do something, and he came up with a measly 25,000 troops. After 4 months of dithering.
And now Libya. This situation is simply delicious for all of those 'I told you so' types (like me) that foresaw this very situation. When Barack was faced with a military crisis, we all knew he would fold like a cheap deck chair: look at his performance to date with all of the turmoil in the Middle East. I would give him an F. He has not had one single action that anybody would call decisive, much less effective. He has voted 'present' on all of his calls as Commander in Chief. That may have worked in his South side Chicago district, but we can all see that this tactic of punting on hard decisions does not work at all in the Oval Office.
And Libya is great to point this out. It has virtually no impact on American security, and its oil production is a puny 2% of the world's total supply, and watching these tribal savages kill each other is irrelevant to American security. Let them destroy each other, it is no skin off of any U.S. nose. But watching Obama flounder around like a child playing 'army:' priceless.
He has set the bar very, VERY low for future Commander in Chief's, and I just can't see America voting in anyone with credentials approaching Obama's in the future. We see what we get when we elect a coward who votes 'present' when tough choices are called for.
The dumbest CIC ever. Barack Hussein Obama.
Posted by Fredd at 1:09 PM

Exactly Fredd. On Libya, he has take every possible position known to man, beast or obama. This means he has taken No position.

he is incompetent. Every time a crisis comes up, he goes on vacation, Libya no exception.

Imagine during the gulf oil crisis, he goes on vacation, then comes back and says 'he's going to find someone's ass to kick'. Can you Effing imagine if Bush did that?

he is extremely dangerous as can be seen in the ME, Israel and hamas, Russia, China, S America, etc. people like hugo chavez use him as a tool then laugh at him beside.
he is a laughing stock. If the American military weren't so competent and flush with weapons, we would have been overrun by jackals from 3rd world countries by now.

Arrogance only exceed by incompetence. They go hand in hand. For a reason. If you're Potus and incompetent, you have to be arrogant to try to draw attention away.

Now, he isn't going to say anything on Libya until after the weekend, at least. he is waiting and hoping to get some clue how this is going to turn out so he can take That position.

That anyone can stand behind this imbecile just shows the pathetic state of [lack of] intelligence in this country after 30 years of liberal education.

Unreal. This is another dimension of sight and sound. And his administration are even worse !
janet says today that our borders have never been more secure, and is pulling the Guard off the border in Az last I heard. Holy...

Thank God for our military.

Where are the screams of "Chicken Hawk" now?

America is getting what it wanted, a 'community organizer'. So is the world for that matter, a world who has seen faster than Americans on exactly what to reject and that includes whats left of our allies.

And now NATO will "take charge" led by the Canadians whose government has been taken down in a vote of no-confidence?

This does not take America out of it, our men and women in uniform will still be there under FOREIGN command!

And thats another thing no one is talking about, when asshole first spoke on this action (after the fact) he, and I paraphrase, said;

I have never heard a sitting POTUS let alone an ex-POTUS refer to our brave troops in that fashion, that is leaving out the word UNIFORM!

Kid: calling BO incompetent is an insult to all of the incompetents of the world. He is more than incompetent: he is pathetic. 2012 can't get here soon enough.

Now we all see what kind of credentials are involved when someone puts on their resume 'community organizer.' Being a community organizer takes less skill than a professional 'nose picker:' neither prepares one for hard descions.

Analogy time: Barack was bomb throwing at banks and city councils and (fill in the name of 'the man' whom BO hated here)during his stint as a community organizer in Chicago. What kind of results did he get? Nobody can relate any results of his tenure as community organizer. Not a single achievement.

Much like the loud drunk at the Cubs game: cursing the manager, howling for a pitcher to be pulled, screaming for the suicide bunt, screeching for the manager to pull his head out of his butt, then sucking down another 4 jumbo beers. All of a sudden, the drunk gets his way: imagine the Cubbie skipper getting yanked, and the drunk were placed in the dugout and asked to get some results for the Cubbies: we could expect the same results from that drunk as Cubs manager as we can from BO as Commander in Chief.

Suppose what looks like incompetence is not that at all? What if Obama intentionally appears incompetent so that people can shake their heads and mutter to themselves, “The man is out of his depth …” when in fact, Barack Obama knows exactly what he is doing? He is following a script written for him by Mr. Moneybags, George Soros. Now we have commented back and forth over the past two years about how Obama could not have done a better job of dismantling the US economy. This is Obama’s plan; it is exactly what Soros wants and openly advocates. But this isn’t possible without also causing disruption to other of the world’s economies, including those involved with the flow of oil out of the Middle East. Imagine, if you can, that there is a sudden and quite unexpected disruption to the flow of Middle Eastern oil. Who stands ready to supply this oil, at inflated prices? Why, Hugo Chavez, of course —a good friend of Barack Obama and George Soros. Who benefitted most when Barack Obama shut down offshore drilling in the Gulf of Mexico? Hugo Chavez, of course, who received all those oil-drilling platforms no longer needed in the USA. And who loaned Chavez the money for these platforms? Why, George Soros, of course.

IMO, Barack Obama is many things, but dumb isn’t one of them.

I had a standing challenge to every liberal blogger I encountered: Where is the proof that Obama is so brilliant? Show me.

No one could produce any evidence besides he was on a college newspaper, had two ego-indulgent books ghost-written for him, and won the presidency in an era where feelings trump logic, Hollywood is more important than DC, and soft-headed voters treat a presidential election as if they were electing a prom queen.

Fredd ~ I'm sure that there are those who agree wholeheartedly with your assessment in all 57 states!

Interesting 'Manchurian Candidate' theory of yours. What doesn't square with me about your interesting theory is that Obama would willingly portray himself as a dithering idiot to further the nefarious schemes of Soros. The guy's ego is just too enormous to allow himself to look so foolish on purpose.

I think we should use Occam's Razor here: on the surface, the most simple explanation is that Obama is a well spoken idiot.

Silver: yeah, if he was SOOOO brilliant, why not release his Harvard transcripts to prove it? Same reason he is sitting on his birth certificate....

Yeah, all 50 U.S. states, plus the other 7: state of fear, state of shock, state of denial...and a few other states that don't come readily to mind...

Yeah, all 50 U.S. states, plus the other 7: state of fear, state of shock, state of denial...and a few other states that don't come readily to mind...

Why not? He's also been playing "economist" and "underwriter" and "god" among other things...

Wow! Jimmy is now number two?!?!
I wonder if that senile old bastard even has an idea what day it is?
Being said, I have seen little snippets of guys calling it quits at their EAOS during this administration. Sort of like the carter admin. I saw a lot of guys bail. I was stuck. Newly married and a child on the way.
It is painfully obvious that BO is lost. He can't be consistent on a daily basis. It is a new statement on position on a daily basis.
I wonder if he realized that just because he made good speeches(and his teleprompter) and was the Lightbringer, the real world was a tough place. Even tougher than Chicago politics, it is. Because Barry O, killing is a real thing in those places. Ain't nobody gonna sit down and talk, least of all the muslim countries of the world.
Kid is right on the observation of Barry being a tool and nothing more. It is common knowledge here that he is owned by soros. Bet that chaps his hide!