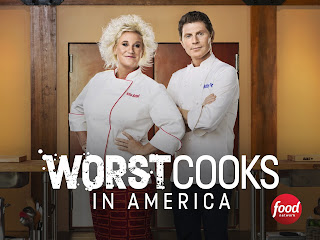 Some of the worst cooks I know think they are 'good cooks,'  my Aunt Sally leading that list.  She thinks some of her fare should be in the "Joy of Cooking" or a Betty Crocker cookbook.  She really does.

Sad to say, Aunt Sally does everything wrong in the kitchen.  Absolutely everything, to include:

1.  The worst transgression a cook can make is to serve food that is supposed to be hot cold.  A juicy steak is no good cold.  Nor are french fries, pizza or any number of other hot dishes.  Aunt Sally figures that just cooking it is good enough, put it aside and wait for the other stuff on the stove to get done, then serve it all up the same time.  No.  Don't do that.  Timing is a crucial part of good cooking.  Pay attention to the cooking time on the dishes you plan to serve, and time them to come off the stove or out of the oven simultaneously.  To do otherwise makes you a bad cook.

2.  Substitutions of ingredients on a proven recipe, never a good idea.  Cooking is nothing more or less than chemistry; all the ingredients interact together chemically to produce the desired effect.  To change anything, and I mean ANYTHING to include ingredients or quantity of ingredients in a proven recipe is to ruin it.  Margarine is NOT a substitute for butter.  It may look the same, but chemically it is nowhere near butter.  Splenda, or other sugar free products are NOT a substitute for real sugar, and skim or soy milk is nothing like whole milk.  Not the same stuff at all, and these different ingredients act completely different when heated.  They are NOT interchangeable.  But you can't tell Aunt Sally that.

3.  Fresh ingredients are critically important to good cooking: it really matters when you use fresh fruits, vegetables, meats and breads.  Frozen green beans are NOT a reasonable substitute for fresh green beans.  And canned green beans should be outlawed in any recipe, they are complete junk.  Frozen leftovers should never be used in a proven recipe, but don't tell Aunt Sally that, her world will be turned upside down.  She actually thinks that previously cooked (well done) and then frozen sirloin steaks are a good idea to serve to guests when re-heated in the microwave oven.  No, no that is certainly not a good idea.  I know this to be true from personal experience.

4.   Cookware and stove tops can make or break the difference between good and bad cooks.  Having some good quality non-stick pots and pans in inventory is a good start.  Aunt Sally has no such equipment; all her cookware was purchased at some point during the Reagan administration.  Some of it was at one point Teflon non-stick, but all of that has since been scrubbed off: well, almost all of it.  There are still a few flakes of the stuff in every mouthful of her fare.  To make matters worse, she has an electric stove top.  Controlling the temperature of these electric elements is virtually impossible, and to suggest she pop for a gas stove top is akin to waving a crucifix at Dracula, or telling a sumo wrestler that he can only eat at the salad bar at Golden Coral. Let's just say words will be exchanged, heated words.  She's going to be buried with that decrepit old electric stove top, as she will never willingly part with it.

If you want the stuff you cook to be edible, just keep things simple: follow the recipe exactly with no substitutions, serve it up at the right temperature, use fresh ingredients and cook it in cookware from this century on a gas cook top, and likely your food will be considered 'tasty.'  Break any of these rules, and you qualify as a 'bad cook.'

Just like my Aunt Sally.
Posted by Fredd at 9:42 AM

Fool: I spent 10 years active duty eating at Mom's mess hall; even my damaged beyond repair taste buds have a dislike for my Aunt Sally's chow.

But I agree, generally speaking: food prepped by others usually (but not always) tastes better than grub whipped up by yourself.

Agree with all of it, Fredd!

I was disappointed when we bought this place because it had an electric stove. I HATE electric stoves precisely because of the lack of fine control over the heat.

BUT.....this stove is a brand-new, top of the line GE stove, and it's changed my opinion. It uses "Inverter Technology" to power rapid heating and cooling ceramic elements instead of a simple switch mechanism selecting sections of a big old Nichrome heating coil.

It's still not as good as "Cookin' With GAS", but it's damn close, and I easily adjusted to it.

Doc: the new fangled electric units, I hear they are much better at temp control. The units I am talking about are those ones with just a great big heating element that has a variable control that controls the heat as much as the mayor of Portland controls the mobs.

I am an exceptionally good cook. Unfortunately, I have an electric stove and no access to gas. Given enough time you can learn to control cooking on an electric stove. It does take some work, but we make do with what we have.

About the fresh veggies? Totally agree. Except - wait for it - I have a love of canned French style green beans, drained, dumped in a bowl, and liberally doused with Balsamic vinegar. When I've shoveled all the beans in I drink the left over vinegar right from the bowl. Needless to say I don't do this in front of anyone except my hubby who thinks I'm insane.

The fact that you eat Aunt Sally's food and keep your opinions to yourself proves your not the hard-ass you claim to be.

Yep, the old style ones with the exposed heating elements. All the "temperature control" did was switch between the two sections of the heating element for "Low" and "Medium", and turned them both on for "High". HATE those damn things!

And yes, our new glass-top stove has acceptable (to me and SLW) temperature control.

We look forward to cooking with gas again, when we finally get our new home.
For now, we make do with electric because that is what the rental place has, and praise God that I haven't burned the rice. Yet.

Adrienne: nobody has the heart to bad mouth Aunt Sally's food to her in person, she is such a great person otherwise. And we all eat it. And thank her for it.

LindaG: once you get used to gas cooking, you can't go back. Well, I guess you can, but expect burnt rice.

Doc: I grew up in a household with those old exposed electric elements. I got fairly good at regulating the heat, but it was not so much the control knob but the position of the pot/pan on the element, the type of pot/pan depending on what you were heating up, and timing. With the advent of a rheostat, it smoothed out these operations to a certain point, but not like gas.

WOW. I can't believe it's not butter? Think again, Sherlock.

And yes, gas all the way.

What's the difference between Hillary Clinton and a ham sandwich?

Nothing. Neither go to jail.

Padre: Stealing my material? Different punchline, same results. And no, it's not butter, its a concoction of all kinds of chemicals that when spelled out would make a buzzard puke.

Fredd, I can't argue with any of that.

Ok, I'm curious what inspired this post. Starving and stuck at Aunt Sally's with zero options for food elsewhere?

I'm a good cook but I know my limitations. My skills start at the BBQ grill and end with pasta in the kitchen. I can do hard boiled eggs too.

Kid: yes, many times stuck at Aunt Sally's, but there is a McDonald's within walking distance. I have eaten at that Micky D's quite a few times for breakfast and lunch. At dinner, I haven't figured out how to weasel out of eating her bad food without coming across as disingenuous, ungrateful or flat out rude. She's a wonderful person, but just can't cook worth a damn, her one and only flaw. IF only I could have one and only one flaw. It's just that this flaw of hers adversely affects me more often than I would like.

Any suggestions? Her cooking will not ever improve, never. ANd I will be stuck there at her dinner table for years to come, Aunt Sally is not that old.

Kid: my Aunt Sally never uses a crock pot. Maybe she should start.

Tell her how much you like spaghetti. No one can screw that up.

Kid: my Aunt Sally is one of those who wants to try new things, and is never going to serve up anything the way it is normally done. If you want apple pie, she has to add rhubarb and honey to it. If you ask for baked beans, she's going to throw in some paprika and mustard, maybe some peanut butter or some other ingredient to make it odd.

Spaghetti? Sure, she will make a sausage based cream sauce to pour over the pasta, and call it spaghetti. You may think nobody can screw up spaghetti, but I am here to tell you; Aunt Sally can. And will. And has.