Sulemani no longer 'a nuisance.' 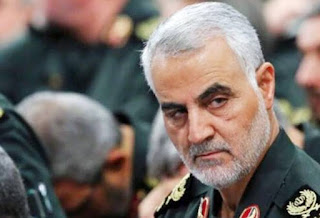 Remember when John Kerry was campaigning for president in 2003/4 and called for a return to the days when we considered these Middle Eastern terrorists such as Sulemani to be nothing more than a 'nuisance' rather than imminent threats?

These terrorists and their 'nuisant' ways have been responsible for perhaps hundreds of thousands of deaths over the past few decades, to include Americans, Iraqis, Syrians, Yemenis and even Russians and Iranians.  You should ask the family members of those killed by this terrorist general and see how much of a 'nuisance' they consider this guy to be.

Of course the Neville Chamberlains of the left will conduct massive shows of great wailing and gnashing of teeth at this war mongering president for authorizing this targeted drone strike, but let them.  Appeasing the mullahs with pallets laden with cash money has gotten us nothing but body bags.  Obama figured he could buy his way into a peaceful Iran with this foolish offering, and we see what we got in the bargain - nothing but more Iranian aggression and death for many Americans and their allies.

The Iranian mullahs are now promising a devastating response to this 'rogue' action.  I say bring it.  Afterwards, we will target all of those forces who generate anything close to revenge, and then sit back and see what else they got.  Which is not much, as Iran has always been a weak bully in the region.

We simply chose to punch the bully back.  It works every time it's tried.
Posted by Fredd at 7:53 AM

Kudos to not just the President, for authorizing the strike, but for those who carried it out. Drone strike away from the airport so as to not harm innocents (there must be a few in Iraq). The intelligence gathering to prepare the plan. Lastly, everyone involved keeping their damn mouths shut. More to come?

It worked for me in grade school. Once you bloody their nose good they seem to find other things to do.

But then the people I dealt with in grade school weren't Stone Age savages with modern weapons.....

Once Iran is a sea of radioactive glass and the mullahs are no more, the world can kick back and say, "well, that's that." Maybe have a ham or something to celebrate. And I know that you're very trusting of Aunt Sally these days, but don't trust her ham sandwich.

Fool: yes, The Donald did good. And of course the most dangerous man in America, Cryin' Chuck Schumer, says the president did just awful. Somebody's right and somebody's wrong. Time will tell which is which (I already know, but sometimes my fellow Americans are a bit obtuse).

Doc: no, Stone Age miscreants cannot be deterred by a punch in the nose. They need to be riddled with bullets or blown to smithereens by missiles or bombs.

LL: turn Iran into a sea of glass? Nah, we need those oil wells. Just bomb their cities into cinders, and then let the remaining population deal with whatever mullahs they see wandering about. Once they re-install a shah, then we can talk about giving them their oil wells back.

And not so fast about that trust thing I have with Aunt Sally's cooking skills: even a blind squirel finds a nut every now and then. A clock is right twice a day, and Aunt Sally stumbled into a recipe that she didn't desecrate.

We are not blindly shoving Aunt Sally's fare into our pie holes unconditionally, we have history to consider; a long, unsavory history.

John 'Munster' Kerry called for a return to the days when we considered these Middle Eastern terrorists such as Sulemani to be nothing more than a 'nuisance' rather than imminent threats? And we law-abiding citizens look forward to/the day that illegally docked $7.0 million dollar sailboats get more than a traffic citation and pay the 'full tax avoidance fine' in Massachusetts.

Tcatg: yes, a little Patton for the day.

Tax avoidance? I say it should be tax evasion, a felony, and that Bolt Neck should have done some hard time on that one.

Man, I hate the left so I've been totally ignoring them. I just read we killed a couple more in Iraq that are tied to Iran. Let's get it on !

I hate the left, too. Everybody does. Except lefties, duh.

Fredd, Yes of course, the population of the Earth has been scammed over climate/environmental things for decades now. Damn I hate how stupid people are. These scammers should be tarred and feathered or at least in stocks in town center.

It's our world isn't it. Surrounded by morons led by evil bastards.

Well, they are making their future. Not mine. I won't be here when it really goes to shit. Some could argue it already has but not yet for me. Give me 20 more ya bastids.

Killing is never ok. But under-saving intentions/prevention of further DESTRUCTION/enrichment of life for every-being...these are justified motives.

Carbon Taxes?? Who can spell Enrichment of Elites and Stupidity of Ignorance??

Exactly Fredd. Imagine how stupid the average person is, then realize 50% of them are even stupider.

Kid: yup, we are knee deep in dummies in this country right now. And a lot of them vote, and vote for free stuff. Which anybody who is not a dummy knows is not free, somebody pays for all of that 'free' stuff.

Dopes, everywhere you turn, you can't swing a dead cat in this country anymore without hitting a dope.

Right on. Note how quickly they stood down.

Padre: I am frankly disappointed in our prior 'leaders': allowing this tin pot mullah-led puny third rate country to wreak havoc for so long. We should have sunk their entire navy, demolished their entire air force, wasted all of their surface missiles and so on a very, VERY long time ago.