Diane Feinstein needs to pay for her malfeasance 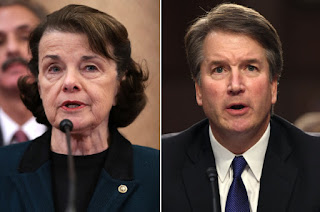 Sen. Diane Feinstein (D-Ca) received this letter from the disingenuous liberal Dr. Christine Blasey Ford describing an unsubstantiated sexual assault by Brett Kavanaugh while they both were in high school.  Over the last week or two, any witnesses to this have all declared under penalty of perjury that it didn't happen.

No evidence to support the claim, none whatsoever.  Yet DiFi's staff leaked this letter to the Washington Post a mere week before confirmation vote in the Senate, despite Dr. Ford wanting to remain anonymous.  DiFi ratted out her constituent, defiled the confirmation process, and disgraced herself and the collaborating Democratic members on the judiciary panel.

This was an attempt at overturning the will of the American people, a coup on our system.  Elections have consequences, and the victorious president should be allowed to seat whomever he feels is qualified for SCOTUS.  DiFi is in no position to thwart the results of U.S. elections, and she needs to be sanctioned in the most severe way possible.

If I were President Trump, I would issue a tweet to the citizens of California: either call for an immediate removal of DiFi from her senate seat via a recall, and replace her with a Republican acceptable to Donald Trump, OR: President Trump will close every military base in California and transfer the personnel and assets to other states; suspend all federal funds destined for the California treasury, remove any and all federal assets from California, suspend any and all federal infrastructure payments to California, demand an immediate repayment of any federal loans issued to any California interest, and on and on and on....then let the lawsuits fly, and tie up any funding for years to come.

Of course, I am not President Trump.  But I think The Donald has it in him to fight back against this coup attempt by DiFi.  She needs to pay for her malfeasance and skulduggery, and she must suffer a very high price.
Posted by Fredd at 6:15 AM

Good ideas, but the President doesn't have all those powers. She is up for re-election. Hopefully, she will lose. Her opponent is another (P)regressive piece of shit but will enter the Senate with no seniority.

DiFi's driver of 20 years was a Chinese spy.

DiFi's husband made several billions during her term in the US Senate, based on favorable government contracts (graft, in conflict of interest) and on the "ambassador-at-large" status that he enjoyed in the People's Republic of China.

An unhindered investigation into her past may unearth felonies in which the statute of limitations has not run. But who would conduct that investigation? Certainly not the FBI, discredited, and every bit as corrupt as Feinstein herself. Who ultimately investigated the Ruby Ridge Incident where an FBI sniper killed a pregnant lady on her porch after FBI cover ups (worth looking at as an example)? It was the Postal Inspection Service, federal agents, who Congress felt were apart from the swamp enough to do a fair and honest job. But that might not work for Feinstein because her husband made billions buying and selling land for the US Post Office.

It's a deep swamp, Fredd, and DiFi is only one swamp monster. The cleansing could start with her - with Hillary - with your senator, Dick Durban, but it needs to be exposed and disinfectant needs to be spread. Trillions in graft.

The problem is, she is a lib, and it doesn't seem like they EVER pay.
Just like Pelosi. They keep getting re-elected.

It would be extremely difficult and expensive to move all military/government resources, I think. But I do get your meaning and I agree.

There should be a penalty. I just don't see it happening.

They just need to get Judge Kavanaugh confirmed.

Ford should have gone to the local police and reported what she felt was an attempted rape 36 years ago. She should realize that by her remaining silent for 36 years and through 6 prior FBI vettings of Brett’s nominations and confirmations to very high positions, she forfeited her right to come forward and throw an allegation at an SC Judge without any corroboration and without any details that would allow the accused the slightest chance in hell of defending himself. This one fact alone proves 100% she is a political hack who lay bare in the democrat tool box to be willingly deployed at the will of Democrats who couldn’t care less if she lived or died.

Ford willingly had the letter leaked.

Otherwise, we should have stopped sending federal money to california as soon as brown signed the sanctuary state law. This is not an immigration issue, it is national security.
How do we know moslem vermin are not hauling atomic bomb making parts across the border, such as through the 50,000 acre ranch in AZ where it is reported they are pouring in by the hundreds every day. Unreal. And the republican majority congress has done jack nothing about fixing immigration law.

Fool: maybe he doesn't have the authority to do all of this, but he sure as hell can recommend action and twist some arms. The GOP still has majorities in both chambers of congress, he can certainly come up with something punitive.

Of the swamp dwellers, certainly Hillary is the swampiest. Then Chuck Schumer, he's pretty daggum swampy. But DiFi is way up there, too. And it would do us well to see her brought down a peg, this latest is just beyond the pale. She is rotten to the bone, and needs purging. And just FYI, Dick Durbin, although representing my interests in the senate, is not MY guy. Just like Jeff Flake is not YOUR guy (yet). Or Diane Feinstein is YOUR gal (currently). Sure, all of my neighbors seem to live Dicky, but I have some pretty daggum stupid neighbors, that's for sure.

LindaG: you're right - nobody on the liberal side ever seems to pay for their malfeasance and skulduggery. It's high time they started being held accountable, starting with DiFi, that rotten, no-good, Chinese-spy-hiring, husband-taking-swamp-money-marrying, major league malfeasant.

Kid: I vote for Republicans, but I would not consider myself one: I am a conservative, and the GOP has gotten so swampy that I can't see myself as one of them. They have let me down so many times, when we vote them in on the basis of what they promise on the stump. Once they settle into their cushy congressional offices, they seem to forget who put them there. A pox on all of them.

Kid: the lesser of two evils, useless is much preferable to evil. I'm with you.

I'm no expert, Fredd, but I'd say LL nails it -- trillions in graft and they're howling and raging in fury at the prospect of that spigot being turned off or even turned down a little.

Will their brazen, malfeasant, skulduggery win the day? I'm hoping it's opened enough eyes to bring about a red wave in the next few weeks.

In the meanwhile, throw DiFi in Gitmo, where she belongs. And Hillary, and Comey, and Jihad Brennan, and Obama, and Lynch, and Holder, and the Podestas and... well, the list is long.

And the rogue's gallery you listed, lock 'em ALL up. Immediately.