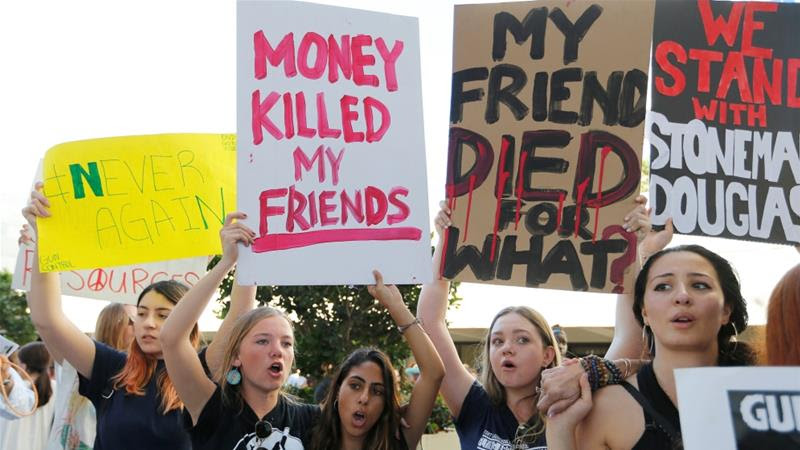 After the terrible massacre in Parkland, Florida, a group of students began the chant 'no more guns, no more guns!'

While I can understand their grief and the desperate wish to do something about this attack, their chant will fall on deaf ears.  Who these teenagers are in reality chanting to are those who will never bow to the wishes of others: criminals and whack jobs that kill for whatever reason.

These chants are pathetic and useless.  Since man crawled out of the ooze, there have been those who will kill others.  It is just the way of humans, always was and always will be.  It is just the chants against this that is relatively new.  These chants worked to sway public opinion in the Vietnam War, and they worked reasonably well in the Civil Rights Movement led by Dr. Martin Luther King.

But the reason these recent chants worked, was that the message was aimed at a civil society.  Public opinion was eventually changed, and our way of doing things regarding these two events was redirected.

Not so with chanting for criminals and whack jobs to change their behavior: they are not civilized, nor do they succumb to public pressure.  Gangs in Chicago murder people willy nilly, and the loved ones of the victims chant 'no more murders.'

Fat chance that the murdering scumbags will hear those voices.  They just don't give a damn about who they murder, or what happens to those left behind.

Did we hear chants from the citizens within walled cities a thousand years ago, decrying Ghengis Khan from ransacking their society, 'no more seiges!'  No, nobody chanted for that.  Would Ghengis have listened to these chants?  Right.

Did we hear the residents of London after Nazi bombing raids destroyed their neighborhoods chanting 'no more bombing raids!'  No, no chanting for anything like that.  Would Hitler hear these chants and stand down?  Nothing could be further from reality.

And we heard no such chanting historically for good reason: the only way to stop people who want to kill you is to kill them first.  That is the only way, and this is not even arguable.  It was well understood by everybody back in the day.

So it must be today as well.  As Wayne LaPierre of the NRA pointed out with God's truth: 'the only way to stop a bad guy with a gun is with a good guy with a gun.'  Period.

Scumbag murderers almost always choose soft targets, poorly defended populations for their mayhem.  Harden these targets by arming the good guys among them.  For a population of every 50 unarmed folk, arm a guard.  In a school of the size of the Parkland high school of 3,000 enrollment, 60 armed personnel would essentially harden this target to the point that no scumbag would choose this for their atrocities.

We can argue about the ratio of armed good guys to unarmed citizens, but this is the way to do it.  And don't point out to the bad guys who is armed and who isn't by slapping a uniform and badge on them with an exposed side arm or shouldered rifle; concealed carry is the way to do this.  Once a bad guy starts shooting, he can count on somebody shooting back in short order, but will not have any idea of where the return fire will come from.

This is the only way.  Gun control is a fool's errand.  There are 300,000,000 guns in the U.S.  Outlawing guns is simply going to take away guns from law abiding folk, leaving the outlaws armed, since outlaws by definition do not obey the law.

No more chanting, just arm more good guys.
Posted by Fredd at 8:38 AM

It's not that difficult to hire security for schools and it's not that challenging to restrict avenues of entry and exit. Educators balk at those restrictions but the media has so glorified school shooters that a small segment of the school attendees want to grow up to be a school shooter. It's the same with airlines. It's the same with communities. The areas of the nation where the most number of citizens (per capita) have firearms and where the law supports that, are the VERY SAFEST.

That argument is kryptonite to progressives, but it's true.

.02% of all firearms are used to commit a crime. That's how the stats run and the number is statistically insignificant.

The problem is that modern society is so far removed from reality that honestly BELIEVE what they espouse.

Of course I am spot on, LL. Between the two of us, we know everything. Just ask us. Just don't ask my wife, however...

To your point, progressives think of Wyoming as the wild, wild west: where there's a gun fight going on every day on main street of Jackson Hole. They truly believe that once they cross the border into Wyoming, their chances of getting gunned down are about 50-50.

But the truth is that Wyoming has the lowest murder rate in the country, and yet nearly every citizen is packing heat most of the time. How does that square with the progressive assertion that you are risking your life breathing the air in Casper?

It doesn't square. Truth time again: progressives are wrong about everything.

Gorges: sadly, yes. Modern 'reality' is anything but reality. Take 'reality' TV shows: does anyone actually believe that these crappy shows are not loosely scripted? Well, anyone with half a brain?

Twits getting worked up and then sneaking off to have sex.

You are so right, Fredd.
And I watched the White House event with Trump, Pence and many survivors and even parents of the dead.. It went SO well, yet the leftwing media has pounced on ANY possible insult someone might have felt from Trump or ...well, ANYTHING they can do to slam it...and it was so good, so uplifting, fair and such a good way to hear others' points of view. So sad. And the Left blames US for not reaching out? W(*&(*#$&%

After WWII, did we all chant No More Nukes! at Soviet Russia? Naw, we armed ourselves and created MAD - Mutually Assured Destruction. Putin has recently stated that no one would survive a nuclear war between superpowers. Those no vaporized would die quickly from the massive amount of fallout.

This is the perfect example for why criminals with guns need to be overwhelmed by good guys with guns.

There is nothing more naive, uninformed, retarded, and dadblamed Stupid than an anti-gun person.

Z: yes, that meeting with those kids and parents went well, and no, the media will never EVER cover anything positive on this president; it's who they are, it's what they do.

Kid: I agree, being anti-gun is just down right idiotic. It's like being anti earth quake, or anti sunami. These idiots argue that if nobody had a gun, nobody would get shot.

Of course. And if there were no gravity, we all could fly. BUT THERE ARE GUNS! THERE IS GRAVITY!

'No more earth quakes!' 'No more sunamis!' Or better yet, 'hey hey, ho ho, earthquakes have got to go; hey hey, ho ho....' I always love that particular chant. Yeah, these kinds of chants will change things up, just you wait and see. Well, we all are still waiting, you dumb pinkos...

Fredd, I totally agree. But look, let me offer another kind of chant.

Only Texans know that one.

That particularly rankles me.

In 1968, there was a movie called Wild in the Streets. Read about it at the link I have in this comment, and you'll see why I keep thinking of this film when teenage activists crowd the streets and monopolize the mainstream media.

I get your point, however, but agree with the critics of the time in that this plot was 'ludicrous.' Everybody knows that you aren't allowed to make social decisions on a national scale regardless of the nature of the hissy fits and tantrums you throw until you are 40. Just ask Jared Kushner.

Fredd,
I'm not sure some 50 years later why I went to see Wild in the Streets. Perhaps it was the hit song "The Shape of Things to Come," the movie's theme song, which sent me into the theater. I remember that my mother went with me and that we discussed the film afterwards. Remember that in 1968, 18-year-olds didn't yet have the right to vote. The movie did nothing to promote that idea, other than to promote the counter-culture agenda.

In my view, the parading of the students of that school in Parkland all over the media 24/7 is ludicrious!

Being a survivor of a mass shooting does not embue a survivor with wisdom.

You know if these teens would stop bullying other teens and if they would get troubled youth the mental help they needed, then there wouldn't be many shootings at all. These shootings should be turning the mirror back on the teens themselves, not guns. Guns don't kill people, people kill people. They should be standing up for other kids getting bullied instead of standing there doing nothing or joining in to help bully them. Also, if they see another kid is having problems, why don't they tell a counselor, or some other adult to help the kids that need help??? Instead of as usual, trying to blame every other thing for the issues, direct the attention to the real problems, themselves!