Liberal pockets of free cheese still plague the US 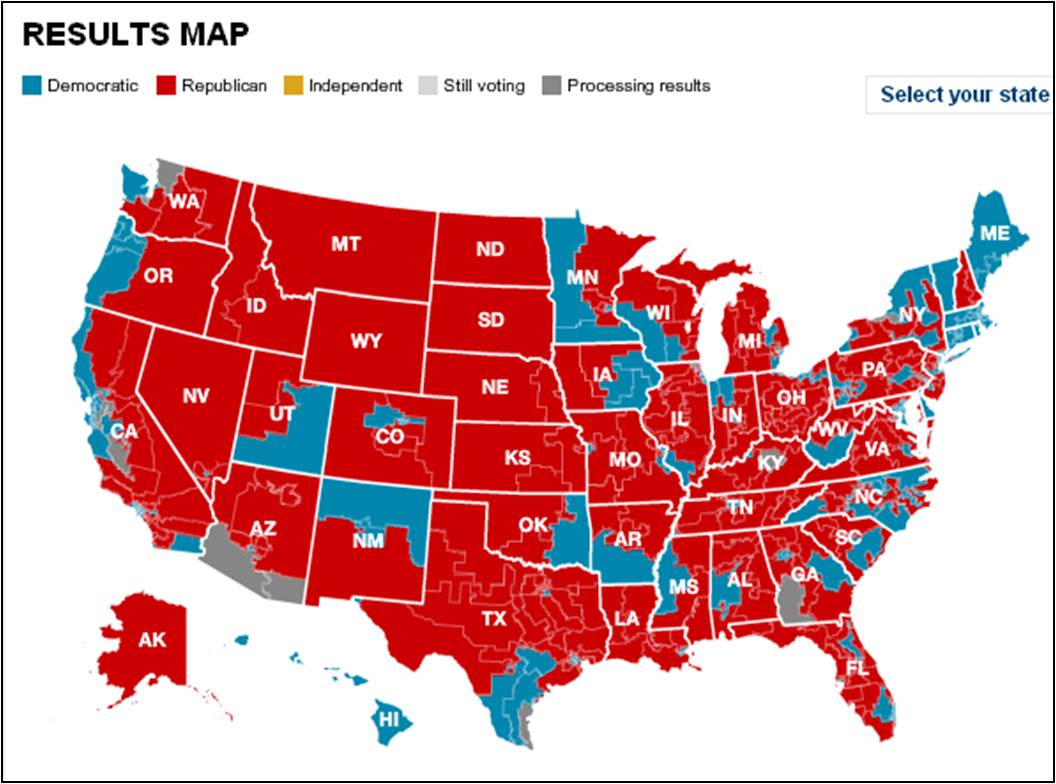 From the looks of this map, with red representing conservative land areas by county, and blue liberal, you would think the U.S. House of Representatives would consist of 400 Republicans, and 35 Democrats, right?

Nope.  With a few out-lying areas of blue, such as most of New England, much (but not all) of the blue liberal land is high density population areas which vote Democrat, even in Republican wave elections.

Why is that?  What is it about big cities that makes people vote against their own liberty and freedom?  Why do they pull the Democrat handle in the booth straight down the line in these blue urban areas?  Is it the water?  Maybe.

But mostly its the concentration of population that allows Democrat ideologues to prosper by simple logistics: it's easier to deliver the free government cheese to one big huge warehouse in one big city, than deliver the free government cheese to thousands of tiny warehouses spread out over  hundreds of thousands of square miles all over God's green earth (to borrow a Michael Medved phrase).

People who are susceptible to huge government promises to take care of them from cradle to grave typically have nothing: no skills, no cars, no education, no money, no land, no nothing, and they wind up in ghettos and slums packed on top of each other in big cities.  And when a slick talking liberal politician shows up on the urban stump with a bullhorn promising to take the money from those that greedily hoard it for themselves and give it to the mobs, who do you think they vote for?

It's not rocket science.  It's simple logistics.  This also facilitates the famous 'get out the vote' efforts that Democrats excel in: just drive around the ghettos in Democrat buses, with signs on the side stating "Get on this bus, vote Democrat and get free cheese...and cigarettes".  Hardly any money is spent on the diesel for the get out the vote buses, since they only have to drive for a few hours to pick up a couple of million low lifes and haul them to the polls.

Democrats know where their bread is buttered: high density population areas, where people and rats number in the millions. This is where they make their money.

And it clearly shows on the map.
Posted by Fredd at 4:49 AM

"...a couple of million low lifes..." many of whom can't read or fill out forms and need "help" voting.

Except NOTHING is free, since it all is paid by others.

Don't get me started, Ed.

Joe: if I were made America's king, I would mandate that voting requires skin in the game. If you don't have a job, pay taxes or are otherwise a productive citizen, you are no better than a felon. I would be the 'Vote Nazi': no vote for you.

Of course, since I would be king, that position would be exempt from the wrath of the voters.

At first, voting in the US was controlled by the states and was pretty much the sole province of white property owners. I think it all went to h*ll when women got the vote.

Notice the encroaching blue around the borders with Mexico. Coincidence? I don't think so with Mr. Barack "What's-the-Constitution?" Obama in power.

Encroaching blue: the more I look at this map, the more I see red as healthy red blooded American tissue, and the blue is encroaching gangrenous tissue.

And you are right about Barry: he treats the Constitution as a piece of toilet paper, to be used after his morning constitution.

Fredd: Maybe, as a statement, we should change the map to be red and sickly green. Pussy green gangrene seems to be more appropriate to the policies of progressives.