"Undecided voters" are among the dumbest Americans 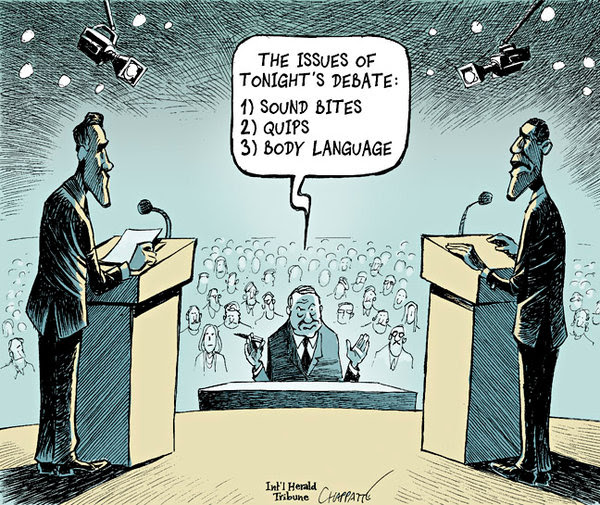 Love him or hate him, Barack Obama is in the news every hour of every day, and has been for the last six years.  And Mitt Romney is not exactly a shrinking violet, either, over the last 18 months or so of the 2012 presidential campaign.

So how is it that there is a single American out there anywhere who hasn't made up their minds about one or both of these guys?  They are on every media outlet spouting their message to the masses constantly.  These two guys are ubiquitous: like Chicken Man, "they're everywhere, they're everywhere."

And yet Dr. Frank Luntz seems to pack rooms and rooms full of these undecided morons.  Luntz asks these fools why they support one guy over the other and lately, these imbeciles are starting to break for Romney, and break for him in a big way.

Well duh, you idiots.  Nothing Obama has done over the last four years has worked out at all.  He is a complete and utter disaster and failure.  And you guys are just now figuring it out.

The irony of all of your awakening to the obvious, is that your vote will be the one that puts the right guy in office.  The United States of America will be put back on the right track courtesy of the vote of the truly dumbest voters: the undecideds.
Posted by Fredd at 12:02 PM

I think they just like the attention and also enjoy appearing non-partisan.

I am in complete agreement.

Seriously, unless someone was 14-15 at the last election and now they have their 1st chance to vote and are just now tuning in...
How anyone could be over 18 and witness to the last 4 years and Not have come to a decision to the point they need to watch commercials and marketing performances(debates) is Unbelievable.
The stupidest bastards on the face of the planet.

And isn't it Lovely that THESE are the people who will decide the election! hahahahaha haaaa. Good God Y'all !

Silver: I disagree. They are stupid, plain and simple.

They never mention what a failure the moron obama is!

Moron obamabots lie about being UNdecided.

The "undecided" like to pretend that they are undecided because they think it makes them seem more thoughtful and "fair."

Of course it does neither.

They are actually basically unprincipled, or too wishy-washy to stand on principles.

By the way, I thought I was the only one in America who remembers Chicken Man.

Joe: Chicken Man, just you and I remember this great radio program, apparently.

It was regularly aired when I was serving overseas on Armed Forces Radio back during the Carter administration (yes, I date myself here, I admit it: I am an ancient geezer).

I don't believe there really is an undecided vote. Most people know who they will vote for. And within six months of the election, not much will sway them the other way.

The "undecided voters" are merely the way that both sides of the fence "justify" spending the MILLIONS of dollars on propaganda and slander.

The professional pundits estimate that the undecided percentage is about 20%. Meaning, the other 80% are the Dem and Republican base.

I agree with you: these morons know who they like, but when asked, they don't want to offend anyone. I call them weasels, but what do I know...

I often wonder about the extent of the agent provocateurs, who seem to be working overtime these days. A few of these “independent voters” have revealed themselves as “anything but” during Lutz’s interaction. Meanwhile, close to 600 people over the age of 112 voted early in North Carolina. Naturally, Barack Obama doesn’t know anything about that. So I agree with you and then let me add this one final thought: yesterday the talking heads were speaking about what a great patriot George McGovern was. How is anyone who supported or voted for an avowed communist patriotic?