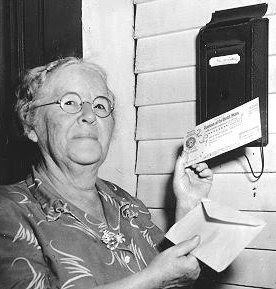 There's a political ad running in Illinois right now depicting old, decrepit angry geezers admonishing a young conservative politician to keep his hands off of their 'so-security.' These whiny, pathetic geezers were lambasting the conservative politician because he dared suggest that perhaps we should consider raising the retirement age for 'so-security' in the face of an imminent collapse of this ill-conceived FDR-era Ponzi scheme.
.
One of the characters in the ad sniffed that 'we've paid our whole lives...' I would just bet that this ol' biddy paid perhaps a total of $30,000 into the system over her lifetime, and has now taken out over $150,000 (and counting....), and yet demands that we keep our hands off of 'her so-security.'
.
Just how do these geezers sleep at night, knowing that their social security checks are paid for by directly taking out funds from younger worker paychecks, and also knowing that the checks many geezers are cashing every month are well above and beyond what they ever put into the system in the first place? They must surely know that the checks they are cashing are not the funds that they contributed, and that were stored safely away in the So'-Security Lock Box. Are these old geezers that stupid?.
.
Apparently so.
.
But to get downright indignant that a politician suggest that we do something to stop the unfair and unsustainable transfer payments from the young to the undeserving old is just plain un-American.
.
Most of these old codgers know full well that they have taken way more out of the system than they EVER paid into it, and that they are eating off of their fellow American's tables directly and unashamedly. Have they no shame? Have they no honor, no integrity, no sense of self sufficiency? Simply look at their paychecks over their working lives, and calculate their contributions, and they must surely know that they are now pure and simply sticking their old, wrinkly liver spotted hands directly into younger American pockets, and stealing THESE YOUNGSTER'S money, and beggaring the generations that are following them! .
This is the "Greatest Generation" that I am talking about. They were the ones that were directly responsible for ensuring that Hitler and Tojo were defeated, and that we continued to teach our children (me and my fellow Baby Boomers) English, and not Japanese or German. Remember those honorable folks, the folks who suffered, sacrificed, fought and died during World War II for the American way of life? Those guys? What happened to them?
.
And yet they have the unmitigated gall, the nerve, the temerity to scold a young politician who sees this unsustainable Ponzi scheme of Social Security for what it is: a complete transfer of wealth from young Americans to old Americans. This is not the America they fought for and won great victories in World War II.
.
Social Security was never intended as a retirement account. It was only set up to assist the poorest among us in making ends meet, and not to finance a lifestyle of meeting every want and need of the geezers from every walk of life, from the age of 62 until they die at age 85! Do the math, geezers! You already have drawn out your contributions, probably DECADES ago!
.
And you excoriate anyone who wants to try and fix this nasty, Socialist mess?
.
Shame on you, America's slacking, mooching Social Security geezers.
Posted by Fredd at 12:01 PM

So -security was also created when people didn't live until a hundred! life expectancies were lower and people were only expected to get so much....

While I agree we all must remember that what is really affecting the ponzi scheme is Social Security Disability.

This is connected to all SS funds and is strife with fraud. Here is a good little link and in it you will find this beauty:

"If a person receiving Social Security disability benefits has a dependent under age 18, the dependent may also be eligible for benefits"

A reminder as well, the CURRENT congress is contemplating (seriously) the exact same measure.

Once politicians got their hands on this never ending pile of money, it was doomed to failure eventually.

Yeah, I just picked one of many problems with FICA. To cover them all, I would still be typing today...

Fraud, waste, abuse, this program is lousy with fraud. Dead people still get SS checks, and fraudsters cash them every month(to the tune of billions and billions).

Illegals get their SS checks mailed to them in Guatemala, Honduras, Mexico, etc. as well as to addresses here in the US, and they get cashed every month (to the tune of billions and billions).

Young people get SS checks, for exactly the reasons you cite, and cash them every month (to the tune of billions and billions)

Non-persons get SS checks, like dogs, cats and parakeets, as long as they have a SSN, and those checks are cashed by their shameless criminal owners every month (to the tune of billions and billions).

What really is wrong with Social Security is that it is an ill conceived, unsustainable Ponzi scheme that should have been set up on an investment return instead of the redistribution of wealth.

Like all government moves, it was a play for power and economic control, not to help people.

If those old geezers had been properly taught how to put the same money into sound investments, they would be better off and so would the rest of the country.

Absolutely right Fredd. Never meant to be a 20 year vacation.

Something is needed in the forced retirement savings area, but the current system is the result of decades of politicians kicking the can down the road. And now the situation is impossible.

Though I must point out that if the evil moron LBJ hadn't put the SS money into the general fund, things would still be hunkey dorey.

Wow Fredd, you really lit those oldsters up! Better watch you back when walking by the community center.

I can see the news now, "man beaten by cane wielding gang of pensioneers."

In their defense, they've been indoctrinated by 60+ years of progressive propaganda.

Exactly right, SS from the beginning gave the appearances of a retirement account, as everybody got a SS account number, and after awhile we all started getting these 'account statements' from SS regarding our lifetime contributions.

That's where the appearances stop, and the Ponzi scheme starts, since money flowing from contributions never gets into anybody's 'account,' but rather disappears into the giant hungry maw of the general treasury fund. No accountability is possible after money hits the general fund.

Kid: LBJ was possibly the worst president ever for doing just that, and that is saying something, right Jimmy and Barry?

Yeah, as Neal Boortz once put it, 'somebody's gotta say it.' At the ripe old age of 55, I have been exposed to the same, lame lying crap from liberal pinkos about the perpetual solvency of SS nearly as much as most of the geezers (or as you might politely say 'oldster:' puh-TAY'-to, puh-TAH-to.)

I never, ever believed a word of it, but those stupid brain dead geezers bought that pack of lies hook, line, sinker, boat and marina.

What kind of stupid moron (aka geezer) believes that a system that they contribute $20,000 into, and subsequently pull out $150,000 is sustainable? Even with the wonder of compounding interest, that dog just don't hunt with anyone with even a little bit on the ball upstairs.

Yeah, unfortunately, most in this country are mathematically challenged or willfully ignorant.

With the geezers, most are the latter, willfully ignorant. They have been on the gubmint dole for so long, and many are reasonably proud folks, they choose to be stupid on this topic.

Sure, they'll tell their 26 year old grandson Gen X/Y slacker to go get a damn job, even as they simultaneously open the envelope to their government welfare check.

The disconnect with these geezers is enormous, and I mean gigantic.


It occurs to me now that if it wasn't for WWII, and the resulting take no bullshit attitude of American's after kicking the rest of the world's ass, that we might just be socialism/communism long before now.
Those guys that came back from that war weren't going to take any shit from anyone. No way in hell pelosi, reid, and all the rest of the uber-morons would have ever been elected in the first place. Not by those people.

I dunno, Kid. Rating bad presidents is always subject to debate, and I would rate them by the lasting damage:

LBJ: his FICA blunder has beggared our nation, we're bankrupt.

Carter: although he is directly responsible for creating the Islamic environment of hate, they haven't killed all that many of us, if you do a body count. Not like Japan or Germany. Or the North and South casualties of the Civil War (or War of Northern Agression if you are south of the Mason Dixon). Carter's damage is not all that great, considering.

Obama: no damage that can be directly measured yet, other than unemployment figures and the deficit (which nobody feels; YET).

In the fullness of time, I'm sure the damage Barry has done will rise above these other two morons.

Fredd, Measured within your timeframe, I agree.

If you're interested, here is a post I put up not too long ago explaining now "so security" was set up to work in the first place.

The biggest thing to note though is that you had to outlive the average life expectancy by 3 years and 5 months in order to start collecting in the first place.