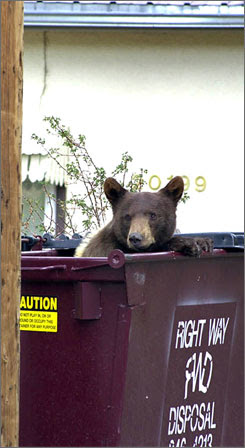 Many of you are familiar with our national park system, and the many signs always posted in Yellowstone, Yosemite and Grand Teton national parks “Do not feed the bears.” What happens when tourists hand out to mooching bears handfuls of goodies in their picnic baskets? You get more and more mooching bears. Bears are not stupid, and neither are professional bums, for the most part. And when I say 'professional bums,' you know who I mean; the scuzzy moochers who beg for money on every major metropolitan street corner as a way of life. Both of these populations - bears and bums - exhibit predictable behaviors: give them freebies, and the word spreads that freebies are afoot. Pretty soon, the place is crawling with moochers - both bums and bears. Speaking of begging, this phenomenon begs the question: just how do we as a nation go about dealing with our ‘professional bum infestation' in the United States these days? What should we do with them? Scoop them up and hose them off? Put them to work…? How about we just stop as a nation supporting the ‘bumly’ way of life? Like all living creatures, bears will choose the easiest way to survive, and not waste any unnecessary energy in inefficient ways. Scrounging for low caloric foods such as nuts, berries and grubs is highly inefficient when they have access to an alternative unending stream of tourists who toss them fat and sugar laden high caloric yummies such as turkey drumsticks, slices of cherry pie and Hostess Twinkies. With such feasts laid out in the parking lot for the taking, only the dumbest of bears are still out foraging for berries and grubs. The bears with any brains whatsoever are hanging out in parking lots and other places where tourists feed them like kings. When tourists feed bears at our national parks, these bears no longer forage for natural sources of food, but rather congregate in great numbers near their human benefactors, where they become at best a nuisance, or at worst dangerous. So it is with bums, and there is no perceptible difference between the behaviors of these two species of mammals. Like any other mammal, they will flourish in environments where the pickings are easy. And our professional bums are doing just that. They typically hang out where they are most visible, likely in urban settings, and beg for money from passers by. They are sure to make themselves look as pathetic as possible, and have their sad sack, down on their luck stories polished to a highly toned presentation. What happened to all of those bears that were congregating in the parking lots of our national parks? Once the park service started cracking down on bear feeding by clueless tourists, did we see bears dropping dead by the hundreds of starvation, clogging the parking lots with their dead corpses? Did the park service personnel have to stack up dead bear bodies like cord wood? Of course not. These bears, once the food supply dried up, simply moved on in search of better and more reliable fare. Governor Tommy Thompson (R-WI) started several programs such as these in Wisconsin several years ago, and once they were originally proposed, liberal bleeding heart opponents wailed and gnashed their teeth at the cruelty of such draconian measures, predicting that the homeless and forlorn would die in the streets in great numbers. Remember that prediction? They said that if these mean spirited measures were enacted, the loss of lives and mass starvation would be shocking.
What happened?
Bums no longer got hand outs from the state, but were required to start working instead. The bums in Wisconsin just started working, or moved out of state to where the pickin’s were easier. Governor Thompson just “stopped feeding the bums.” And we never saw any bum bodies stacked up like cord wood in alley ways, as they dropped dead from hunger. As usual, the liberal pinkos that predicted doom and gloom, death and woe for their homeless constituents were dead wrong. 'Don't Feed The Bums.' It’s as simple as that. We need more welfare to work programs, and a bit more ‘tough love’ with these moochers. When populations (bear or otherwise) are forced to mend their ways, they do so every time. But how do we change the climate here in the U.S. that has become used to feeding and tolerating “the homeless,” the “unsheltered” and those “displaced populations?” Like all liberal programs and ideologies, they were not embedded into our national consciousness over night. They were purposely and insidiously fed to us in bits and bites, incrementally increasing our tolerance of the bums in our midst to their current unacceptable levels over years and decades. We will just have to start to reverse the trend with public service announcements such as “Please Do Not Feed The Homeless.” Then in time work on placing more derision on these moochers among us as time progresses. We have to make the ‘bumly’ way of life an embarrassment like it used to be in the good ol’ days. Sure, there will always be bums, but just not so many of them. Our goal is to attach some shame to begging and mooching, rather than tolerate these moocher’s bumly way of life as an acceptable profession.
Once begging for a living no longer works, these bums will move on to other more productive behaviors, just like the bears did.
So just remember, 'don't feed the bums.'
Posted by Fredd at 9:18 AM

It seems everytime a major event is to be staged like the Olympics or dare say a political party convention (both parties)cities go to great lengths to clear the streets of bums.

Why not have the same attitude 365 days a year starting with your proposal.

Well, yeah, they 'clear the streets of bums' but relocate them to other streets, where the bums are greeted warmly with food stamps, soup kitchens and homeless shelters.

And the bums don't mind all of this so much, as they get a half hour or so of an air conditioned ride in a nice tour bus, all on the public dime.

Life's good if you are a bum. In the good old days, we had vagrancy laws - remember them? It used to be a crime to be a bum, now it's a life style.

Yes I do remember.

Here's a thought, just send them to the 'sanctuary cities', if they can sustain illegal aliens ? then certainly there is room for bums.

A socialist utopia it would seem.

Yeah, Christopher, great idea. We'll get all the bums a one-way ticket to Nancy Pelosi's district, the home of Rice-a-Roni (the San Francisco Treat).

Bums will like San Francisco; nice temperate weather, very comfortable Sleep Comfort beds in the shelters, super clean soup kitchens (perhaps we could call them bum bistros), and a very tolerant public from which to mooch.

You have to wonder, though: eventually, the public trough will dry up if we ship enough bums to SF. What will the good city council decide to do then, when they are overwhelmed with bums? Rationing? And who decides which bum gets what free hand out? And which bum goes hungry?

I'd love to watch THAT process in action.

Excellent advice. Give a bum money and he's just going to blow it on hooch or crack. We have soup kitchens in our town. Nobody goes hungry.

Liberals screech when they hear somebody say that, but then I ask, where are all the dead bums who died of starvation?

Yeah, where are those stacks of dead bum bodies, piled up like cord wood, fulfilling the pinko predictions of mass starvation?

Those pinkos are wrong about everything.

Fredd, I'm not sure if I remember this right, but wasn't Tommy Thompson's original idea to stop issuing welfare to able-bodied residents in just a few counties? I seem to remember the idea starting small, and then some goading from the Right caused the idea to be expanded to cover the whole state.

This was a problem when the economy was good, now it's beyond belief.

A few years ago I was working in downtown Salt Lake. A woman approached me with her sad story, so I offered her lunch from McDonald's, she refused wanting cash, I walked away. Later that night a guy was on the street corner with a sign. His phone rang and he pulled it out. It was much nicer than mine!

I don't remember the details, either, other than eventually Thompson made welfare to work the statewide program.

And I SPECIFICALLY remember the lefties and pinkos predicting widespread famine and death amoung the poor Wisconsin wretches that we dastardly, mean spirited conservatives were going to force into the harsh, cold streets with this program: that scenario never happened. Pinkos are always wrong - about everything. Absolutely everything.

Salt Lake City has by far the most bums I have ever been accosted by in any city, to include the Big Apple.

Those streets are so dang wide, that the bums have plenty of elbow room, so that perhaps two bums can properly work each corner, versus only one bum per corner on smaller streets.

Who knows. And those bums were aggressive, and I mean angry aggressive. This was in 1996 or so, perhaps the Salt Lake bums have mellowed since then.

And that lady demanding cash from you? Standard operating procedures for today's bum; those 'Will Work For Food' signs always get people to stop, and when the uninformed do-gooder takes them up on their offer, wanting snow shoveled or leaves rakes, today's professional bum will have nothing of that work stuff. Cash and carry, Trestin, cash and carry. Ignore that working for food stuff, that's just politics.

I have a solution, we feel all the bums to the bears!

This was a very funny post, Fredd, with lots of truth to it as well. I'd rather feed and house a homeless bear than an illegal alien any day.

Make it easier to be poor or homeless and you get more poor and homeless.

I'm all for sending them to California. But near near Opus's place.

Ah, just feed the bums to the bears. Good solution, but it begets another problem:

What do we call this newly offered bear food? If we process the bums and box them up, would the bears go for 'Bum-burger Helper?'

Or, perhaps the bear has a sweet tooth, and we sprinkle powdered sugar over the bums and singe them a bit with a propane torch, would the bears fancy a dessert of 'Bum-broulet?'

The whole dang world knows how easy our poor have it - they are all scrambling to get in and sign up for food stamps, welfare and free government cheese.

When we make our poor comfortable, in addition to taking the stigma out of being a comfortable sponging mooch, what should we expect? An avalanche of lying, shameless slugs and slobs who clammour for the freebies. Duh. What a perfect profession: do something that takes no skill or effort whatsoever other than just sticking your hand out. And demanding your freebies - as a RIGHT!

And of course get indignant and righteous if the freebies are late.

Might we equate bums with ALL of those on welfare who WILL NOT work because they know we will feed them?

Yes. Moochers are moochers, regardless of motus operandi.

great piece Fredd..thanks so much for the vis to WHT!..Have a super Sunday!!:)

I appreciate your usage of the word 'bumly', the urban dictionary has it wrong