Is anyone else tired of getting hit up by hippies to help save the planet? Anybody at all? They have been at it since the early 1970's at least, when in Oregon a bunch of liberal biologists opined that continued logging on federal forests would kill off the spotted owl, as their only habitat known to mankind was in the ancient old growth forests. 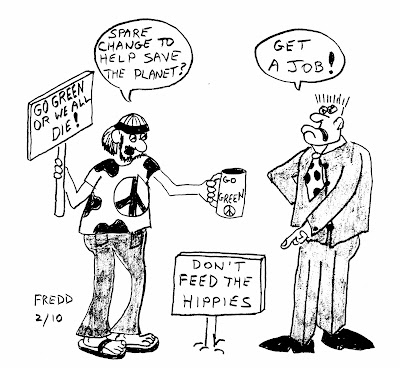 Hippies and liberals in general flocked to these ancient forests, chaining themselves to old growth Douglas fir trees, chanting 'save the spotted owl, we're all on this planet together'...etc.
.
Together, these liberals, hippies, bums and general malcontents persuaded the Environmental Protection Agency (EPA) to prohibit further logging, and the Bureau of Land Management subsequently halted all logging in federally controlled forests in Oregon. Which, unfortunately for the logging industry in the Great Northwest, meant that virtually half of the state was now off limits to logging.
.
Considering that Oregon at the time was a state whose entire economy was essentially based on logging and wood products and services, this was a disaster for working families in Oregon, and unemployment soared within a year to 25% or more, with teen unemployment nearly 75%. While the liberal tree huggers in Oregon (where this moniker was born) were ecstatic at the news, much of the workforce in Oregon left for other parts of the U.S., seeking employment that was simply nonexistent in the Beaver state. Your author Fredd here was one of those displaced workers, who had to choose between either starving or going elsewhere for employment.
.
I had a bad taste in my mouth for all things green ever since. Nothing these green idiots touches ever enriches anybody's lives, to include their own, other than the smug smirk on their faces because they were able to 'stick it to the man.' Owing to the huge success of throwing Oregon's economy into the toilet, the liberals had gained valuable experience as to how to throw many more wrenches into capitalism. The playbook was written, and it works every time. Find some obscure slug, worm, insect or other parasite or vermin, arbitrarily declare that capitalism and private property rights in its environment will cause the vermin's extinction, and presto chango: more havoc wreaked upon the local economy whose only crime was, well, living life.
.
And they are hard at work today, seeking other economies to wreck, and with this proposed cap and trade bill, they will have reached their Nirvanna: wreck the U.S. economy. The liberal basis in their quest to destroy our way of life is the same as it was in Oregon lo these many decades ago: a false and bogus assertion that we are destroying the planet, this time by that dreadful poison carbon dioxide.
.
And what of their bogeyman of decades ago in Oregon, the meanie loggers who threatened the world's only known habitat of the spotted owl? Logging has changed considerably since those long forgotten times, and has scaled down to proportions almost unrecognizable from their glory days. And that precarious existence of the spotted owl? It turns out that this creature can live almost anywhere, and not just within the confines of ancient old growth forests, as photos have been taken of a pair of spotted owls nesting in the neon "K" of a suburban K-Mart sign.
.
My advice to anyone who feels pressure to buy a Prius, recycle all manner of garbage, and in general reduce their carbon footprint: tell the hippie applying the pressure and pushing this bogus crap to get a job.
Posted by Fredd at 9:23 AM

This is what happens to people who quite believing in God. They just start making crap up to fill the void

Silver: I think Gaia is their god. And Gaia doesn't have much use for people.

Kid, it's been a while, but I have seen this one before, shortly after the Hippie Dippie Weatherman's death a year or two ago.

How do you insert a clip like this, Kid? I tried to highlight the link, copy and paste, but no go.

Fredd. 1st off, make a post on your blogger site, cut and paste a link from your address bar, and hit the little green icon with the chain picture and paste the link in the input box that comes up. I think you've put links in your posts before..

Anwway, after you have it in there switch from the Compose window to the HTML window and you'll see how that link is configured. Good reference until it becomes second nature..
But here it is. There are two characters I can't actually type in because when I post my comment it will be translated into HTML and won't appear. Those two characters are the left and right angle brackets, above the comma and period on the keyboard in the shift position.

So, I'll just spell those out. To make a link to yahoo.com for example, with the clickable text that says "Hi Fredd", you enter:

So if I use parentheses instead of angle brackets it looks like this
(a href="www.yahoo.com" )Hi Fredd(/a)

All the hippy-dippy enviro-nuts are hiding behind a convenient facade. Time to stop hiding behind it and face the real world, kiddies!

No need to come out into the open with their agenda, because it's still a cash cow for them. Simply point the finger arbitrarily at a straw man enemy (or threaten to, the ol' shake down tactics work well here also), create a stir to which they summon their cult like followers to rally behind, generate some donations to 'help save the _____), and of course they will be doing all of the accounting work and keeping the books. The followers, well, they are not as good at the brain-stuff, you see.

For the leaders, it's a business, nothing more, nothing less. In the recess of the leaders' brains, they probably know they are no more noble than the latest Elmer Gantry wannabes, but like all great liars, eventually they believe their lies because they repeat them so often, and the lies become truth. Goebbels had that down to a science, these guys don't need to re-invent the wheel.

What would you call people like these, Pasadena - rotten? Evil? Their followers are simply stupid, but the leaders, I wonder which category they fall into.

I try to consume as much as possible, and don't buy anything "green". It's all a crazy plot. I don't like hippies, they tend to have aversions to soap and water! Cool post Fredd!

PS: I'm glad you voted too, but as we know, In IL, it's hopeless. Maybe by Nov. Alexi will be indicted along w/ his buddy blago, and the pawnbroker who roughs up women w/ knives to their throats will have dropped out. I don't think Bammy will dare come here and stomp for them, he'll step in something stinky ;-)

I am not sure why hippies hate soap and water, perhaps they think that their natural stench brings them closer to Gaia. I dunno, and I don't care.

Illinois: I am constantly amazed that none of the political sleaze here has rubbed off on significantly on Obama. I am puzzled, because he emerged from the filthy political ooze right here in the Windy City, took a lot of his ooze-dripping buddies with him to Washington (Rahm, being one of the ooz-iest, is in the hot seat now for his F'ing Retarded comment). Everybody in the entire nation knows how Chicago thug politics works, and somehow Obama comes off as somehow pure and clean as the wind driven snow. Quite a neat trick, I must admit.

I think you are right, Bunni, Obama is going to avoid stumping in Chicago like hippies avoid soap and water.

One of those under-the-overpass beggers was down by I-75 holding a sign that said: Save the woods from the homeless, buy me lunch.

Lunch, eh? I would bet against that. Assuming someone approached this guy and took him up on his sign, he would want the money, not a ride to the restaurant.

Clever sign, but lunch is the last thing on the bum's mind. He wants beer. Or vodka. Or perhaps some smokes. If that bleeding heart insisted on taking him to lunch rather than just fork over some scratch, he would likely just tell them to f... off.

Joe - The bums sell everything they have for booze and drugs. They get fed at charity joints, get new clothes (sell them too) at other charity joints or are on SSI and collect about $800-900 a month - and still go for all the free goodies. Some of these bums are carrying two or three hundred in cash when they hit you up at the intersection.

Sig94's right. These bums can get food all over the place for free. Just mosey on over to the Salvation Army soup kitchen, pull up a stool and make yourself at home. Maybe even gripe about the gravy being too lumpy.

Or, if they get tired of the preachin' and soul savin' going on over at the Sal, they can find another freebie elsewhere, food is not a problem for these guys: vice products are unavailable at the Sal and through the gubmint. For those items, they gotta have cold hard cash.

And a sign that says 'I need drugs and booze. Please help, the Salvation Army won't' is unlikely to garner much sympathy.

The bums get SSI benefit cards that only let them take out so much at a time, otherwise they'd OD on all the crap they imbibe for jollies.

The County welfare people used to assign them legal guardians to dole out the cash do they wouldn't kill themselves.

Sig: maybe we should start letting the bums manage their own intake, perhaps more than a few will choose to remove themselves from the gene pool.

(right, like they're not ALREADY disqualified from breeding if though nothing else than hygiene issues)

Give the spin-doctors time and rope and watch the fun.

I hate spin doctors, except the ones that did 'Little Miss Can't Be Wrong,I like those guys.