How to tell if you are a Liberal or a Conservative 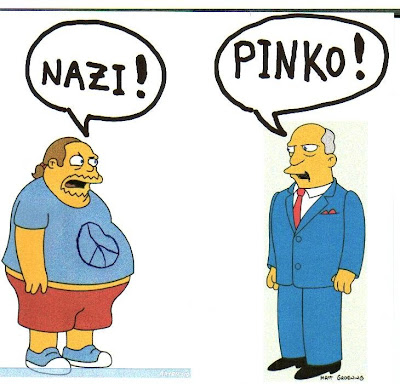 Do you wonder where you stand on the political scale? Are you so far left that Obama actually got his health care message through to you, or do you fall somewhere to the right of Ghengis Khan?
Fear not, I am here to help you find out whether you should register as a Democrat or a Republican: just answer the following questions truthfully by circling either A or B:
1. If you are asked for money from a scuzzy bum on the sidewalk, you:
A: Tell him to get a job.
B: Empty your wallet into his filthy fingers.
2. When President Obama appears on your television to give his 788th speech on health care reform, you:
A: Throw a brick through the TV screen.
B: Listen with rapt attention for important additional information on the issue.
3. If you find out that you and your spouse are expecting a baby, you:
A: Celebrate the joyous news.
B: Race to the abortion clinic to remove the unwanted fetal tissue from your body.
4. When asked by a pollster what you expect from government, you:
A: Tell the pollster you want absolutely nothing from the feds except a body count of dead terrorists.
B: Tell the pollster you want security and the fulfillment of any want or need from the time you are born to the moment of your death. 5. When the same pollster asks you your thoughts about unions, you tell them:
A: Unions are bloodsucking parasites on capitalism.
B: Unions help promote paradise on earth.
6. Ronald Reagan was:
A: the greatest president of our times.
B: the dunciest dunce to ever come out of Dunceville.
7. Kelo vs New London is:
A: a SCOTUS decision trampling our rights to hold private property.
B: some kind of new Little Debbie snack cake.
8. Teddy Kennedy was:
A: a murdering coward who left a girl for dead in a submerged car he drunkenly wrecked.
B: the greatest senator of our time.
9. President Obama has proposed taxing big banks. You think:
A: that Obama is an idiot who has no clue about how commerce works, and just wants a new bad guy to demonize, just like Saul Alinsky taught him.
B: that this is a good move, to penalize those fat cat bankers who have bags and bags full of ill gotten money laying around doing nothing anyway.
10. When asked if you want to join the neighborhood recycling drive, you:
A: tell them that recycling is a pointy headed liberal concoction that doesn't work, and you point to the sign in your yard that states "Don't Feed The Hippies."
B: jump up and down shouting 'oh goody goody goody, I can help save the planet.'
SCORING:
Count the number of "A" answers you circled, and match this number to the scale below:
10 A's: You are definitely conservative material, welcome to reality. Register as a Republican.
7 - 9 A's: You need some work, but have potential to wake up from your dream world. Register as a Republican.
6 A's or less: you are a Birkenstock wearing, bean sprout and tofu eating, pony tail sporting, Ted Kennedy loving, tree hugging socialist loser. Please don't take your insane notions of utopia out on the rest of us at the ballot box. Stay home during the next election.
.
.
.
* Please note the irony in my use of the Simpsons characters above: The Comic Book Guy, while on the surface appears to be a pony-tail wearing, peace sign T-shirt donning liberal, is in fact a small business owner who is the target of the Obama administration via tax hikes and oppressive regulations. Superintendent Chalmers, on the other hand, while displaying his sartorial splendor in his three piece suit appears to be the consummate conservative, he is in fact the head honcho of the Springfield School District, a card carrying union member of the NEA and in all probability votes Democrat straight down the line. To actually use arch conservative Montgomery Burns as my icon of a conservative would be to diminish my point. I considered it, but gave the nod to 'Chalmy' as my conservative stalwart.
Posted by Fredd at 8:56 AM

TKZ: yeah, I'll give it to you. I would have put 'kick him a couple o' times' option, but that would have been too easy.

Tangential to this subject (sorry to hijack the thread), you will note that the Dux were victorious over a slumbering UCLA team FOR THE LAST TIME on MAC court.

I presume that MAC court is going under the wrecking ball after the season?

LOL! Thanks!!! I don't really want to be associated with the Jackass Party, even if only by 1/2 a point.

I have not been paying much attention to the Duck basketball program this year, as they lost early to the likes of a bunch of nobodies, even though they have beaten a few ranked teams (the Huskies in Seattle, for one), as I have been much more interested in Duck football.

Mac Court (aka 'the Pit'): yes, this old ramshackle shed has been a candidate for the wrecking ball for most of my lifetime. I used to sign up for all my U. of Oregon classes on the main floor before computers came along, attended quite a few men's games there, and on occasion would play pick up rat ball from time to time in my youth on the main floor.

Now the son of Phil Knight (Nike poobah), Matthew Knight, will have the new facility named after him. I have yet to see a Duck win over UCLA, and now it looks like I never will.

I made a hundred, or zero, depending on how one looks at it.

Linda: how many other test takers you think got straight A's? You would think EVERYBODY, right?

Nope, still a lot of tree hugging, tofu eating commies out there. Too many, if you ask me.

1) I read your stuff, and I know that you scored 100, whereas many of Silverfiddle's adversarial commenters would give you a zero.

2) Read your two panel cartoon idea, and it would take me perhaps an hour to do it. Typically I limit myself to 30 minutes, or one panel. I'll draft something in the near future and post it on your site, and you can take it from there.

Yeah, #2 A would be troubling for me to follow through with on our Sony Bravia 46" HD 1080p LCD screen. I love that thing.

I think it would be OK to simply contemplate doing it, and then answer "A."

heheheh. I scored 11 because I also laughed at the idiot Al Gore as I flushed his 1.6 gpm wonder-commode, at least 3 times once again this morning, using 4.8 gallons of water instead of the 2.8 I would have otherwise used with my 3 gpm version of prior home enviornments that I adjusted the tank water height down a touch to conserve water. Not any more AL you moron!
((((((Flushhhhh))))))) There ya go Al - 6.4 gallons down the drain you waste of flesh.

PS - I also have the Sony Bravia 46. Best picture out there.

Fredd! This was a great post and hilarious. I guess I don't have to tell you I answered A for every single question! Have a fun weekend.

Funny stuff, Fredd! I went skiing last Friday to celebrate the first day off I've had in awhile, and as I was leaving, a bum with a board asked if he could have my pass, which was good for about 2 more hours.

He actually looked surprised when I told him "Hell No!" and kept walking.

So let's see... I don't feed the hippies, I read Fredd Sez... I must be a mean, selfish conservative!

Silverfiddle: you get it. You feed one lousy hippie, and the next thing you know, there are 50 lousy hippies sticking their filthy hands out to you, expecting more.

You tell them to get lost, and all those rejected hippies start bad mouthing you when you simultaneously point at your yard sign that says 'Dont Feed the Hippies.'

What amazed me about your comment is that, although I just put my skiis on eBay last week since I hadn't used them in 14 years, I know how much it costs to go skiing. Skiing is not the sport of poor hippies. Skiing and golf. And boating. And don't forget polo. For this bum to try and mooch the remainder of your ski pass shows just how rich the poor people of this country are these days.

Bunni: no, you need not submit your score sheet. All the folks on my blogroll are members of the Choir to which I spew my poisonous, conservative venom, so I feel confident as to how you did.

You have yourself a great weekend, too, and remember: 'don't feed the hippies.'

In August, our Sony Bravia set will be three years old. I still marvel at our HD reception, and wonder how I ever made it through the day with that blurry old standard def.

Especially watching Bears, Cubs and Oregon Duck games, you can see the individual blades of grass on the field, and each and every pimple on Jay Cutler's face. Of course, since you are a Bravia guy too, you know this.

The Kid's 11th 'A' was pointing out how contradictory Al Gore's green idiocy is to real life.

Out of curiosity, what's yours?

My eleventh was going to be:

You saw Obama's mouth moving. As a result you:

A) Believe that President BO is the most amateurish, sophomoric imitation leader this country has ever seen or imagined.

B) He's a Harvard graduate. He must be the smartest man on earth.

Chick: yes, this test was a piece o' cake for people with brains.

Toughest test in the world for liberals, and even an all night cram session would not help their score.

Your Posts = LMAO. Glad I found your blog, ill be by to check it frequently.