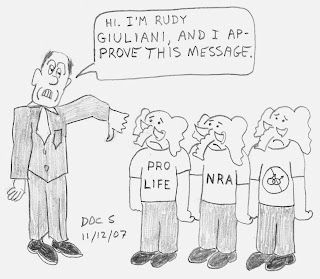 Rudy is the front runner, if you believe the polls that 'Red Charlie' Gibson trots out about every other evening. And the Left would just love it if Rudy Guiliani got the GOP nod. In this event, the issues would not be pro life vs pro-death, whether to grab guns or not, or whether gay marriage should be the law of the land. No, the issues on the campaign going forward would be A) How best to protect Roe v. Wade, B) how BEST to grab our guns, and C) how SOON we can make gay marriage a part of our social fabric.But these debates are simply not going to happen. The primaries will certainly get spirited, but Rudy is not going to be the GOP candidate whom the base is all excited about. Once the primaries dip below the Mason Dixon line, Rudy's time in the sun will fade to twilight. Conservatives do not vote for liberals in their own GOP primaries. Especially in the South. And Rudy is a liberal. He will be packing his bags right after South Carolina is done with him, just like in 2000, when that scamp, "Maverick" Sen. John McCain took a thumpin' after the primary votes were counted. Ditto this primary season, when we can stick a fork in Rudy after South Carolina, he will be done. And the rest of us can get on in picking the REAL nominee.
Posted by Fredd at 7:24 AM

Now that a few years have passed, those elephants are not as sad, and Guiliani is not the presumptive nominee (remember those days?).