I don't put a lot of faith in polls, especially polls sponsored by left-leaning pollsters such as Quinnipiac,  ABC, NBC, CNN, etc.  They all were indicating a Hillary Clinton landslide in 2016 virtually up to election day, and all of these guys are still saying that the Dems will kick butt in a few weeks.

We shall see.  If the polls stick to their guns and predict a huge Biden win, and then Trump rolls to an electoral college landslide, their credibility will drop to virtually the same as a steaming pile of dog excrement. 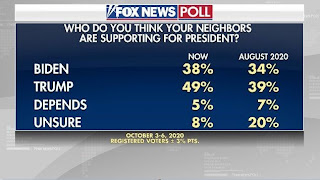 2016 the Dems were confident they had it in the bag. they won't be complaisant this election. Every dirt trick in the book, and some newly invented ones, will be used to steal the election, IMO. The Trump supporters best not fall into their own complacency.

My neighbors (such as they are) are all voting for President Trump and his efforts to keep America great. None of them are socialist freeloaders, or the idle elite.

Fool: the Dems never seem to learn that dirty tricks are something voters do not like. ANd they don't seem to learn any lessons, so I don't know that I would agree this time around. They are going to their old play book. Again.

LL: it's kinda nice, being around beet red ilk. Then there's those Phoenix folk...

I could say the same thing, my neighbors are all GOP, but those Chicago folk...

I see 3 Biden flags in my neighborhood of 110 houses. I see no Trump Flags, BUT I see almost 75 American Flags. Trump in a landslide!

Same thing was going on in 2016: Trump getting clobbered in the polls, but his rallies were yooge, and Hillary couldn't pay anybody to show up at hers.

All my neighbors are Trumpites except for the florist, "Elrond," and he might vote Trump too. Like Brandon Straka, who used to cut hair in Chicago or somewhere. And there's Trump flags everywhere, unlike last time, in this traditionally Dem small southern town.

Maybe people are fed up with the awesome Dem electoral strategy of no borders, higher taxes and burn your city down? Hope so.

And they'll come back with the same steaming pile of BS for the next election. Could be a fair amount of kids voting this time that were 14 at the last election. Sucker born every minute.

Padre: I can't imagine that those precious independents who don't know how to pour piss out of a boot can be convinced that hatred of Donald Trump is more important than watching your town burn to the ground.

Counting on kids of voting age to vote is like betting the farm that a sumo wrestler heads to the salad bar first rather than straight to the carved rack of ribeye at Golden Corral.

A bad bet, very bad bet. Kids just don't vote. They mouth off to any pollster or camera, but getting their lazy butts out to the polls? Nah. It has never happened.

You could easily be right Fredd, but we have noticed the teachers and retarded parents getting their kids involved in all this crap at very early ages..

Most people evolve with age and experience. Even though these kids are brainwashed at an early age, eventually the get jobs and see the kinds of deductions to their paychecks and wonder who voted for that?

Some never evolve, but most do. And it's still an axiom of politics; young people have other things to attend to when it comes time to do their civic duty and vote. Parties, sleeping, hanging out with their friends, etc. They just don't show up at the polls until they are 35, when they have seen huge chunkcs of their paychecks constantly getting swiped by the government.

Then they vote. And more often than not, they vote against paycheck erosion.

Well, Dr. Fredd, we were given a right shakedown.

The fight continues, and whoever said it'd be easy? I don't recall anyone trustworthy ever saying that.

Hi, Fredd...I REALLY thought that "my neighbor supports Trump" was the key. I KNEW Trump was going to win when I read that because what I believe it really was saying "I'm voting Trump but I'm not going to TALK about it with an interviewer because I know you probably hate him!"

I thought Kid was right and more kids would vote simply because they hated Trump so much....although I know a fair amount of even high schoolers who like him.......I'm thinking those kids on the streets, black and white, as BLM and ANTIFA don't vote...they're too busy going from town to town to make their Soros-protest money.

Z: Sidney Powell, Trump's attorney in this election theft, says Trump won by a landslide. I think that as well. How the Democrats can brazenly cheat like this and get away with it is mind boggling. How they can undermine Trump for 4 straight years and suffer no ill affect, also Gob Smacking. My faith in the federal and state governments has never been lower. My fear of the IRS has never been higher. Ditto for the FBI, CIA and NSA, all to be feared by citizens, they are not on our side any longer. How long it has been that way, I am not sure, but it's now been awhile.

We live in a Banana Republic. There's no other way to look at all of this.

Padre: yes, we suffered a beat down that is one for the record books. They cheated us blind, and there's no recourse. We have to start cheating as well, if we are ever to compete in the arena of ideas again and win.

Sad to say. We live in a Banana Republic.