Free stuff for everybody! It's appeal is limited.... 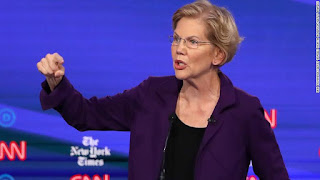 If you have been listening to what all of the Democratic contenders for the nomination for president are shouting from the mountain tops, it all boils down to a basic, fundamental message: "if you vote for me, I will enact legislation to transfer other people's wealth to you."

No, of course they don't put it exactly that way, but there is no other possible understanding of what they propose than this essential philosophical tenet of socialism: spread the wealth around.  And in order to spread wealth, you have to take it from those who have more and give it to those who have less.  Duh.

Our political system protects anything you say on the stump, regardless whether it's true or not, doesn't matter: political speech is protected in this country.  Scalawags of all kinds know this, and accordingly will say absolutely anything that sounds good to their potential constituents.  If in the end after all the ballots are counted, they wind up with 50.000000001 percent of the votes, that's all that matters.  They win.

And who doesn't like free stuff?  I like free stuff.  You like free stuff, everybody likes free stuff.  Unfortunately, nothing on earth is free; somebody pays for it, that's just the way it works.  If you don't pay for whatever you got, then it's free.  Free to you.  But it wasn't free to whomever got stuck with the tab.

This drives me crazy, the fact that a lot of people listening to these socialist politicians believe it.  The ignorant among us, they really do.  But thankfully, there are also those listening to these messages that know how this country works: people put forth effort that others value, and they are rewarded with the fruits of their labor.  If their labor is less valued than other's labor, they get less fruit.  Conversely, if their labor is more valued than the next guy's, then they get more fruit.  It cannot be explained any plainer than that.

I was listening to Dean Cain (who portrayed Superman on the old series 'Lois and Clark' which ran on ABC from 1993 to 1997), now turned broadcast personality, while he was on location in Red Lake, Minnesota this Super Tuesday morning asking a young woman who she was supporting and why.

"I am supporting Elizabeth Warren, because she is fighting for economic justice.  People are frustrated that they see the stock market going up and up, and yet this wealth has no impact on their day to day pay checks.  It's just not right, and Elizabeth Warren will fix that."  I paraphrase her answer here, but that is the jist of what she truly believes.

This young woman basically believes that the gains in the stock market should be shared among the proletarians, with no consideration as to who has skin in the game.  Free stuff for everybody, that's only fair.  No thought is given to stock holders, who worked for that investment money that they risk in the market, no thought whatsoever ("you didn't build that!!").  And what about when the market goes down?  Does this woman think that those paychecks of her ilk should be exempt from those losses?  I think she does.

And Pochahontas, Bernie, Slow Joe, and every other Democrat in the field (maybe not so much Mini Mike, he sort of gets it but not really), they all tout Medicare for all (free health care), free college tuition, forgiveness for all student debt (more free college), $15.00 minimum wage (free wages for work that is not worth $15.00/hour), and lots of other free stuff.

The rub is that none, and I mean NONE of this stuff is free.  Somebody pays for all of it, every damn penny of it has to be paid for by somebody: doctors and nurses don't work for free, they get paid, and do not give away their talents, health care is not free.  $15.00/hour for $5.00 worth of work does not mean that they get free $10 bucks an hour.  The employer pays that, again, not free.  Lenders forked out big bucks to college students in the forms of loans, which they expect a return, they didn't loan out 'free money' to these kids, it was real money and this real money is not an entitlement to these college kids who signed those papers.  College professors, and their heated/air conditioned classrooms cost money, none of that stuff is free.  Somebody paid for all of that, not free by any means.

For these politicians to stand on their stumps and promise free stuff to everybody only resonates with some; those who don't have stuff.  The other people listening have stuff, and know that these politicians have painted targets on their backs as chumps whose stuff they will confiscate.  The appeal of free stuff is limited only to those who believe in unicorns frolicking in meadows filled with rainbows and gum drops, and that there should never be a tear drop in any eye ever.

The rest of us know that only elbow grease generates stuff.  And elbow grease ain't free, never has been and never will be, and we also know that there ain't no unicorns frolicking in idylic meadows, and we have seen a lot of tears in a lot of eyes, that's life in the Big City.

A pox on these politicians who are promising to take stuff from one group and give it to another in exchange for their vote.  An oozing, pus dripping pox.

And the "rich" people they take stuff from won't include their class of people. Just you and me and people like us.

Example: Mike Bloomberg is hell bent on taking guns away from us. He says that ordinary people are too stupid and undisciplined to own firearms, since he was that way when he was 19 years old. He says that the police are the ones to protect you from crime.

Of course, he has battalions of body guards around him and his mansions 24/7, all armed to the teeth. Why the need for all that fire power, Mini Mike? The police will protect you, right? Shut up, says Mike, I'm too important to risk exposure to criminals, unlike you.

I think we get what they think of us.

I did e-mail the Bloomberg campaign and promised my vote IF they'd deliver a brand new, 2020 Rolls Royce Zenith with a Bohemian Red with Black Diamond exterior and consort red with black interior - before the vote. That's just the primary vote. I haven't heard back from the campaign but I fully expect that they'll drop it before I need to vote.

That's how you do it, Fredd. You need to as specific with your ordering as you do with your poxing. The retail price on the car is $459,800 and I expect that Bloomberg Inc. will cover my insurance and kick in a credit card for fuel and maintenance.

Hmmmm. Sounds like you have it figured out, LL. Specific poxing - and here I have been just spewing poxes willy nilly. Boy, did I have it all wrong. Who knew?

I wouldn't mind a fully restored 1974 Lamborghini Countach, do I just email Mini Mike? Then again, I suppose he might take offense at that moniker, I'll just use Mr. Bloomberg.

There you go Fredd, being all logical in an illogical world!

Bloomie's Boys should get back to me at any moment. Of course, I'm not home, I'm in Hawaii, hanging out on the beach. It's snowed at the White Wolf Mine yesterday. And I was tired of snow, so relocated for a while. It's nice weather in Hawaii, and even though I'm in a suite on the beach, I feel for people such as yourself, who are battling the cold.

"I'm not gonna have to pay my Mortgage! I'mm not going to have to put gas in my car !!"

Well, the black folks who contributed to the lowest unemployment number for black folks Ever are happy to leave the free stuff line and move to the chance to make my life better line.

LL: yes, I hear Oahu is nice this time of year. And every time of year. Bloomberg may not get back to you right away, he's busy counting up all of his delegates that he's bought and paid for. Current count: 0. Not the best ROI I've ever seen. Actually this could be the worst ROI I have seen, other than Obama's bet on Solyndra.

Kid: and no need to buy groceries to put in your fridge. Or buy toys for your grand kids, naw, that's in the past. Just vote for Bernie, and all of that shit is free.

Doc: as I mentioned earlier, everything I wrote above should be summed up by one word: 'duh.'

"unicorns frolicking in meadows filled with rainbows and gum drops."

A pox on the dam unicorn horde.

Whoa, there Padre! A man of the cloth poxing things? Doesn't seem right...that's MY turf.

Z: yes, I got lots of poxing left in me. And as for Pochahontas, I am pleased that she crashed and burned in the primaries, she is indeed an awful example of a senator, or even a human being for that matter. A lyin', fraud of a fiend.