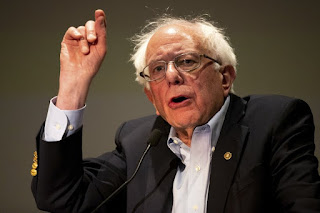 Bernie Sanders (I-Vt) just gave a speech at Georgetown University in which he espoused a number of 'rights:'

1.  Medicare for all - health care should be a right, and not a privilege, according to Bernie and all leftists.

3.  Everybody has a right to free higher education.

I think he listed a few more 'rights', but these three are the ones I recall him blathering about.  If you ask me, a 'right' that is granted to you shouldn't cost me anything, because I should have a right to keep the money I earned.  Sounds reasonable, right?

The Bill of Rights (1st ten Amendments to the Constitution) are all granted to U.S. citizens and don't cost other citizens anything at all: the right to bear arms is just that; that doesn't mean that you are granted the right to have a free firearm given to you.  The right to practice freely whatever religion you choose, that's also in the Bill of Rights, but that does not mean I must be forced to build you a church so that you can practice your freedom of religion.

These 'Rights' that Bernie says we all should have are not rights, or at least not the definition of a right that the Founding Fathers had in mind when they set up our system of government.  These rights of Bernie cost a lot of money to somebody other than the holder of the 'right.'

A right of free college sounds good, but college costs big bucks, and if that right is granted to somebody, someone else pays for it, namely the taxpayer.  And when taxpayers are forced to fund free stuff for others, that's called theft and it's nowhere near considered a 'right.'

The 'right' to make a minimum of $15/hour, sounds pretty good.  But that is not a right, if employers are required to fund a position that is worth $7/hour to them, then they are being squeezed by an additional $8/hour per 'right holding employee.'  Notice that McDonald's and other fast food establishments may be forced to pay a minimum wage, but as of yet they are not forced to hire anybody if they choose not to: kiosks are starting to pop up in these restaurants, which require only an initial capital investment, and subsequent ZERO wages afterwards.  The effect of this 'right' to make $15/hour winds up granting the 'right holder' an effective wage of $0.00/hour, when his job is automated.

Bernie's Bill of Rights sounds good to free loaders, sponges and ne-er-do-wells.  But to the rest of us, it just sounds like re-packaged socialism in a box called 'rights.'
Posted by Fredd at 9:23 AM

Bernie (a life long communist and devoted fan of the defunct Soviet Union) is not going to sell two of his mansions and give the proceeds to the poor. That's not what communist apparatchiki do. Bernie asserts that his brand of socialism is "democratic" (in the way that East Germany was the German Democratic Republic). The appeal of looting a rich man is as old as time itself. Hitler looted the rich jews through the National Socialist Worker's Party (Nazi).

Will America fall for it? Mitt Romney correctly said that only about 47% of Americans pay federal income tax. The rest ride on the coat tails of that 47% for their free cheese. Socialism offers people a vehicle to steal - until the businesses close and farmers stop GIVING their produce away and you end up with Venezuela.

Different political outlook, but Bernie is the Left's Ross Perot.

Fool: so, Bernie is going to raise the hood on the US economy and look around? The difference between Perot and Bernie is that Perot was mostly spot on about the economy (remember 'giant sucking sound if NAFTA passes?" And then a giant sucking sound actually happened. Bernie wouldn't know a demand and supply curve if they bit him in the buttocks, he is truly clueless on economics, an absolute economic imbecile.

LL: Bernie's got two spare mansions? How did that happen on a senator's salary? Oh, that's right: his wife looted a university up there for a few million bucks, that'll help pay the salary of the maid, the butler, those yacht payments, etc., you know, the everyday expenses facing the middle class folk like Bernie.

Fredd, democrats can foul up a wet dream. Socialsts are so stupid they can't even do simple math or look around the world and see how those programs work. 12,000 millionaires moved out of France in 2017 and that's been happening a while and will probably pick up. The Laffer curve is a pretty simple thing.

Kid: I think that most folks that pine for socialism are simply dreamers; that philosophy sounds great on paper, and even though examples of its failures when implemented are 100% so far, they figure that if the right people are in charge, Utopia is sure to result.

I can dream, too. But after awhile, dreaming is just that - dreaming. You actually have to live in the real world, and that's the rub with socialism. Free riders, mainly, those who will game the system because people are people, and these dreamers never calculate the numbers of people who will fuck things up for everyone else.

That's why socialism will fail every time: humans are involved.

Fredd, it's a bit like the rainbow movement. Just as there's a new gender or initial to add to the LGBTQIRS alphabet soup every time you turn around, so there's a new "right" to something. Which, as you point out, costs someone else cash they've worked for.

But if everything good is yours by some kind of "right" what are we left with? A gang of shrieking, satan possessed, spoiled brat, narcissist, monstrously entitled child savages. And with that, no rights at all.

Everything the Left proposes produces the exact opposite of its intended result.

Pastor: well said. If everything becomes a right, we will have no rights at all.

And that gang of shrieking, satan possessed, etc. folk all seem to be running for the Democrat nomination for president currently (or serving as speaker of the house or as minority leader of the senate...).

Oh, and I forgot AOC, she gets a category of wickedness all to herself.

AOC is a fascist genocidal maniac and she doesn't even know it.

Kid: yeah, all of that, but I hear she can whip up a mean Harvey Wallbanger.
\
And a Test Tube Baby, upon special request.

Fredd, What is (kinda) amazing to me is none of these morons have connected the dots and realized that ANGRY PEOPLE DON'T WIN ELECTIONS. A good thing.

Kid: we'll see, I tend to agree with you. What amazed me last night at the moron's convention (the Dem debate) when asked to see a show of hands on who would provide free health care to illegal aliens, every damn one of them raised their hands.

The question could have been more aptly phrased 'who among you doesn't want to be elected in 2020?'

Do voting Americans want to dole out our tax money to criminals? Yes or no. I would think that answer would be a resounding 'negatory.'