My, how things change...and then again, how they don't 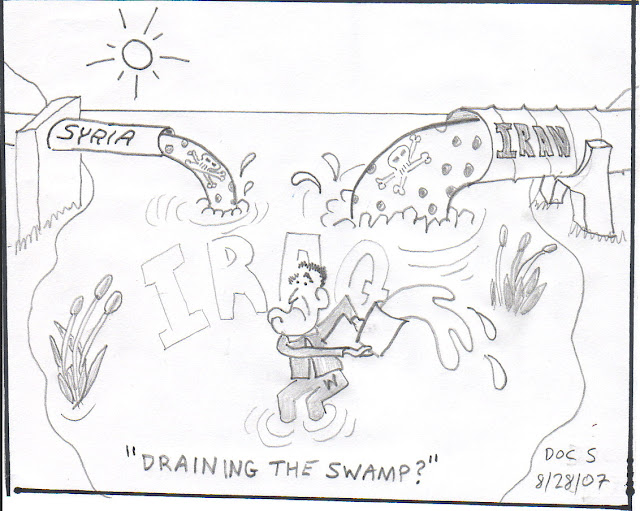 I drew this political cartoon over 9 years ago, (under my former nom de plume 'Doc S') at the height of the Iraq war 'surge,' which at the time was highly criticized by every sitting Democrat (Hillary Clinton and Barack Obama among them).  President George W. Bush sent 20,000 additional U.S. troops to this 'swamp' in 2007 to tamp out hot spots of terrorists, insurgents, Sadaam Hussein's scattered but persistent Baathists, and the upstart of what was later to become known as ISIS, led by at the time a young and charismatic jihadi named Abu Musab al-Zarqawi.  My take of these efforts at the time as you can see by my drawing above was of the dubious success of continued blood and treasure poured into this swamp, and has later been proven incorrect. Oh well, nobody bats 1.000, not even me.

Virtually everybody in retrospect agrees, to include both Obama and Hillary Clinton, that the surge was a success, and that al-Qaeda and its affiliates had lost virtually all influence in the region.  The U.S. had this war won. This Iraq surge was so successful, that Obama in 2011 declared that the U.S. involvement in Iraq was concluded, they were a stable, sovereign country, and that no U.S. troops....none whatsoever, to the consternation of every military mind at the Pentagon...were needed going forward.

Now, virtually everybody in retrospect agrees, with the exception of Obama and Hillary Clinton, that his pull out was a disaster of epic proportions, created a power vacuum which has been filled by terrorists and general undesirables from Iran, Syria and other rogue nations and has directly led to the establishment of the world-wide scourge of ISIS as is constituted today.

My, how things change over the course of 9 years.  And then again, how little they change.  Iran and Syria (or what's left of Syria) continue to pump poison into Iraq swamp, and now that Dubya has left the building, seemingly nobody is trying to bail out this swamp.

And the swamp has spread from where it was contained within Iraq to Yemen, Libya, Egypt, Turkey, and now many parts of Europe.

And now we want to hand the title of Commander in Chief to one of the main architects of this spreading swamp?

I believe this was all done on purpose to create chaos, not only in the Middle East, but also to Europe and now the United States.

Adrienne: a conspiracy to create chaos, with the conspirators intent on rising above the tumult to reign over what's left? That was Charles Manson's half-baked plan, you know.

Not one for conspiracy theories, I would posit that these leftist dolts just are not all that smart, despite what they would have everyone else believe. They act stupidly, thinking that because of their intellect things will simply work out because they would like them to. And when things go to shit, they blame others for the execution of their brilliant plan, and down play the opinion of those who suggest that it was the plan itself, and the flawed philosophy behind the plan.

Fredd, you're right, they're just not that smart. It wasn't a conspiracy that led to ISIS, it was incompetence, ignorance and complacence. One can make the same case for the Taliban and Osama bin Laden, who filled the void that the US allowed to form after the Soviets left. "We won that war". But we had to come back and it was much worse.

A big part of me loves fighting because of all that it means. Adrenalin, being out with the guys, struggle, thumping the enemy, cool military toys, demo, marksmanship against a wily target, etc. However, when I shut down the testosterone (in a metaphorical sense), I know war for what it is, and it's not pretty. There is one thing worse than fighting a war and that is LOSING THE WAR.

Progs don't understand that, because progs are never in the war zone unless it's 'Hillary dodging sniper fire'.

Personally, I'm all for conspiracy theories. Many are only half-true as presented, but that also means that half IS true. I believe there is only ONE overpowering conspiracy, and if you choose not to paint Satan at its head, then you can draw in the Rothschilds. There ARE, however, many smaller conspiracies, many of which have similar goals and sometimes work in unplanned conjunction with one another, while other times working against one another. Bottom line - the world is full of evil people with evil plans.

Gorges: can't argue with your bottom line, the world is LOUSY with evil people, and they NEVER stop planning, ever.

LL: yes, I get all of that brothers in arms stuff, it's what makes us alive. And then once civility reigns, we have to put that testosterone driven violence on the back burner. But it never goes away, as we all know that evil will come knocking on all of our doors again. And again.

Fredd, With all due respect, I view the entire ME operation as going into a slum house, stamping out some number of cockroaches who the other cockroaches could care less about and will easily be replaced by more cockroaches, then leaving. Whether we left 2010 or 2070, it makes no difference, (outside of throwing valuable American lives and limbs all for not at the situation between 2010 and 2070)

The cancer of islam lives on. Unless you kill them all and burn every koran on the face of the planet, every life or limb lost there was a complete waste of time. And Afghanistan? More than a waste of time, lives, and limbs.

Kid: I agree, it's either us or them. There is no room in their koran for infidels, and they will not stop until there are no infidels.

Adrienne..for ONE WORLD ORDER to be established somehow?

Fredd..the very idea that this idiot pres and Hillary can't see that pulling out HURT is enough for any thinking person to know she can't run this country....but, alas........heck, these are Dems who still believe her, or don't care she's a thieving liar...so, how can we be surprised?
Good cartoon!

Yes, it is very disturbing to know that millions and millions of my fellow Americans know that Hillary Clinton is a rotten, thieving scumbag liar and yet still plan on voting for her. Truly disturbing.

Fredd, unlike LL, I'm not an expert, but I will say this. If you kill a lot more of them than they kill of you, you tend to win. The Surge did that.

The Muslims think they can replicate the surge in Europe through immigration. I'll wager they get a nasty surprise.

Sources say the Rothschildren are betting both ways.

Pastor: I would have to agree with you that the muslim plan to over populate Europe and then declare sharia law throughout the caliphate will certainly meet with resistance.

I'm not sure how the Vatican will react, however, now that the Jesuits are calling the shots. Could go either way there.

I'd like to hope that Loyola's Society is returning to orthodoxy but perhaps that's wishful? Regardless, the Vatican and everyone else won't have a lot of choice when the shots are being fired and heads chopped off -- let's hope that kind of reset isn't necessary, but I don't see how it won't be.

Fredd, Not wanting to muddy the waters so to speak but the Vatican as you imply is not exactly,,,well Daddy's Vatican. If you have ever heard the term "Chrislam", this is where the Jesuit is headed IMHO. Also being aware of the Orders history within and without the Holy Sea, there can be no doubt as to which way the Jesuit will go, as he proves almost daily now.

Israel had better pay attention as well as Trump.

Christopher: It's certainly not John Paul II's Vatican, as he is turning over in his grave at the papal shennanigans going on these days.