Why Americans don't want another 'politician' in the White House 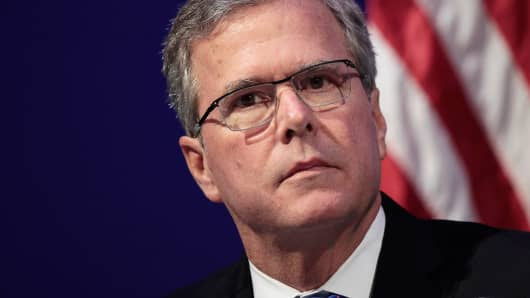 What are the presidential polls telling us?

On the GOP side, non-politicians like Donald Trump and Ben Carson are polling very well.  Democrats seem to like Bernie Sanders, who is hardly what anyone on either side of the aisle would call your run of the mill 'politician.'  Hillary Clinton's polling numbers are tanking each and every poll, going from a lead-pipe cinch for the nod to under 40% of approval.

The presumptive nominees' prospects on each side months ago are now  iffy, at best.  This includes career politicians such as Hillary Clinton on the Democrat side and Jeb Bush, a career politician on the Republican side.  Neither of these candidates have ever held a job of any significance outside of politics: neither has ever had to meet a payroll, make decisions as to how best to allocate privately held resources, or please a consumer base by providing any product or service that anyone wants or needs.  All either knows is how to win elections, or position themselves to win elections.

And "We The People" are sick to death of those who only seek power without understanding what the rest of us want out of our government.  This includes Hillary Clinton and Jeb Bush: we are sick of those guys.  Sick to death.

I don't want to launch into the shortcomings of Hillary Clinton as a leader, it would take way too much time and keystrokes.  Just leave it said that she is the last person America needs right now calling the national shots.

Jeb Bush wants to project himself as being able to deliver a better government to us in 2016.  And what does he base this on?  That his grandfather (Prescott Bush) was a U.S. senator?  His father and brother were U.S. presidents? Those credentials to me merely suggests that Jeb Bush feels he is entitled to lead us because he is related to career politicians before him.  He has said that he describes the invasion (yes, flat-out INVASION) by illegals into our country is 'an act of love.'  He says these people simply want a better life for themselves and their loved ones.

Jeb Bush is a huge supporter of the educational system called "Common Core."  This debacle of a scam of a sham of a system is concocted of leftist standards that protect teachers and teachers unions, and are dictated from on high from an over reaching federal government.  This alone should eliminate Jeb Bush from consideration.  How we teach our kids should be up to parents and local considerations, not the know-it-all politicians at the national level.  Common Core would more closely be associated with past similar efforts by Fidel Castro, Mao Tse-Tung and Josef Stalin.

And this 'act of love' he believes are motivating illegals invading our country?  His brother as president once stated that American 'compassion doesn't stop at the Rio Grande.'  These illegals are not invading us as 'acts of love.'  They merely want to suck off of the efforts of our fore bearers who died in many foreign battles to secure our way of life from those who would become dictators over us and enslave us.  These 'act of love' invaders respect nothing of our heritage, or our national sacrifices to make our country the freedom magnet that draws them: they want the goodies that the American way of life affords, but they do not want to pay any homage to our culture, our language or our institutions.  They will huddle in their own little ghettos, speak their own language, wave their own flags, and send their under-the-table money back to the 'old country', pay no taxes and suck off of our generous social programs, and then vote for the Democrats who allow them to be the evil and damaging parasites to our country that they all are.

These invaders are not driven by 'acts of love,' as Jeb Bush erroneously believes.  They are evil invaders, lawless and rotten to the core, and need to be repulsed and expelled.  Every stinking one of them.

Most Americans want our borders protected against invasion.  Career politicians don't seem to want this at all, and accordingly have not taken a single step to stop it.

Is it any wonder that Donald Trump's polling numbers are surging when he swears to build a great big, fat wall, evict all of the illegals and make Mexico pay for everything?

You do the math.  "Act of Love."  Bunk.  Crap.  Garbage.  We want nothing to do with any of that malarky.  Career politicians are killing our way of life, and we don't want to elect yet another clueless politician to move into the Oval Office.

They have saddled us with $19 trillion in debt.

And they think that it's a privilege for us to feed them. It's time to for America to tell them that they are wrong.

It's worse than $19 TRILLION, LL. Exactly how do we account for the trillions taken out of the Social Security 'lock box' and spent on everything else except Social Security payments, once LBJ decided to put the FICA proceeds into the General Fund?

No real way to access that number, but if I were to guess, the political ruling class has spent perhaps TWICE your stated amount: these crooked politicians have spent perhaps $40 TRILLION dollars of money that was never intended to be spent at all.

A pox on all of their houses. All of 'em.

No wonder we all hate their guts.

You're right on the amount. The theft is nothing to the absolute and wonton waste in terms of amount - how many uncounted trillions?

We sure as hell don't want a bush or a clinton.

The We/Us you speak of are now out numbered by those who have drank from the tainted well. How do we fix that?

I disagree that We/Us (aka the good guys) are in the minority nationwide. Those who have drank from the tainted well (the bad guys) are numerous (too numerous, for sure) but are not in the majority. They appear to be but only because their feeders herd them into buses bound for the polls. They in no uncertain terms preach to the moochers that if they want the gravy train to continue, they must get on those buses and vote D.

Additionally, the skullduggery and sleaze that Democrats go through to fudge the votes also tip the scale to their advantage (recall all of the Democrat votes in that trunk of Al Franken's confederate's car).

But disagree that the good guys are in the minority. Profoundly disagree.

Hillary may need her Communist/Socialist base she does not have much left but her welfare addicts. Hillary has a big problem, she can't win by staying out of the public eye, and hiding from the press much longer. Sooner or later she is going to have answer the tough questions... and she’s not used to that. I think that she has a lot more problems then the media is telling.

I think that not only Hillary has huge problems not reported by the media, but that Obama's fingerprints are all over the same territory of mishandling state secrets via personal devices. Just a hunch. Why else would Obama hesitate in unleashing the full power of the federal government onto a nasty piece of work like Hillary, whose guts he hates? Answer me that, Creig. I think if he did, the mud would splash all over him and his administration.

Fredd, I agree. I believe obama is as dirty if not dirtier than the hildebeast over Benghazi. Remember they both went and met with the families of those murdered at Benghazi and told the same bullshit story that both knew was bullshit.
That obama even Went there suggests to me that he was trying to do some serious pre-emptive damage control. When the F* did he ever go to meet the families of any white people in ANY other situation???? That's the tell my friend. He blinked big time.