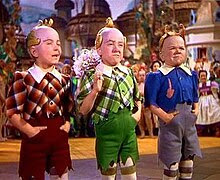 After a moment, Nod indignantly blurted out 'who the hell is Barack Hussein Obama?'
Posted by Fredd at 8:58 AM

Fredd, That's my Favorite scene of the movie. Who's your favorite? I like the coronor.

I must protest though. obama von imbecile can't have the smallest brain, it has to be the people who vote for him to be their leader.

I like the Cowardly Lion, portrayed by Bert Lahr: 'if I only had the noive' (or nerve, as they say outside New Joisey).

And true, the Guiness people are at a loss as to how to list over 100 million Obama voters as tied for the record for teensiest brains on record.