What's fair, and what isn't fair 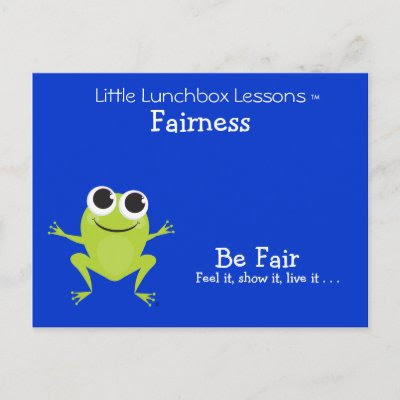 Last time around, Barack Obama ran his successful presidential campaign on the mantra of 'hope and change.'  It worked very well, as we all know.  Now, three years into Obama's abysmal administration, those two words are no longer uttered by anyone associated with the White House.  And for good reason: things in this country have gone downhill since he took office.  I could go into the metrics of exactly what parts of our country, to include social, political, and economic components are worse off today than in January, 2009, but I think most of us know all about it.

But this is all in the past, and our failed president is mustering his forces for a second term.  This time around, hope and change are not on the menu.  No, this time it's 'what's fair.'  Obama throws this word around like rice at a wedding.  Everyone should do 'their fair share,' 'millionaires and billionaires should pay their fair share,' and on and on.  Things should be 'fair.'

To the dumbest among us, this sounds right.  Things shouldn't be unfair.  That's just not right.  And here's a guy saying he will stand up and make things fair, if re-elected.

To those of us who are of at least average intelligence, we all know through living life that things just are not fair, in general, and that John F. Kennedy said it best: 'Loif.  Loif's not fayuh.'  And for those of us outside of Massachusetts, this better translates to 'Life.  Life's not fair.'  And we all know this to be true.

But this happens all the time.  All the time, and everybody knows this to be true.  While this example is a stark one, Obama will resort more toward a class warfare point of view, and point out that the working people in this country seem to have all the money, and are greedy because they won't give any of their hard earned money to those less fortunate, and work less. Or don't work at all.  Is that fair that these greedy working people keep all of the money to themselves, Obama asks? All people need money in this great country, Obama states.  And it isn't fair that only the most industrious among us have all the money.  Not fair at all.

Obama wants to end all of this unfairness using the hamfisted power of the government.  If re-elected, he will re-double his efforts to legally transfer the wealth of those who work in this country to those who don't work in the name of fairness.

And those dumb non-working morons will certainly vote for that, as it really sounds fair.  Why should these working people have all the money?  We non-working parasites need money, too!

True words, and a good Kennedy accent, too.

I like to ask liberals to define fair. That usually stops them in their tracks.

That accent could apply to Teddy, too, but wouldn't make any sense because Teddy wouldn't have said that.

That is, unless he added 'but if you elect me, I can make it fayuh.'

And remember, Obama is the last living Kennedy brother. So I guess this would actually make sense.

And speaking of Aussie accents and Kennedy's, would it be OK if we threw anothuh shrimp on the Bobbie?

I would love to hear that definition myself.

I'm sure liberal notions of wealth distribution seems fair to the takers. As far as the makers go, I have a feeling that fairness would not be the word they would use....

We need "fair" to be given a definition, very true. But one of my favourite questions to a liberal is to ask the question that none other than Lenin posed: "Who, whom?"

F.A. Hayek actually had a chapter in The Road to Serfdom entitled "Who, Whom?". In other words, Who decides what is fair? To Whom do these decisions apply?

The whole "fairness" argument is based on nothing more than emotion, or at least, emotive thinking. And if grown adults are still relying on their emotions only, and leaving logic out of it, they have no business holding office or making policy.

Obama has already shown us how he deals with 'fairness.' Recall early on in his administration, a Republican offered a solution involving tax cuts, and Obama said something to the effect that 'we won, you lost.' Accordingly he gives not a whit about how fair things are to the defeated minority (the 'whom').

And that is the way things go for all who are the arbiters of 'fairness' (the 'who' in Hayek's piece).

Fredd, I love ya man, but I gotta disagree here. I'll see if I can explain this properly.

You would agree that some people are practically born to be fighter pilots - perfect physical attributes and brains that can calculate how much fuel they'll need to have to fly with one engine, 1 JDAM left on the bad side of the plane, racing back to an aircraft carrier going an unknown speed in an unknown direction with unknown local air traffic upon arrival. IN like 1 second and a half. Without a calculator.
Then you got your guy of the same age, that is takes them 18 seconds Plus to find the Egga Muffin button on the cashier terminal at McDonalds.

With this in mind, realize that some people are productive, anxious to get to work and Produce, and other people - thought they would love to be like these folks, simply are not wired for productivity. Therefore their talent is staying at home, breeding, consuming mind altering substances and watching obama on TV while they lie on bed dreaming of a sexual encounter with same.

It's not their fault they are this way. God made them this way just like he made the fighter pilot. We, as Compassionate Conservatives should finally come to realize this and find ways to budget our households so that we can pay Our fair share as well, in order to maintain these no productive people in as close to the same standard of living that we enjoy.

And if we have any spare time, we should set up volunteer groups to do things like go over to their homes, cut their grass, shovel their snow, fix their plumbing, whatever, cause you KNOW they're not going to do it. It's not something they are capable of.

Man, do I have it wrong. Thanks for setting me straight, Kid.

You know, all sarcasm aside, in the good ol' days, those folks who now have difficulty finding the Egga Muffin button on the cash register at McDonalds, you know, the dullards, the dolts and the dummies, they all had productive positions in life: ditch diggers, grave diggers, hauling bricks with wheel barrows to skilled masons. We still need ditch diggers and grave diggers, as ditches and graves don't dig themselves.

Everybody did what they could, or they didn't eat. Worked pretty good way back when.

Now, like you said, those idiots all want to have the same lifestyles as the masons, even though they don't have the skills much beyond schlepping the wheel barrow.

Who put this notion in these morons' heads?

btw - QE3 from Ben on Tuesday? Regards Gold prices. I don't have an edge on it or how the market would react, tho I'd say short term gold higher, but I'm keeping the DZZ I think anyway.

Maybe it'll be a sell the news reaction(gold selling) Hmmm.

I'm not a day trader, and never will be. Might as well go to a casino for that kind of action.

Like I told you before, I will hold my DZZ until after a year or more of President Romney's administration, you know, where grown ups make the hard decisions.

Then gold will be where it should be: around $900 an oz or so. Much like the Carter malaise to the Reagan boom.

Kid sure set YOU straight, Fredd...and got me laughing.....

and then crying.
We are SO toast because nobody's standing up to this jerk who thinks FAIR is, well......the only fair thing. Man, that is SO wrong on so many levels there's nowhere to start.