OBAMA BUDGET STRAIGHT OUT OF FANTASYLAND 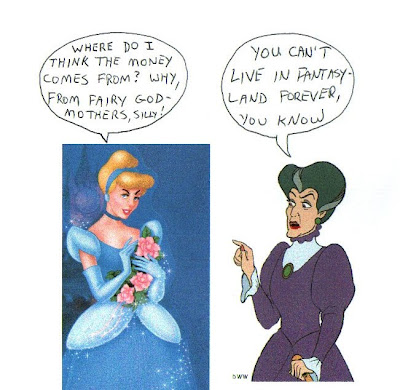 How can President Obama look us in the eye with a straight face and tell us that we all need to 'start getting serious about living within our means,' and in the very next sentence propose a $3.7 TRILLION DOLLAR budget for fiscal year 2010?
.
Estimates (which are always really poorly done) of revenues flowing into the treasury coffers this year range from $2.2 to $2.4 Trillion dollars, assuming that Obama doesn't kill our economy even further. Doing the simple math, that leaves us with a deficit this year of about $1.4 TRILLION DOLLARS.
.
Just this year. Our government is completely out of control, as there is no responsibility anywhere to be seen in Washington D.C. It just doesn't exist anymore. Any fool, rube or hayseed that just fell off the turnip truck knows that this level of spending is going to destroy our economy in short order. We just don't have this kind of money, and there is nobody in the current 111th Congress with any spines whatsoever if they pass this budget.
.
Now, Obama wants to put together a deficit committee to get to the bottom of this mess, and fix things. Right. This sophomoric maneuver is no more subtle than eccentric ol' Uncle Fredd imploring young 5-year old little nephew Billy to "aw go head, Billy, just pull my finger..." He thinks that the American voting public is as dumb as a couple of thousand bags of hammers.
.
This stupid committee is going to get nothing done, other than to give Obama some cover to continue to spend money like a drunken sailor, and to push through various taxes (such as the hated Value Added Tax) to satisfy the findings of this committee. Even a fourth grade 'C' student can tell Obama that to get this deficit under control, spending has to be curbed, and curbed with some muscle.
.
This entails that many entitlements need to be cut back, and the recipients will be caterwauling like stuck pigs, but we JUST DON'T HAVE THE MONEY! We don't!! Entitlements like Social Security, Medicare, Medicaid, unemployment benefits and food stamps are obvious candidates for the ax, and the 'third rail' theory be damned.
.
To think that the money fairy will continue to fly in, wave her wand and suddenly out of the sky a few trillion dollars falls into our hands (year in and year out) is just ridiculous. We have got to stop living in Fantasyland, and put an end to this crazy spending.
.
Because if we don't, I can tell you that a happy ending is nowhere on the horizon. This is the real world and not a fairy tale, and we, our children and grand children will all end up as beggars and vagabonds rather than riding off into the sunset in a pumpkin.
Posted by Fredd at 6:57 AM

Doofuses are that they are, they tied their hands behind them and also put on a blindfold.

If this is how His Thinskinnedness and his crooked cronies operate when he gets criticized, then we're are in much trouble on the world's stage.

Not only will everyone roll over him and America, he'll become even more of an embarrassment then he already has become... He'll cry. He'll whine. He'll run for cover behind the Angry First Lady's skirts.

Amazing, Rome burns and Obama doesn't even play a fiddle: He just whines and tries to get even.

This is just another example of smacking reality in the face.

Look at their still pushing the "climate change" (read; global warming)agenda DESPITE it being proven a fraud.

Actually I suppose they do know reality it is just they love to perpetuate fraudulant schemes so as to stay in power.

Nothing new here I suppose.

They are desperate now, as it appears the smoke and mirrors are not working.

Particularly with the wheels coming off the global warming hoax bus: there were gazillions of dollars to be shaken down from business, gubmint, oh man do the REALLY not want to give up on this one. They will go down with the ship to the last man, so much dough is riding on it.

I agree about the entitlements. They are the noose around our financial neck. Does it really make sense to give money away for doing absolutely nothing while the rest of us are told to tighten our belts? Sounds like true redistribution.

TKZ: 'entitlements.' It is flat out redistribution. That's gotta end.

I love how he blew trillions and then signed "Paygo," while declaring that we're spending too much money and it can't continue.

Does he think we're idiots?

Also, all the money he blew increased the budged baseline 50%, so a 5% "Cut" is really a 45% increase from the Bush years.

If anybody outside of government ran a scam like this they'd be locked up.

And he ordered a spending Freeze; that doesn't even count until a couple years out?
Hummm. Lets see-what could be in this secret bill? Could it be just in case he is not re-elected- this Spending Freeze Bill will hurt the Congress (Repub Majority), and maybe a Repub. Pres. Another ploy to bring down this country after he and the Dems. are not to be seen as the ones to be blamed?

He does indeed think we're idiots, since we elected him with despite his crappy resume, didn't we?

He constantly says contradictory statements, all within the same paragraph time and again.

Josef Goebbels would be proud of this guy, let me tell you. Him, and of course Saul Alinsky.

Are you saying that our president is setting fiscal 'booby traps' for an unsuspecting future GOP executive?

How unlike him (for liberal readers, this is sarcasm).

Their goal, ultimately, is to confiscate everything we earn and then spread it among the masses according to their determination of who is valuable to what degree.

Joe: of course, that would only be 'fair.'

...except to the folks whose goodies they have confiscated.

Transforming America, one trillion dollars at a time. I fear we may all be indentured servants before too long.

A friend of mine is a social worker and told me the following. You'll love it! It came up because I had told her that I've fed six of us for under $100 a week (breakfast, lunch and dinner because my kids brown bag it even though we qualify).

Woman in her mid-20's comes in complaining that she can't feed her family (two adults and a 3-yr-old) on the $140 a week she got in food stamps. Now $140 a week for food EXCITES me! But there's more. The 3-yr-old is on WIC. That's another $40+ a month in free food. Also, the child is in the Head Start program because of their low income (ie, free daycare at the public school). Her child gets free breakfast and lunch, plus an after school snack. In total, she's getting $175+ in FREE FOOD for THREE people every week!!!! And she's complaining it isn't enough!

But wait! There's more! Her husband had been laid off months and months earlier. BUT EVEN THOUGH SHE WAS THE ONLY INCOME, SHE QUIT HER JOB TO GO TO COLLEGE!!!

Since he was the only one collecting unemployment, their income was low enough that they qualified for free public housing and free utilities. She also qualified for all sorts of grants for college because she's a mom in a low income housing (that's right, she's going to school for FREE). On top of THAT, she also qualified for another grant that helps pay for some of the costs associated with driving back and forth to school. Free gas.

With their income being less that $550 a month, all three have free health care with no co-pay and no deductable.

So this is how their income works for one year:

Your post made me think about our conversation and I thought it was apropo as your post is about over inflated government budgets and the need to cut costs.

The country is chock full of free loaders like you described. These folks are perfectly happy being on the public dole, and are not ashamed of being there, using the public safety net as a hammock.

Or more accurately, laying sideways in the public trough.

I know a fireman in California who showed up after a fire to mop up a fire in a low income neighborhood, and a little black child came up to him and asked him how he could become a fireman, too.

This guy told the kid to stay in school, study hard, get his high school diploma and suddenly his mother interrupted this guy and harshly told him, 'don't you be tellin' him that! He's gonna grow up an' get himself some welfare and food stamps like the rest of us, don't be going and tellin' him that stuff, you hear!!?'

Fredd, I believe it. Went to school with girls who were taught by their mamas how many babies to have by what age so they'd never have to get a real job.