Italy is NOT the United States 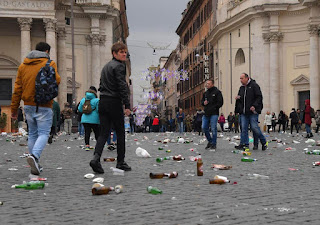 I've spent quite a lot of time in Italy.  Not recently, but the times have not changed all that much.  My first sojourn into this backward country was a real shocker, however.

As a young soldier in the U.S. Army, I took a 30-day leave to travel around Italy along with two of my army buddies.  We took the train from Munich, West Germany and headed south to the land of wine, pasta and sunshine.  What a heaven on earth to spend a long vacation, or at least that is what I figured would be the case.

The train trip was uneventful, until we got off at the train station in Bolzano in the northern part of the country.  I had to relieve myself and went into the public restroom facilities at the train station.  This is where the stark differences between Italy and western civilization diverged: the urinal was just a ledge against the wall, and the "toilet" was simply a couple of concrete wedges to place your feet located in between a 6" hole in the floor.   And toilet paper?  None to be found.

I was a 21 year old corporal (actually what is called a Specialist 4th Class, same same), and had been in the service for 2 years by then: I knew how to cuss like a sailor, spit and hawk loogies with the best of them, and how to generally act like a miscreant.  But this took me by complete surprise.  What the hell was this?  I might as well have looked for a stand of bushes, it would have smelled better; the fetid stench inside this 'facility' would have made a buzzard puke.

The whole country is filthy.  The restaurants, the buses, the cabs, the people.  Filthy dirty.  And we adjusted to this culture quickly.  We rented a car, and noticed that nobody obeyed the street signs, stop signs, and drove on the sidewalks if they needed to, which they all seemed to.

When in Rome, as they say.  So we threw out all of our western politeness that our mom's taught us, and actually had a pretty good time down there.  What the hell.  In 1976, we could buy a 750 ml bottle of white wine for approx. 25 cents, as the lire to the dollar exchange rate was quite attractive at the time.  We lived like kings for a month.

Now the place is ground zero for the Wuhan virus.  It is spreading like wildfire, with no end in sight.  I am not shocked.  Their health care system is probably no different than their train station restrooms: let's just say they are 'lacking.'

Just like their justice system.  They treated a shy college kid, Amanda Knox, like she was Charlie Manson.  They trumped up ridiculous charges of her murderous rampages (of which she had nothing to do with), and kept her in jail for the better part of two years before she was finally exonerated.  Yes, justice in Italy is probably very similar to health care in Italy.

Of course, things may have changed since I was there.  Probably not, though.
Posted by Fredd at 11:08 AM

I was based in Milano as late as 2008. I am not going to blaggard them as thoroughly as you have, but the place is dirty and it's not Germany or Switzerland. There are resort places around lake Cuomo that are exceptionally nice and there are open sewers which defines Venice. Italians hug, they hang out, they have very little concept of personal space and it's working against them. They imported well over 100,000 Chinese from Wuhan to work in the textile industry in Northern Italy.

And they're reaping the rewards of bringing the yellow peril home.

The Chinese plague is thinning out those over 75 quite effectively.

Careful there, Fredd, someone will call you a white nationalist! - lol

LL: yes, I was also in Venice to smell those open sewers in person. I've heard that this Wuhan virus is adversely affecting quite a few of those under 60 as well. At the end of the day, the Italians deserve to be blaggarded, they are barely what we call civilized. And to think that the Roman Empire was once the ruler of the known world. My, how times have changed.

My aunt (mother's sister RIP) was quite the world traveler. I always remember her saying that when you crossed the border from Switzerland to Italy the difference was stark. Switzerland was spotless and Italy was a pig sty.

I've never been there, but my Italian grandparents (Calabria) never, ever said they missed Italy. They loved America and were proud to be Americans. And they wanted their sons to marry "smart American girls."

LL - They imported well over 100,000 Chinese from Wuhan to work in the textile industry in Northern Italy.

I never knew that. But it doesn't surprise me either.

You get the label, even though what you say is factual.

I am stunned reading this; never would I have imagined Italy in such condition. The street in the picture is deplorable enough. Guess there's probably areas in our own country in same deplorable condition also but not here where I live - We take pride in our environment.

Adrienne: I too noticed that stark difference crossing the Swiss border. Completely different cultures. You cross from western civilization to something else.

Caddie: yes, just walk down the streets of Patterson, New Jersey (the Garden State), and the trash is knee deep, the place is a rat's nest. Lots of other pig sties in the US as well, but not the whole country, like exists in Italy.

Fool: a label I wear like a badge of honor.

Italians tend to be germophobes, and the WHO put their medical system as the second best in the world last year.
You're right about the chaos in Italy, but the virus has taken hold in the richest and most organised cities of the North. Also the cities with the highest number of Chinese and international flights......

Sam: the Italians that I saw with my own eyeballs were not what anybody would call germophobes. And the WHO, their credibility is suspect these days.

Good read. I spent most of 1990 in England. Northampton, couple miles from Diana's parents place in New Duston. I was project manager for a software project for a huge company called MFI.
(A funny.. I had to inform them what most Americans would think when they saw "You won't believe your MFI's" on the side of their trucks)

Well, main point of this is that young Americans should be required to live in Any other country for a couple years on their own money. They'd get more of an education in those two years than they'd get from 12 years of school and 8 years of university in the USA.

Kid: living abroad made me realize how good we have it back in the good ol' US of A.

THe standard of living in both Germany and Italy from what I saw was pretty low; small little apartments, nobody owned a house unless your were wealthy, nobody drove cars, and the ones they drove were little puddle jumpers. They were essentially poor. Most Italians, and most Germans.

Exactly Fredd. I remember people would rush out and soap their cars down when it was raining to save on rinse water cost. And this was a fairly upper middle class neighborhood. in New Duston.

These kids don't have a clue.

I flew into Italy on March 2nd and spent 5 days on the Amalfi Coast and 2 days in Rome. Your description is not even close to what I saw. It is not pristine but it isn’t dirty either. Rome is a lot cleaner than NYC.

Traffic was well behaved on the coast and in Rome. I spent several hours on a Jump Bike—a bike share that is part of Uber—and I felt very safe. Rome is old and could use a little TLC.

I was treated very well and think that the people are very nice.

And Russia. 143 million people, 90+ % of them living in one bedroom apartments within large apartment blocks and the rest in rural areas living in structures that would be condemned in the US. Yaaaaaaaaaaaaaaaaaa ! Right? comments on rt.com indicate that Russians Actually support this lifestyle...

Band: Hop on your jump bike and take a trip to Bolzano, then tell me how clean things are in Italy. I also thought that the people were very nice and I was treated very well, never said anything to the contrary.

But they live like pigs. Also, saying that Rome is cleaner than NYC is not saying much of anything. NYC used to be a lot cleaner until DeBlasio blew into town.

I've been told by people who've been there, worked there, were stationed there, and even by those who have been born there and lived there their entire life that northern Italy was quite nice compared to southern Italy, and that the differences were stark. I can only imagine what Taranto and Palermo must be like (actually, I knew a family stationed at the NSGA 'dinosaur cage' that used to be near Taranto way back when). In fact, I was told by a Polish immigrant (paraphrasing), "Don't bother going. The architecture and art is wonderful, but you don't want to deal with the prostitutes, pickpockets, and dirt." Of course, he was only in Naples and environs, with a trip to Rome. My wife and I will go, eventually (all vacation time has been spent with parents, mine now both passed, but both of hers with Parkinson's), but hopefully we will stay in better places.

Didn't post? If it's in moderation, please delete this, Fredd.

Larry: Italy has great art, architecture, history, all of that. But the culture there just seems to be perfectly OK with the dirt everywhere. Filth seems OK with Italians, just part of life. That, and pickpockets. Forgot about those guys.

I'd forgotten about Amanda. Whoa.

But... back in the 90s I stayed in Milan and Como (nice). Both were pretty teutonic -- clean, ordered etc, which surprised me. The South? Different again, as you say.

Maybe we should point the .357 at "diversity" and globalism, the same D&G which convinced Lombardy to sell and staff its factories with Chinamen and the idiot Mayor of Florence to launch an idiotic PR campaign, "Kiss a Chinaman."

That didn't age too well, eh?

Kid, did MFI use Lotus Notes in the '90s? I think it may have been a client (I was on furlough from the priesthood...).

I don't know about them using Lotus Notes or not. There was a lot of technology there but I was only associated with their Digital VAX system we were developing the software on which was written in Dibol.