With the death of Tim Russert, 'Meet the Press' anchor and successful political commentator several years back, this highly rated Sunday talk show was then taken over by uber liberal socialist, David Gregory.  Since then, the ratings of Meet the Press have been sliding into the basement.  Now its ratings are completely awful, and NBC execs, rather than fire this raging Marxist, have hired psychologists to treat David Gregory and even go so far as to have these shrinks interview his friends and his wife.  These NBC poobahs are convinced that if they find out why people don't like David Gregory (HE'S A RAGING MARXIST WHACKO, GUYS!!"), then they can alter his delivery to suit their audiences' tastes, and turn ratings around.

NBC execs are bound and determined to keep this raging Marxist in place, a liberal whose crackpot communist philosophical views anger at least half the nation on a weekly basis.   Gregory will in the short term at least remain as host of Meet the Press, God Awful ratings be damned.  The shrinks will fix things.

This plot is straight out of a 38 year old Hollywood script: "Network."

Decades ago, this movie was released that gave us the phrase 'I'm mad as hell, and I'm not going to take it anymore!"

"Network," starring an aging William Holden as an over the hill network executive and Faye Dunaway, the young fresh upstart mover and shaker in the news business, depicted a fictitious TV network that was suffering ratings blues, and took steps including murder and sensational madmen TV anchors to  bolster their sagging ratings.

Peter Finch played the madman Howard Beall, who in the throes of awful ratings, announced one day on the set that he was going to kill himself on live TV.  The execs in the studio were aghast, and then when the following day they noticed that the ratings went ballistic on their news hour, with the entire nation tuning in to see what happened next, young Faye Dunaway ran with it.

Howard Beall then was the hit dujour, and his ratings saved the network in the short run (no, he did not kill himself on live TV, as it turns out). He just started ranting and raving about everything in general.  Then, in the fullness of time, Howard's rants and raves started to sour with the public, and Faye Dunaway wanted to can the creep.

Here's where the plot thickens: the owner of the network, a super rich shadowy figure portrayed by Ned Beatty (Mr. Jensen), stepped in and insisted that Howard Beall be kept on the air, regardless of ratings.  Mr. Jensen liked the morose, bad news that Howard Beall continued to spew, as in his view this was the philosophy he supported, and was good for his business ventures overall.  Jensen did not care a whit whether Howard Beall's newscasts LOST money, he was to be kept on the air regardless the ratings. 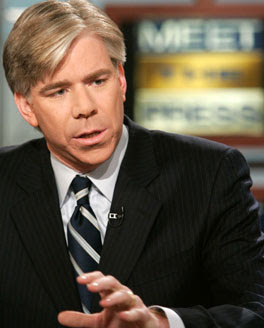 The way the writers ended 'Network' was to assassinate Howard Beall.  I wonder how NBC will finally pull the plug on David Gregory?

The 'revenoo-ers' are coming for you, too

I would guess that nobody under the age of 50 will read this post, as all of those young whipper snappers are all committed heart and soul to their Facebook pages and have human contact only via 140 characters or less on Twitter.

Accordingly, I will jack up the font and address this for those of us who need cheater glasses (at least) in order to read it.

Most of you probably remember John Rose's old cartoon "Snuffy Smith" (a spin off of an even older cartoon, 'Barney Google'), where a poor backwoods Appalachian moonshiner and his wife, Weezy, scrapped a living off of the land where they could, and Snuffy would cook up some corn squeezin's with his still.

Snuffy was constantly on the alert to roaming 'revenuers' or as I like to spell them as did Snuffy as 'revenoo'ers.'  These revenoo'ers were from an unnamed federal agency, probably back in Rose's day the Department of the Treasury or perhaps the IRS, and now are represented by the Bureau of Alcohol, Tobacco and Firearms. In any event, these revenoo-ers were constantly trying to smash Snuffy's still, and Snuffy was constantly shooting back, protecting his property from these over reaching revenoo-ers.

Now we are seeing a modern day Snuffy Smith, Nevada rancher Cliven Bundy, fending off the power of the over reaching federal government in the form of the Bureau of Land Management (BLM).

These BLM revenoo-ers have unilaterally decided in 1993 that some desert tortoises on this land that was used by this rancher to graze cattle were threatened by this grazing, and the BLM withdrew his previously granted grazing rights.  When asked why this decision was made, a simple statement was issued that the tortoise and its habitat were adversely affected, and that grazing rights were no longer allowed.

The tortoise is threatened?  Sez who?  Sez the BLM.  When asked for the data supporting this decision, none was ever provided.  This data has been requested for decades now after this 1993 unilateral decision to protect this threatenened tortoise, and these requests have been ignored to the present day.

And this seems to be how things work now.  An unaccountable, unelected bureaucracy makes decisions that impact Americans, and no recourse or grievance is allowed.  No sir.  Just do it, peons.  The U.S. government has spoken.

Hopefully we wake up, and see just what is going on in Nevada currently.  On the surface, a guy is ignoring the law.  A law made up out of whole cloth, voted on by nobody, and accountable to nobody.  What kind of law is that?

If we stand back and allow the BLM to win on this, by upholding this 'law' and crushing this little rancher, then the precedence has been set.

They came for Cliven Bundy's cattle.  The revenoo-ers can come for you, too.
Posted by Fredd at 5:14 PM 10 comments: