'Homelessness" is a choice 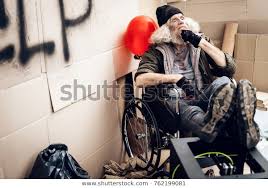 You can call them whatever you wish: the homeless, the real estate-challenged, the un-housed, or put some other happy face on these wretches.

As for mean spirited, black hearted ol' Fredd, I call them what they have always been called by rational people: vagrants.  That, or bums, vagabonds, ne-er-do-wells, miscreants, hobos, I'm sure there are a few more accurate terms out there that don't come to mind right now.  In any event, these people who choose to live on the streets and sponge off of the crumbs of society have indeed made a choice: to live like animals on the mean streets of America.

America has many freedoms that other countries deny their citizens; the freedom of assembly, the freedom of speech, the freedom of religion and yes - the freedom to fail.  We don't demand that anybody succeed in anything.  We encourage success, but success is not mandated.  You can bomb out in life if you want to here in the Land of the Free and Home of the Brave.

We Americans have also been generous to a fault in years past to accommodate those that are for whatever reason down on their luck.  Churches have historically reached out to the down and out.  Charities such as the Salvation Army, Goodwill and St. Vincent DePaul, all are still around and willing to lend a hand to those who need it.  There are still food banks, soup kitchens, warming centers and lots of Americans that donate to all of these charitable efforts even as we speak.

But the vagrants that choose (and yes, they choose) to turn their back on efforts to help them should not garner any pity or empathy whatsoever from polite society.  There is every manner of help for these vagrants should they want it.

There are many factors that put people out onto the streets; drug addition, mental illness, stubbornness in turning their back on their families and friends who want to help them.  Or just flat out laziness.  And a myriad of other factors as well.  All of them are choices, with the exception of mental illness, and often that is a result of poor choices in life leading up to what many would consider mental impairment.  You try and live in Chicago on a grate in January, and then tell me how clearly you are thinking lately.

Back in the day (25 years ago or so?) there were still vagrants here and there, but nothing like the infestation in major urban areas we see today.  Back then, vagrancy laws were in place and enforced; if you had no visible means of support, and you caught the attention of a law enforcement agent, you would be picked up and put in jail.  At that point, the police would attempt to find your family or loved ones to see if somebody could bail you out and vouch for your future conformity to laws on the books, such as loitering, vagrancy, disturbing the peace, trespassing or public indecency such as defecating or urinating in public.

What is now different today than it was in days gone by with regards to the explosion of vagrants on our streets?  Simple: we have bleeding heart liberal politicians who tie law enforcement hands in enforcing the laws that are still on the books: disturbing the peace, public indecency, trespassing and so on.  The local voters who put these politicians into office desire their neighborhoods and businesses be bombarded by the pesky vagrants; they must, since they vote into office these bleeding heart pinkos who desire more homelessness (vagrancy), not less.  Voters want more vagrancy, they must according to the numbers of vagrants we see on urban streets, so many that law enforcement agents must step over without so much as making eye contact.

Homelessness is a choice; and so is putting up with it.  Notice there is not one single bum living on a sidewalk anywhere in Belair, CA.  Or Beverly Hills.  The residents of these upper crust cities will not have it.  Nor do you see any bums on the streets of Snyder, TX, Gadsden AL or Goshen IN: small town folks don't put up with this nonsense, either.

Citizens of LA, Chicago, Salt Lake City, and San Francisco: you need to vote out your current liberal governments, and start policing up these vagrants.  Folks without visible means of support and the drug addicts/mentally impaired need to be incarcerated.  Just like days gone by.  Those who have any brains will get jobs to avoid incarceration, and those nuts/drug addicts will languish in prison.  Which is where they should be, not on the streets.

I'm not sure some of the mentally ill have much choice.

Gorges: the mentally ill need either institutionalization or incarceration, either way they need to be removed from polite society. Back in the day, we would stone them (old school), burn them at the stake (witches, too), lock them up in loony bins (a bit more civilized) and jailed. Regardless, we can't have them wreaking havoc on us because their brains are broken. They have to be isolated.

ANd I know they don't have a choice. When your brain is broken, that's bad.

Google "The Floating Population" in China. There are roughly 250,000,000 homeless people in China that are driven out of the cities and live in hobo jungles. It's not an American problem alone. There are almost as many homeless in China as there are people in the USA.

Putting the insane into asylums is an act of kindness. When they are on the street, they usually end up as victims.

LL: China has more problems that anyone knows, especially when it comes to their huge population. 250M is a LOT of bums. Boy howdy...

The insane, when on the street, by definition do not know right from wrong, and do wrong things virtually every hour on the hour. They need to be rounded up and isolated, maybe ship them off to the hobo jungles in China. Then again, President Xi might rankle at that suggestion....

Kid: 90% sounds pretty close to the number that I believe to be reasonably accurate. 10% are just plain nuts. Both of them need to be off the streets one way or another.

It is so far removed from any cogent thought I have to be homeless. I can remember being on the brink and heading out and getting a job in one day. Some of those jobs were pretty ugly, but it sure beat living on the street. Besides, if I ever ended up in a homeless camp, my first act of business would be to clean it up, plant flowers, and otherwise "decorate."

That seems to indicate that most of us are with you: to be homeless or not to be homeless, that is the question - only .003 of us choose this option. And NONE of those who choose to live on the streets are inclined to spruce up the place like you, Adrienne.

Sheeesh - I keep forgetting that you're LuckyDuck, Fredd. Thanks for reminding me over at my little corner of the internet.

I never rented a house or apartment that I didn't immediately start putting in some sort of garden or landscaping, painting the walls, and otherwise "decorating." It's an obsession.

I remember my first trip to western Canada and seeing small towns where people were living in itty little houses, but all the houses were painted and had beautiful gardens. I was beyond impressed. You don't have to have a ton of money to appreciate beauty.

As we "speak" I''m busy decluttering and rearranging my abode. Hubby may be heading into stroke territory. He, like most men, hates change.

We have always had what we used to call hobos and bums. For the most part, if they
they were hungry, they would beg for food and many would work a week or two to
make some money. Then they would hop a freight train and move to another city.
The current homeless crisis was initially caused by leftist civil libertarians
who convinced many states that it was cruel to keep people in mental institutions
against their will. Many of them were a danger to themselves or others and belonged
in institutions.

Santa Monica CA was a beautiful city until they declared themselves a sanctuary
city and it drew drug addicts and alcoholics like a magnet. Santa Monica (the original
sanctuary city,) went to pot once it made that move. Now, there are drug needles,
trash, human waste, and empty wine bottles all over the place. The mentally ill
caused violent crime and murder rates up.

There is one more insane liberal policy to blame for this mess. Starting in the early
80s, the government in their infinite wisdom declared drug addiction and alcoholism a
"disability," which led to other problems. It made them eligible for disability
benefits. Some government programs were created to pay liquor stores to provide
them with alcohol and Methadone clinics sprouted all over the country. These "clinics
are situated in Sid Rows, near trailer parks and other low rent districts. An
"unintended" consequence of this insanity was a steep increase in property and violent crimes. If these people were not being paid by the government, if you discount the mentally ill, the alcoholics, and drug addicts, the myth of homeless families would evaporate. I ran out of damns to give decades ago!

Unknown: all true. The polite citizens in these liberal meccas of idiocy usually move to more civilized environs. The tax base in these liberal dumpster fire cities accordingly declines, and things just spiral down and you get Oakland, Santa Monica, San Francisco and other toilets where the taxpayers that stay just ignore the mess. No way to live, if you ask me.

They were called "Sturdy Beggars" in Elizabethan England and they're a right menace now. See how they multiply in Democrat run cities. But I like LL's compassion and think of the Saints, without exception they cared for the poor.

Now, part of that medicine might mean stopping dependence on the welfare state or even, please, getting rid of socialism altogether. But what do I know, just a padre.

Padre: How far we now have come, from Sturdy Beggars to Filthy Degenerates (the same professions, all). Large liberal cities grow them like a crop, because come election time they round them up in buses, drive them to the polls and tell them there's a pack of Marlboros in it for them if they select every candidate with a D behind their name.

And once the polls close, I doubt they even bus them back to the sidewalk that they originally grabbed them from.

This abuse of our electoral system works, sadly. There oughtta be a law. Oh, that's right, there is one, but it is never enforced (by liberal police forces with standing orders to look the other way).